The John McKenzie Real Estate Team. University proponents host open house. The Zen lands were busy last weekend, with curious visitors checking out the property and enjoying lunch courtesy of proponents lobbying for approval to build a university on the site. 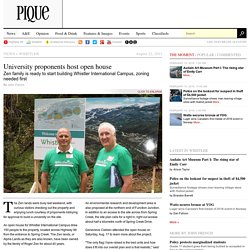 An open house for Whistler International Campus drew 150 people to the property, located across Highway 99 from the entrance to Spring Creek. The Zen lands, or Alpha Lands as they are also known, have been owned by the family of Roger Zen for about 40 years. Zen was on hand to answer questions. He said the open house was an opportunity to give Whistler a chance to visualize what it might be like to have a university in the resort. "It was to bring awareness to the community and allow people to come actually on the site and see it for themselves, what the site is all about and what it could look like," said Zen. Over the many years that his family has owned the land nothing substantial has been done on the property. "This particular project, we're really excited about it," said Zen. 8630 Merry Island Esplanade Halfmoon Bay BC V0N1Y1 - Gail Brachat - Sutton West Coast Realty Gibsons. Halfmoon Bay BC - the centre of the universe on BC's Sunshine Coast.

Almost all of Halfmoon Bay is accessed via Redrooffs Road, a turnoff to the left when approaching the big hill outside of West Sechelt. 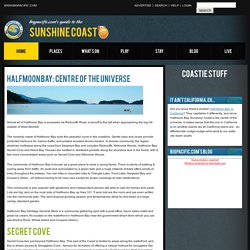 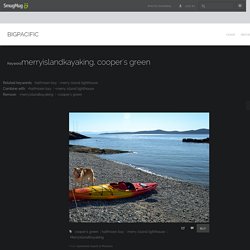 How to Install In Ground Swimming Pool Liners in 5 Minutes or Less - LinerWorld Demo Video. Sechelt Visitor Centre. Halfmoon Bay lies along the waterfront starting about 10 km north of Sechelt. 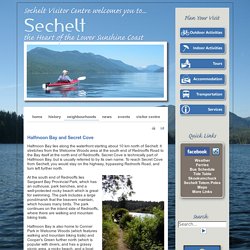 It stretches from the Welcome Woods area at the south end of Redrooffs Road to the Bay itself at the north end of Redrooffs. Secret Cove is technically part of Halfmoon Bay, but is usually referred to by its own name. SCRD. Population 2,675 (2011 Census) Growth rate 8.7% (2001 Census) Dwellings 1,118 occupied private dwellings Area 1,275 sq. km. 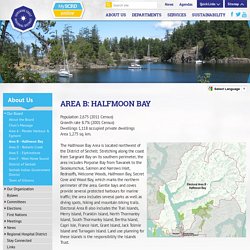 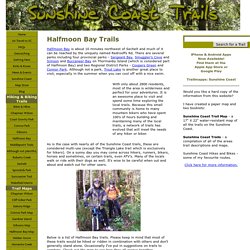 There are several parks including four provincial parks - Sargeant Bay, Smuggler's Cove and Simson and Buccaneer Bay on Thormanby Island (which is considered part of Halfmoon Bay) and two Regional District Parks - Coopers Green and Connor Park. Although not a park, Trout Lake is another great place to visit, especially in the summer when you can cool off with a nice swim. With only about 2800 residents, most of the area is wilderness and perfect for your adventures. It is an awesome place to visit and spend some time exploring the local trails. Because this small community is home to many mountain bikers who have spent 100's of hours building and maintaining many of the local trails, a network of trails has evolved that will meet the needs of any hiker or biker. 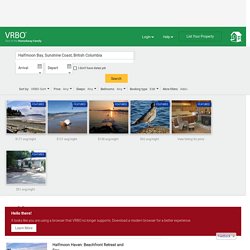 "We were more than pleased with the cottage, sitting on the deck with such a great view in such privacy was so serene and relaxing, the hot tub also had a spectacular view. MORE ABOUT THE SUNSHINE COAST AND SCEHELT, PART 1. Photo Gallery - Burchill's B&B by the sea. Brunch at the Rockwater Secret Cove Resort and Spa (Halfmoon Bay, BC, Sunshine Coast) They had me at frittata. 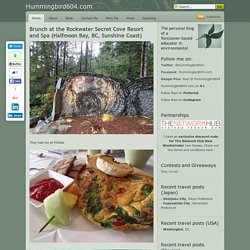 I knew that our Sunshine Coast Art Crawl 2011 might not have the opportunity for a longer stay at the Rockwater Secret Cover Resort and Spa in Halfmoon Bay (although I’ve wanted to visit for a long time now), but I was thrilled when I was told that the Rockwater had invited us for brunch. As I said above, they had me at frittata. I ordered a frittata (at $16 price point, absolutely reasonable with regards to any other hotel or even brunch spots in Vancouver), which was delicious. The coffee was spectacular and the service was simply outstanding. Toronto in Vancouver, July 2010 528. Halfmoon Bay Home. 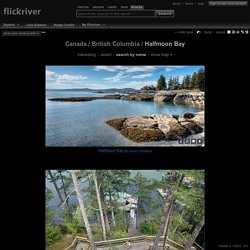 You can place your badge on your Flickr profile, Blog or Website. Add to your iGoogle or Netvibes page Flickriver widget for iGoogle or Netvibes can display almost any Flickriver view - most interesting today, by user, by group, by tag etc. Once added to your personalized homepage, just edit widget settings to select your desired view. Clickr on one of the buttons below to install: Embed on your Web site To embed this view, Copy and Paste the following HTML code: Black background (preview): White background (preview): Firefox and Chrome addons Adds a 'Flickriver' button to your browser. Install in FirefoxInstall in Chrome Search plugin Add 'Search on Flickriver' to your browser's search box. "View on Flickriver" Greasemonkey script Also, allows quickly viewing any Flickr photo on black background in large size. Sunshine Coast Day 4 – things to do in Halfmoon Bay. Smuggler Cove is our destination this morning – a half-hour drive up the highway, just past Halfmoon Bay. 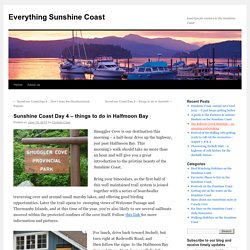 This morning’s walk should take no more than an hour and will give you a great introduction to the pristine beauty of the Sunshine Coast. Bring your binoculars, as the first half of this well maintained trail system is joined together with a series of boardwalks traversing over and around small marshy lakes, and offering good birding opportunities. Later the trail opens to sweeping views of Welcome Passage and Thormanby Islands, and at this time of the year, you’re also likely to see several sailboats moored within the protected confines of the cove itself. Follow this link for more information and pictures. 15 Best Halfmoon Bay Cabins on FlipKey from $95.00 - Vacation Rentals in Halfmoon Bay, BC.

Rutherford Carriage House in Halfmoon Bay. Bedrooms: 0 Bathrooms: 1 Sleeps: 2. Small Town BC: Halfmoon Bay. Halfmoon Bay, British Columbia Live Weather Report. Sunshine Coast Canada, BC. Rutherford Carriage House - Cottages for Rent in Halfmoon Bay. Romantic getaway for 2 in a fully furnished and self-contained waterfront suite. This new studio Carriage House has a king-sized bed, full kitchen, full bathroom and full laundry facilities making it possible to get away and have everything you need for a night, a weekend or longer. The views and water access are stunning. Public beach access and the local pier are steps away. Halfmoon Bay BC - the centre of the universe on BC's Sunshine Coast. 7 days Tidal Predictions - Tides, Currents, and Water Levels.