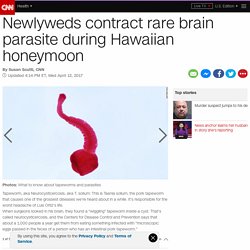 Instead, they experienced a minor hell. "I've had several operations, two pneumonias, a blood clot; right now, I'm dealing with a kidney issue," Manilla, an audio producer and lecturer at the University of California at Berkeley, told CNN affiliate KHNL. Each of these serious maladies was spurred by rat lungworm disease, contracted during his stay in Hana. Rat lungworm, a parasitic disease caused by Angiostrongylus cantonensis, affects the brain and the spinal cord, according to the Centers for Disease Control and Prevention. It's prevalent in Southeast Asian and tropical Pacific islands, but the geographic range of this parasite appears to be spreading across other areas, including Africa, Latin America and the United States. 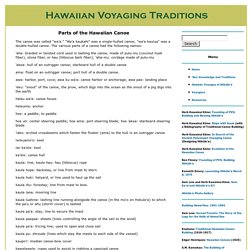 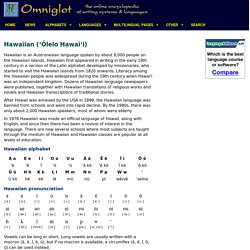 Hawaiian first appeared in writing in the early 19th century in a version of the Latin alphabet developed by missionaries, who started to visit the Hawaiian islands from 1820 onwards. Literacy among the Hawaiian people was widespread during the 19th century when Hawai'i was an independent kingdom. Hawaiian Dictionary Online Translation LEXILOGOS. Hawaiian dictionary Hawaiian ʻŌlelo Hawaiʻi Hawaiian language Texts & Literature •online books(Ulukau) 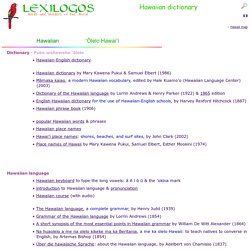 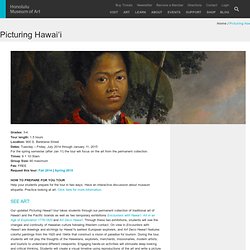 Beretania StreetDates: Tuesday – Friday, July 2014 through January 11, 2015For the spring semester (after Jan 11) the tour will focus on the art from the permanent collection.Times: 9 + 10:30amGroup Size: 60 maximum Fee: FREE Request this tour: Fall 2014 | Spring 2015 HOW TO PREPARE FOR YOU TOUR​Help your students prepare for the tour in two ways: Have an interactive discussion about museum etiquette. ​ Practice looking at art.

Click here for more information.​ Our updated Picturing Hawai‘i tour takes students through our permanent collection of traditional art of Hawai‘i and the Pacific Islands as well as two temporary exhibitions Encounters with Hawai‘i: Art in an Age of Exploration 1778-1820 and Art Deco Hawai'i. Hawaii’s Hurricane History. In August of 1994, Hurricane John became the most powerful hurricane in Central Pacific history as it passed south of the Hawaiian Islands (the Big Island is visible at top center). 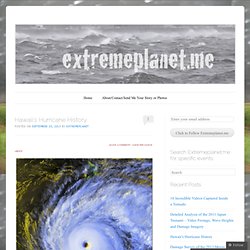 At peak intensity, the category 5 storm had surface winds of 175mph and gusts in excess of 200mph (CPHC, 1994). Meteorologists once believed that the Hawaiian Islands were largely protected from hurricanes due to their unique position in the Central Pacific Ocean. Despite residing entirely within the tropics, the island chain is well north of the Intertropical Convergence Zone and within close proximity to an area of cool water which inhibits tropical cyclone development. A semi-permanent high pressure ridge north of the state also helps protect the islands from storms that deviate from the hurricane belt to the south. Additionally, massive shield volcanoes in excess of 13,000ft on the Big Island appear to act as natural buffers against hurricanes traveling from the Eastern Pacific. Hawaiian Wedding on Pinterest. Pele and Lava Rocks. Claim: Tourists who have taken rocks from Hawaiian beaches have returned them in hopes of ending streaks of bad luck. 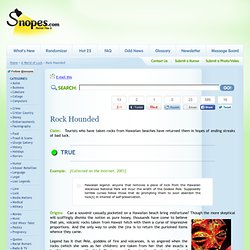 Example:[Collected on the Internet, 2001] Hawaiian legend: anyone that removes a piece of rock from the Hawaiian Volcanoes National Park will incur the wrath of the Godess Pele. Supposedly terrible curses follow those that do prompting them to soon abandon the rock(s) in interest of self-preservation. Origins: Can a souvenir casually pocketed on a Hawaiian beach bring misfortune? Though the more skeptical will scoffingly dismiss the notion as pure hooey, thousands have come to believe that yes, volcanic rocks taken from Hawaii fetch with them a curse of impressive proportions. Legend has it that Pele, goddess of fire and volcanoes, is so angered when the rocks (which she sees as her children) are taken from her that she exacts a terrible revenge on the thief.

Pele, apparently. Please take this sand and put it back somewhere on your island. Please return to soil. Hanalei Colony Resort (Hanalei, United States of America) The condominium resort occupies a scenic stretch of golden-sand beach. 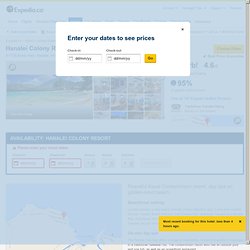 Although corals make swimming difficult off the resort';s own beach, numerous water activities are available within two miles. Tunnels Beach is a popular swimming beach one mile from the resort, while coral-covered lava tubes and reefs make Tunnels Beach and Kee Beach, 2.75 miles from the resort, prime spots for snorkeling and diving. Guests at Hanalei Colony receive preferred rates for tee times at two of Hawaii's top golf courses, both designed by Robert Trent Jones, Jr., and located nine miles from the condominium resort. The Prince Course offers 18 challenging holes of golf integrated with nature.

The Makai Course consists of three nine-hole courses that can be played in any combination. Hanalei Bay has one of the world's longest and most challenging surf breaks; winter is the high season for surfers. The resort has an outdoor pool and spa tub; yoga classes are offered through the Hanalei Day Spa. The Hukilau Song - The Hukilau Song (key of C).pdf. Cordyline fruticosa. Cordyline fruticosa is an evergreen flowering plant in the Asparagus family, Asparagaceae, known by a wide variety of common names, including Cabbage Palm, Good Luck Plant, Palm Lily, Ti Plant, Kī, Lā‘ī (Hawaiian), Tī Pore (Māori), Sī (Tongan), Lauti (Samoan), and ʻAutī (Tahitian). 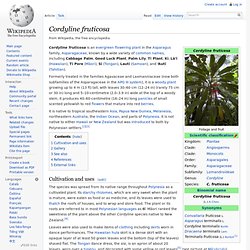 Formerly treated in the families Agavaceae and Laxmanniaceae (now both subfamilies of the Asparagaceae in the APG III system), it is a woody plant growing up to 4 m (13 ft) tall, with leaves 30–60 cm (12–24 in) (rarely 75 cm or 30 in) long and 5–10-centimetre (2.0–3.9 in) wide at the top of a woody stem. It produces 40–60-centimetre (16–24 in) long panicles of small scented yellowish to red flowers that mature into red berries. It is native to tropical southeastern Asia, Papua New Guinea, Melanesia, northeastern Australia, the Indian Ocean, and parts of Polynesia. It is not native to either Hawaii or New Zealand but was introduced to both by Polynesian settlers.[2][3] Cultivation and uses[edit] Gallery[edit]

Plant Care Guides. Plumerias are tropical trees famous for their gorgeous flowers which are used to make leis (floral garlands). 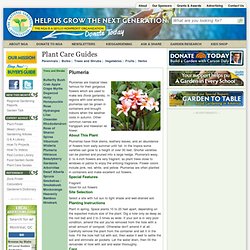 In regions with cold winters, plumerias can be grown in containers and brought indoors when the weather cools in autumn. Other common names are frangipani and Hawaiian lei flower. About This Plant Plumerias have thick stems, leathery leaves, and an abundance of flowers from early summer until fall. In the tropics some varieties can grow to a height of over 30 feet. Special Features Fragrant Good for cut flowers Site Selection Select a site with full sun to light shade and well-drained soil.