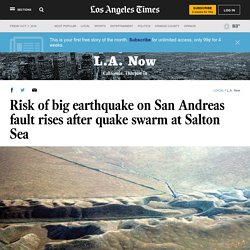 A rapid succession of small earthquakes — three measuring above magnitude 4.0 — began rupturing near Bombay Beach, continuing for more than 24 hours. Before the swarm started to fade, more than 200 earthquakes had been recorded. The temblors were not felt over a very large area, but they have garnered intense interest — and concern — among seismologists. It marked only the third time since earthquake sensors were installed there in 1932 that the area had seen such a swarm, and this one had more earthquakes than the events of 2001 and 2009. Update: Elevated risk for big San Andreas fault quake is dropping, scientists say » Related: Feeling earthquake anxiety? News - Chance of mega-quake increases during this natural event - The Weather Network. Busting the myths of earthquake survival. Renegade Filter. The Renegade Filter is the lightest and most versatile filtration system we offer. 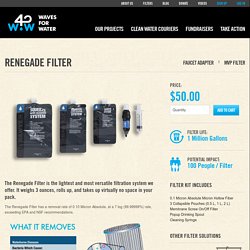 It weighs 3 ounces, rolls up, and takes up virtually no space in your pack. The Renegade Filter has a removal rate of 0.10 Micron Absolute, at a 7 log (99.99999%) rate, exceeding EPA and NSF recommendations. Highest Filtration Rates Available. In Case Of 2-person Deluxe 72 Hour Emergency Kit. The Public Safety Department of the Canadian Government strongly suggests that every Canadian household have quick access to their own complete 72 hour emergency kit. 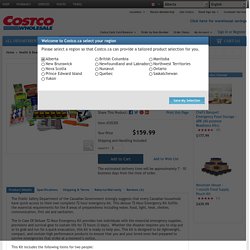 This deluxe 72 Hour Emergency Kit fulfills the essential requirements for the 8 areas of preparedness including water, food, light, heat, shelter, communication, first aid and sanitation. The In Case Of Deluxe 72 Hour Emergency Kit provides two individuals with the essential emergency supplies, provisions and survival gear to sustain life for 72 hours (3 days). Whether the disaster requires you to stay put or to grab and run for a quick evacuation, this kit is ready to help you. This kit is designed to be lightweight, compact, and contain high performance products to ensure that you and your loved ones feel prepared to survive emergencies that strike at a moment’s notice. Store Home - Red Cross Store. Safety Tube - Red Cross Store. Get a Disaster Preparedness Kit from the Canadian Red Cross. Download printable version The Red Cross recommends that you keep a disaster preparedness kit in your home with enough supplies to meet your family’s needs for at least 72 hours. 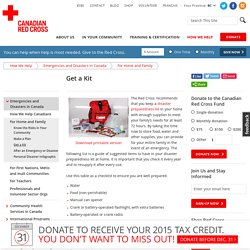 By taking the time now to store food, water and other supplies, you can provide for your entire family in the event of an emergency. Is your home earthquake-ready? How to prepare for the Big One. It has been so long since Los Angeles suffered a major earthquake -- the magnitude 6.7 Northridge quake was 20 years ago in January -- that it's been easy to put disaster preparedness on a back burner. 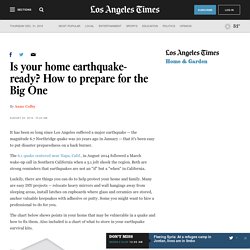 The 6.1 quake centered near Napa, Calif., in August 2014 followed a March wake-up call in Southern California when a 5.1 jolt shook the region. Both are strong reminders that earthquakes are not an "if" but a "when" in California. Luckily, there are things you can do to help protect your home and family. Many are easy DIY projects -- relocate heavy mirrors and wall hangings away from sleeping areas, install latches on cupboards where glass and ceramics are stored, anchor valuable keepsakes with adhesive or putty.

Falling TVs send a child to the ER every 30 minutes. Chris Stein / Getty Images stock Children under 5 are most at risk from TVs toppling over on them. 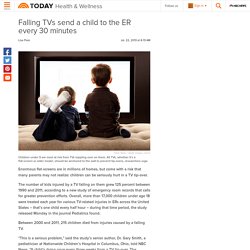 All TVs, whether it’s a flat-screen or older model, should be anchored to the wall to prevent tip-overs, researchers urge. Enormous flat-screens are in millions of homes, but come with a risk that many parents may not realize: children can be seriously hurt in a TV tip-over. The number of kids injured by a TV falling on them grew 125 percent between 1990 and 2011, according to a new study of emergency room records that calls for greater prevention efforts. Overall, more than 17,000 children under age 18 were treated each year for various TV-related injuries in ERs across the United States – that’s one child every half hour – during that time period, the study released Monday in the journal Pediatrics found.

Shakeoutgame. Can It Happen Here? What are Tsunamis? 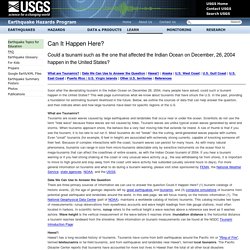 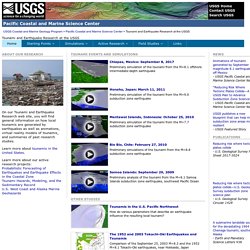 TsunamiZone.org - Are You in the Zone? Purifying Your Drinking Water - HealthLinkBC. Build an Emergency Kit - Province of British Columbia. Creating a home emergency kit doesn't need to take long. 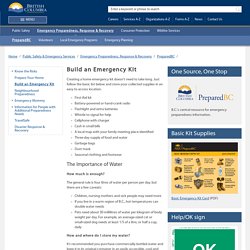 Just follow the basic list below and store your collected supplies in an easy to access location. First-Aid kit Battery-powered or hand-crank radio Flashlight and extra batteries Whistle to signal for help Cellphone with charger Cash in small bills A local map with your family meeting place identified Three-day supply of food and water Garbage bags Dust mask Seasonal clothing and footwear The Importance of Water How much is enough? The general rule is four litres of water per person per day, but there are a few caveats: Children, nursing mothers and sick people may need more If you live in a warm region of B.C., hot temperatures can double water needs Pets need about 30 millilitres of water per kilogram of body weight per day. 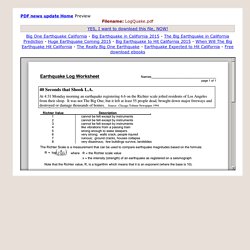 Preview of BAS-How-You-Can-Strengthen-Your-Home.pdf. The Big One Earthquake 2015. Annals of Seismology JULY 20, 2015 ISSUE The Really Big One An earthquake will destroy a sizable portion of the coastal Northwest. The question is when. {JULY 20, 2015 ISSUE The Really Big One}. Preview of cipr_events_150814_really_big_one.pdf. EmergencyInfoBC. Evacuation Stages Evacuation Order: You are at risk. Leave the area immediately. Local police or RCMP enforce evacuation orders. Evacuation Alert: Be ready to leave on short notice. Earthquakes. Earthquake apathy means B.C. is not prepared for the big one.