Sheryl's Blog » Blog Archive “Black Rust” and Cast Iron Seasoning. My previous post on the chemistry of cast iron seasoning focused on fat polymerization – the transformation of an oil into a hard, slick glaze. 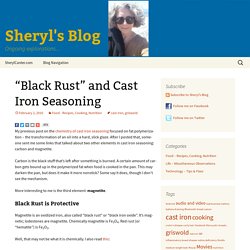 After I posted that, someone sent me some links that talked about two other elements in cast iron seasoning: carbon and magnetite. Carbon is the black stuff that’s left after something is burned. Non-Collectible Cast Iron Cookware - The Cast Iron Collector: Information for The Vintage Cookware Enthusiast. There is quite a bit of cast iron cookware that you may see presented as vintage in the collectibles marketplace that is, well, neither vintage nor collectible. 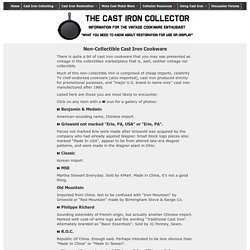 Much of this non-collectible iron is comprised of cheap imports, celebrity TV chef-endorsed cookware (also imported), cast iron produced strictly for promotional purposes, and "major U.S. brand in name only" cast iron manufactured after 1960. Listed here are those you are most likely to encounter. Cast Iron Cookware Finishing - The Cast Iron Collector: Information for The Vintage Cookware Enthusiast. Another reason vintage cast iron cookware is coveted by collectors and cooks alike-- in addition to the fineness and lightness of castings typically seen prior to the advent of factory automation-- is the extra effort manufacturers put into finishing their products. 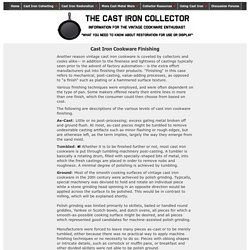 "Finishing" in this case refers to mechanical, post-casting, value-adding processes, as opposed to "a finish" such as plating or a hammered surface texture. Various finishing techniques were employed, and were often dependent on the type of pan. Some makers offered nearly their entire lines in more than one finish, which the consumer could then choose from based on cost. 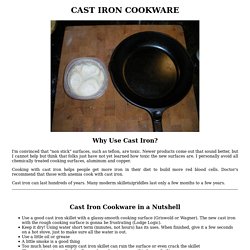 I'm convinced that "non stick" surfaces, such as teflon, are toxic. Newer products come out that sound better, but I cannot help but think that folks just have not yet learned how toxic the new surfaces are. I personally avoid all chemically treated cooking surfaces, aluminum and copper. Cooking with cast iron helps people get more iron in their diet to build more red blood cells. The Truth About Cast Iron Pans: 7 Myths That Need To Go Away. [Photographs: J. 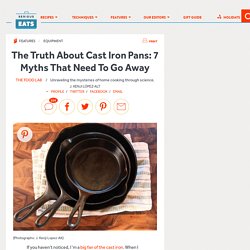 Kenji Lopez-Alt] If you haven't noticed, I 'm a big fan of the cast iron. When I packed up my apartment last spring and had to live for a full month with only two pans in my kitchen, you can bet your butt that the first one I grabbed was my trusty cast iron skillet. I use it for the crispest potato hash and for giving my steaks a crazy-good sear. Sheryl's Blog » Blog Archive Chemistry of Cast Iron Seasoning: A Science-Based How-To. The post after this one on “black rust” describes why you should heat the pan before applying oil for seasoning. 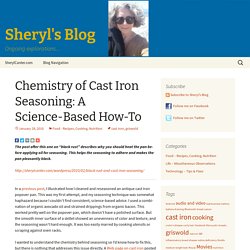 This helps the seasoning to adhere and makes the pan pleasantly black. In a previous post, I illustrated how I cleaned and reseasoned an antique cast iron popover pan. This was my first attempt, and my seasoning technique was somewhat haphazard because I couldn’t find consistent, science-based advice. I used a combination of organic avocado oil and strained drippings from organic bacon.