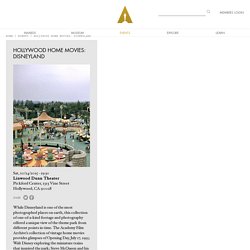 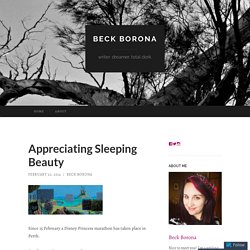 So of course I’ve gone mental. The first weekend was Beauty and the Beast which is one of my personal favourites and yesterday was Sleeping Beauty. Sleeping Beauty I haven’t seen since I was a kid so to see it as an adult was quite an experience. The Happiest Subreddit On Earth! DLR Annual Passholders - Welcome! PREVIEW: Take a glimpse behind the scenes of “Moana,” Walt Disney Animation Studios’ latest dazzling feature.

Walt Disney Animation Studios is having a stellar decade. 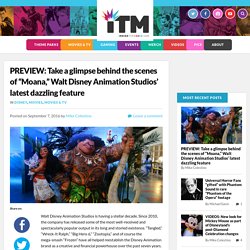 Since 2010, the company has released some of the most well-received and spectacularly popular output in its long and storied existence. “Tangled,” “Wreck-It Ralph,” “Big Hero 6,” “Zootopia,” and of course the mega-smash “Frozen” have all helped reestablish the Disney Animation brand as a creative and financial powerhouse over the past seven years.

Now, as the studio prepares to debut its next feature “Moana” this fall, fans and critics alike are eagerly waiting to see what Disney has cooked up for its second non-Pixar animated release of 2016. Earlier this summer I was fortunate enough to attend a behind-the-scenes preview of “Moana” at the Walt Disney Animation Studios’ Tujunga campus in North Hollywood. At the event, media were treated to glimpses of the film as a work-in-progress, and had the chance to listen in as members of the creative team discussed the process of bringing such an ambitious, epic movie to life. The Happiest Subreddit On Earth! Davelandblog: One Day Digression: West Baden Springs Hotel. I am doing a one-day non-Disneyland entry about one of my OTHER favorite places in the world: The West Baden Springs Hotel in West Baden, Indiana. 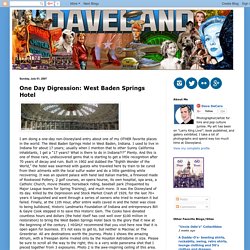 I used to live in Indiana for about 17 years; usually when I mention that to other Sunny California inhabitants, I get a “17 years? What is there to do in Indiana?!?” Plenty. And this is one of those rare, undiscovered gems that is starting to get a little recognition after 70 years of decay and ruin. Built in 1902 and dubbed the “Eighth Wonder of the World,” the hotel was swarmed with guests who traveled here by train to be cured from their ailments with the local sulfur water and do a little gambling while recovering. The Dapper Dans Web Site. Disney College Program Home. Walt Disney - WOW.com. 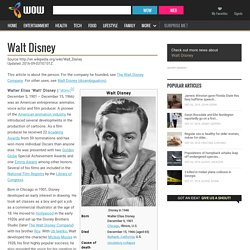 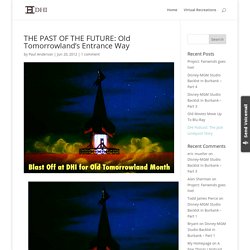 Anderson (Click on any picture for a high-resolution image) Welcome, welcome foolish mortals (sorry, wrong land)! Welcome to the summer of Old Tomorrowland here at the Institute! DHI readers are familiar with the oft told story of how Tomorrowland was the least developed land when Walt’s park opened in July of 1955, and how dissatisfied he was. Photos of Dapper Dans. DISNEYLAND TIMELINE. 1954 – Construction starts in Anaheim, which often continues 24 hours a day to get the park ready in time. 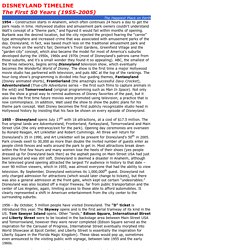 Hollywood studios and amusement park owners couldn’t understand Walt’s concept of a “theme park,” and figured it would fail within months of opening. Burbank was the desired location, but the city rejected the project fearing the “carnie” type atmosphere and increased crime that was associated with amusement parks of the day. Disneyland, in fact, was based much less on the traditional amusement park and much more on the world’s fair, Denmark’s Tivoli Gardens, Greenfield Village and the “garden city" concept, which also became the model for most of America’s suburbs developed during the 1950s, 1960s and 1970s (most of Disneyland's patrons came from those suburbs, and it's a small wonder they found it so appealing). 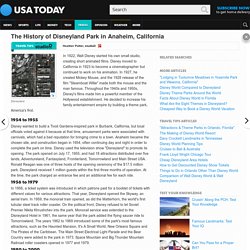 Disney moved to California in 1923 to become a cinematographer but continued to work on his animation. In 1927, he created Mickey Mouse, and the 1928 release of the film "Steamboat Willie" made both the mouse and the man famous. Throughout the 1940s and 1950s, Disney's films made him a powerful member of the Hollywood establishment. He decided to increase his family entertainment empire by building a theme park, America's first.

Sights and Sounds of Disney Parks: It’s a Classic Attraction. It’s Turning 50. ‘it’s a small world!’ To some of us, it seems like only yesterday that Walt Disney first opened one of his best-loved ride-through attractions on April 22, 1964. 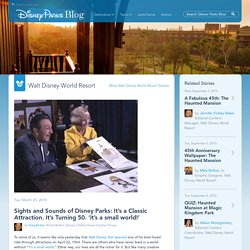 There are others who have never lived in a world without “it’s a small world.” Either way, our lives are all the richer for it. But like many creative miracles, it almost never came to be. WED Enterprises, as Walt Disney Imagineering was then known (the letters stood for “Walter Elias Disney”), was feverishly working toward a one-year deadline for three World’s Fair attractions: Progressland, Great Moments with Mr. The Dapper Dans Web Site.

CONCEPT ART: Disneyland Unveils Eastern Gateway, Non-Disney Hotels Now Farther From the Magic - WDW News TodayWDW News Today. A few days ago, we told you about the official announcement Disney was making for the Eastern Gateway project, a plan that will add a new parking structure, bus loop, and pedestrian entrance to the Disneyland Resort on the Harbor Blvd. side of the property. 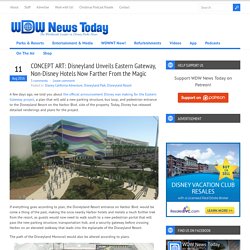 Today, Disney has released detailed renderings and plans for the project. If everything goes according to plan, the Disneyland Resort entrance on Harbor Blvd. would be come a thing of the past, making the once nearby Harbor hotels and motels a much further trek from the resort, as guests would now need to walk south to a new pedestrian portal that will pass the new parking structure, transportation hub, and a security gateway before crossing Harbor on an elevated walkway that leads into the esplanade of the Disneyland Resort. The path of the Disneyland Monorail would also be altered according to plans. SOURCE – OC Register. Video: Disney Resort to build new 7-story parking structure, elevated walkway ahead of 'Star Wars' land. ANAHEIM – Disney intends to construct a transportation hub, a massive parking structure and a pedestrian bridge over Harbor Boulevard connecting them with Disneyland and Disney California Adventure ahead of the opening of “Star Wars” land in its signature theme park.

According to documents filed Wednesday in City Hall, the company proposes to start building a seven-story, 6,800-space parking structure next year along Disney Way. The park also plans to shutter its current transportation hub, where buses from some Disney parking lots and hotel shuttles drop off visitors near the theme parks’ main gates to build the new one on a Disney-owned site about a half-mile away on Manchester Avenue. The Carousel Inn and Suites, which Disney purchased last year for $32 million, would close in October and eventually get razed to make way for a pedestrian walkway leading from the new transit hub to the bridge 20 feet above Harbor. The entire project is scheduled for completion in late 2018. Disneyland Plans Major Parking Shakeup With 7-Story Garage and Pedestrian Bridge. The amusement park is desperately trying to prepare for the arrival of Star Wars Land Getting to the happiest place on Earth typically requires a few unhappy moments, but Disneyland is finally trying out some new solutions.

The amusement park’s parent company recently got the green-light for a giant new transportation center at Clementine Street and Disney Way in Anaheim, which will centralize buses, shuttles, cabs, and Ubers, and cut down on car traffic around Harbor Boulevard, Ball Road, and Katella Avenue. Called the Eastern Gateway Project, the forthcoming transportation center will include a new seven-story, 6,800-space parking garage, which will offer direct access to the entrances of the Magic Kingdom and California Adventure via a 20-foot high pedestrian bridge over Harbor.

Exhibition announced featuring Disney animation master Eyvind Earle. Earle’s hallmark was nature in all forms. Especially landscapes We should all be so lucky to live our lives like the late Disney artist, Eyvind Earle. His work graces the homes of the biggest filmmakers and studio chiefs. People like Guillermo del Toro collect his work which is distinctive and arresting, realistic and yet oddly pop art at times.

This project on the east side of the Disneyland Resort will include a new parking structure with 6,800 spaces, a new transportation facility and an elevated pedestrian bridge. The largest infrastructure project in the Anaheim Resort Area in the last 20 years, the Eastern Gateway will make it even easier to get to the Happiest Place on Earth by providing an east-side entry point to the Anaheim Resort Area. For residents near Disneyland, nightly fireworks shows have lost their spark - latimes. For most people, fireworks are a special treat — loud, luminous displays to savor on Independence Day or New Year's Eve.

But for some who live near Disneyland, where fireworks blossom in the skies above Sleeping Beauty's Castle almost every night, the rockets' red glare has worn out its welcome. Residents have added double-paned windows and extra insulation to soundproof the walls.