Who Are Paplu, Nichlu & Tiplu in Indian Rummy? - Rummyculture Blog. Do these names sound like the characters from a Bollywood film? 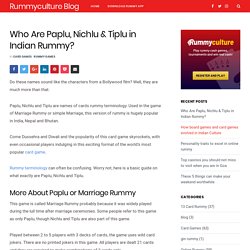 Well, they are much more than that. Paplu, Nichlu and Tiplu are names of cards rummy terminology. Used in the game of Marriage Rummy or simple Marriage, this version of rummy is hugely popular in India, Nepal and Bhutan. Come Dussehra and Diwali and the popularity of this card game skyrockets, with even occasional players indulging in this exciting format of the world’s most popular card game. Rummy terminology can often be confusing. More About Paplu or Marriage Rummy This game is called Marriage Rummy probably because it was widely played during the lull time after marriage ceremonies. Played between 2 to 5 players with 3 decks of cards, the game uses wild card jokers. Paplu, Nichlu and Tiplu After 21 cards have been dealt to each player, one card is pulled from the deck and named Tiplu. The card lower to Tiplu (of the same suit) is called Nichlu (or Jhiplu). The card higher to Tiplu (of the same suit) is called Paplu. Scoring. Rummy Game Mantra Or Top Winning Strategies That You Must Know.

Popular movies related to card games - Rummyculture Blog. Popular card games like rummy and poker have made frequent appearances in many Hollywood and Bollywood films. 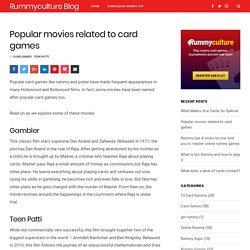 In fact, some movies have been named after popular card games too. Read on as we explore some of these movies. Gambler This classic film stars superstar Dev Anand and Zaheeda. Released in 1971, the plot has Dev Anand in the role of Raja. Teen Patti While not commercially very successful, this film brought together two of the biggest superstars in the world – Amitabh Bachchan and Ben Kingsley. Casino Considered by many to be the best card game based movie ever, this film was directed by the legendary Martin Scorsese and released in 1995. Inspired by the true story of the MIT Blackjack team as referenced in Ben Mezrich’s book Bring Down The House, this film is a heist drama released in 2008.

Rounders. How to Play Rummy 500 - Rummyculture Blog. Card games abound, and so do variations of each game. 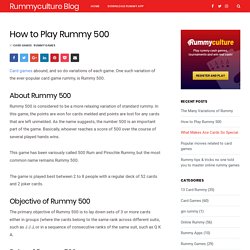 One such variation of the ever-popular card game rummy, is Rummy 500. About Rummy 500 Rummy 500 is considered to be a more relaxing variation of standard rummy. In this game, the points are won for cards melded and points are lost for any cards that are left unmelded. As the name suggests, the number 500 is an important part of the game. 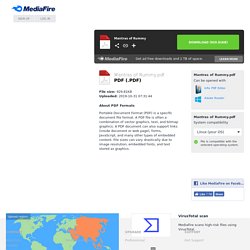 A PDF file is often a combination of vector graphics, text, and bitmap graphics. A PDF document can also support links (inside document or web page), forms, JavaScript, and many other types of embedded content. Upgrade to PRO for the best download experience. Bulk download folders Ad-free downloads Direct downloads Upgrade to Pro Like MediaFire on Facebook This file was uploaded from India on October 31, 2019 at 7:31 AM VirusTotal scan MediaFire scans high-risk files using VirusTotal. About MediaFire Welcome! 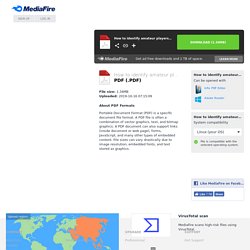 A PDF file is often a combination of vector graphics, text, and bitmap graphics. A PDF document can also support links (inside document or web page), forms, JavaScript, and many other types of embedded content. Upgrade to PRO for the best download experience. Bulk download folders Ad-free downloads Direct downloads Upgrade to Pro Like MediaFire on Facebook This file was uploaded from India on October 16, 2019 at 7:15 AM VirusTotal scan. Call of Duty Mobile apps and its record breaking numbers - Rummyculture Blog. If you are a lover of video games, you would have definitely heard about Call of Duty. 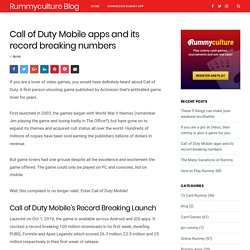 A first person shooting game published by Activision that’s enthralled game lover for years. First launched in 2003, the games began with World War II themes (remember Jim playing the game and losing badly in The Office?) , but have gone on to expand its themes and acquired cult status all over the world. Hundreds of millions of copies have been sold earning the publishers billions of dollars in revenue. But game lovers had one grouse despite all the excellence and excitement the game offered. Well, this complaint is no longer valid. Call of Duty Mobile’s Record Breaking Launch Launchd on Oct 1, 2019, the game is available across Android and iOS apps. How to download Call of Duty Mobile Weighing 2 GB, this game is going to occupy a lot of space and RAM so we recommend you download this only if you have enough space to spare and decent RAM size in your phone. If you are a pro at chess, then rummy is also a game for you - Rummyculture Blog.

To the uninitiated, the games of Chess and Rummy may look at two entirely different worlds. 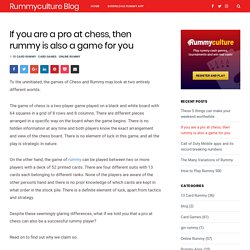 These 5 things can make your weekend worthwhile - Rummyculture Blog. Weekends are a great relief from the five day turmoil of the work week. 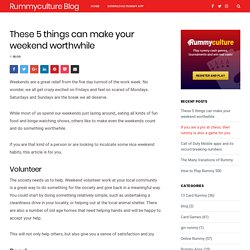 No wonder, we all get crazy excited on Fridays and feel so scared of Mondays. Saturdays and Sundays are the break we all deserve. While most of us spend our weekends just lazing around,, eating all kinds of fun food and binge watching shows, others like to make even the weekends count and do something worthwhile. If you are that kind of a person or are looking to inculcate some nice weekend habits, this article is for you. Volunteer The society needs us to help. This will not only help others, but also give you a sense of satisfaction and joy.