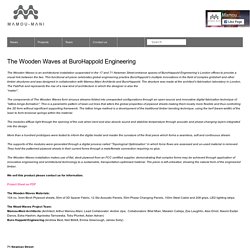 This functional art piece celebrates global engineering practice BuroHappold’s multiple innovations in the field of complex gridshell and other timber structures and was designed in collaboration with Mamou-Mani Architects and BuroHappold. The 20 Best Architecture Tumblrs. With its emphasis on all things visual, Tumblr has emerged as one of the most engaging platforms for observing architecture, ranging from the historic to the surreal. 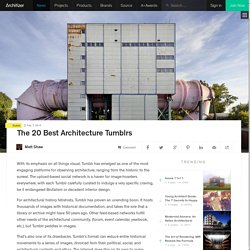 The upload-based social network is a haven for image-hoarders everywhere, with each Tumblr carefully curated to indulge a very specific craving, be it endangered Brutalism or decadent interior design. For architectural history fetishists, Tumblr has proven an unending boon. It hosts thousands of images with historical documentation, and takes the role that a library or archive might have 50 years ago. Other feed-based networks fulfill other needs of the architectural community, (forum, event calendar, yearbook, etc.), but Tumblr peddles in images.

That's also one of its drawbacks. Still, this quality does give Tumblr so much of its cultural potential. While it is possible to simply search #architecture and find great collections and pictures, we have compiled a list of our favorite Tumblrs for your browsing enjoyment. 20 Creative Business Cards for Architects. Open Source Building System. Wood, Fabrication, Walls, Engineered Wood, Engineering, Lumber, Structure, Simon Neulichedl, Sandy Attia, BauCon, Finnforest, Metsä Wood, Autodesk, If ever a client exists that would want to flaunt the versatility of wood, it is Damiani-Holz & Ko (DH&K), a timber construction company in the light-industrial district of Bressanone, Italy. 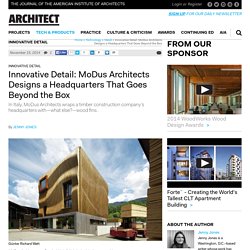 DH&K wanted a building that “represented what they do in an innovative way and that just stood out and said, ‘Wood,’ ” says Sandy Attia, founding partner of local firm MoDus Architects. Housing a customer service area, office space, and a multipurpose room, the four-story, 12,885-square-foot building features wood framing, floors, ceilings, and stairs. But its most prominent element is its exterior, which comprises 424 geometric plywood fins that wrap the structure’s walls and roof and mimic the towering pallets of boards and planks in DH&K’s lumberyard. “These big, very monolithic blocks—almost like mini buildings of wood—were our inspiration,” Attia says. The fins also form a brise-soleil over most of the building’s windows. The headquarters has elevated DH&K’s marketing efforts. 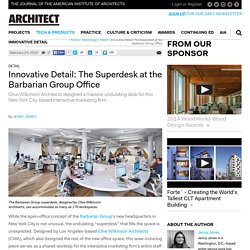 Designed by Los Angeles-based Clive Wilkinson Architects (CWA), which also designed the rest of the new office space, this wow-inducing piece serves as a shared worktop for the interactive marketing firm’s entire staff and a physical representation of the firm’s collaborative approach to its work. The 4,400-square-foot desk weaves through the 20,000-square-foot office, and while the path seems whimsical, each curve and arch was deliberately designed. “These grottoes that are created when the table lifts up are a direct reaction to the lines of circulation that need to happen through the space,” says Chester Nielsen, associate at of CWA. CWA used the 3D-modeling software Rhinoceros and Revit to achieve the desk’s geometry.

The desk measures 1,100 feet long and 11-1/2 feet across at its widest point. Premium Prefab Homes. 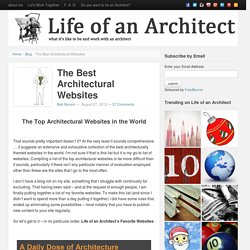 At the very least it sounds comprehensive … it suggests an extensive and exhaustive collection of the best architecturally themed websites in the world. I’m not sure if that is this list but it is my go-to list of websites. Compiling a list of the top architectural websites is far more difficult than it sounds, particularly if there isn’t any particular manner of evaluation employed other than these are the sites that I go to the most often. I don’t have a blog roll on my site, something that I struggle with continually for excluding. So let’s get to it – in no particular order, Life of an Architect’s Favorite Websites: John Hill’s A Daily Dose of Architecture was the first architectural bog that I started reading. I discovered the BUILD website a few months after starting my own. What is there to say about the ArchDaily website? Architechnophilia is an aggregate site and a really good one at that.