Mass surveillance makes us subjects of the state. That's chilling. In the 1980s there existed in Sydney something called the Free Speech Committee. 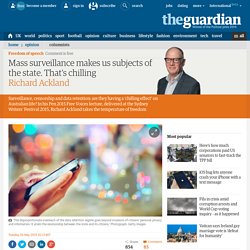 It was mainly comprised of hairy lefties who believed free speech should be absolute – even broader than the first amendment. Soon strange old men with sweep-over hair dos began to appear at meetings of the FSC with leaflets about the virtues of “boy love”. The sweep-overs wanted to distribute them outside schools. The police had moved them on, saying this was inappropriate material.

Don’t trust your phone, don’t trust your laptop – this is the reality that Snowden has shown us. Back in July 2013, a few weeks after Edward Snowden’s revelations about internet and mobile-phone surveillance began, I wrote a column that began: “Repeat after me: Edward Snowden is not the story. 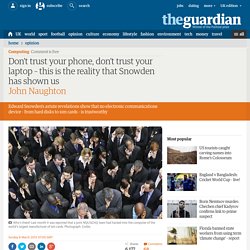 The story is what he has revealed about the hidden wiring of our networked world.” The spur for the column was my realisation of the extent and astuteness of Snowden’s choice of what to collect and reveal. His was not some opportunistic smash-and-grab data heist, but a considered, informed selection of cases where he thought that the National Security Agency was violating the US constitution and/or circumventing its laws. Snowden was clearly no stereotypical left-wing dissident; he seemed closer to what US constitutional lawyers called an “originalist” – someone who regards the constitution as a sacred, inviolable document that citizens – and their governments – must continue to respect and adhere to. Petraeus won't serve a day in jail for his leaks. Edward Snowden shouldn't either. The sweetheart deal the Justice Department gave to former CIA director David Petraeus for leaking top secret information compared to the stiff jail sentences other low-level leakers have received under the Obama administration has led to renewed calls for leniency for NSA whistleblower Edward Snowden. 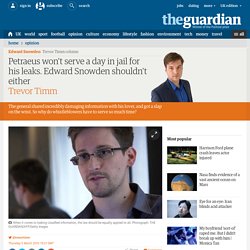 Here's Proof That Thousands of Wiretaps Are Secretly Conducted by Canadian Cops. But according to documents obtained exclusively by Motherboard, we now know this: at least 6,000 wiretaps and intercepts were authorized per year across all levels of government in Canada as of 2011. 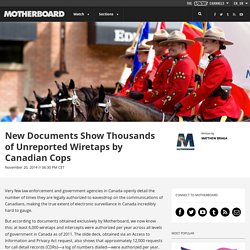 The slide deck, obtained via an Access to Information and Privacy Act request, also shows that approximately 12,000 requests for call detail records (CDRs)—a log of numbers dialled—were authorized per year. It is not clear whether those averages remain consistent today, but it is possible they may be even higher now given the increasing reliance on electronic surveillance in law enforcement investigations. What we already do know is that government and law enforcement agencies regularly make warrantless requests for subscriber information from telecommunications companies. For example, the Canadian Border Services Agency made 18,849 requests between 2012 and 2013, where only 52 of those requests required a warrant.

When data gets creepy: the secrets we don’t realise we’re giving away. It’s easy to be worried about people simply spying on your confidential data. iCloud and Google+ have your intimate photos; Transport for London knows where your travelcard has been; Yahoo holds every email you’ve ever written. 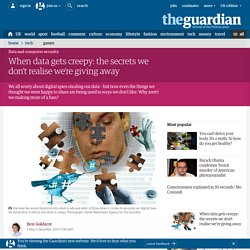 We trust these people to respect our privacy, and to be secure. Often they fail: celebrity photos are stolen; emails are shared with spies; the confessional app Whisper is caught tracking the location of users. The Digital Hunt for Duqu, a Dangerous and Cunning U.S.-Israeli Spy Virus. Boldizsár Bencsáth took a bite from his sandwich and stared at his computer screen. 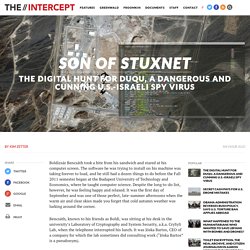 The software he was trying to install on his machine was taking forever to load, and he still had a dozen things to do before the Fall 2011 semester began at the Budapest University of Technology and Economics, where he taught computer science. Glenn Greenwald on balancing security and liberty. Journalist Glenn Greenwald is in Ottawa next week to reflect on his Pulitzer Prize-winning reporting of the Snowden leaks. 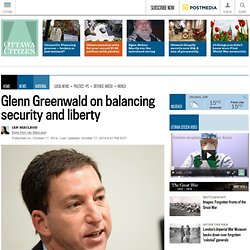 Edward Snowden’s stunning revelations last year about bulk electronic spying on millions of Americans and foreigners by his former employer, the U.S. National Security Agency (NSA), left Greenwald with some powerful perspectives and opinions on state surveillance, privacy and government secrecy. His views extend to the Communications Security Establishment Canada and its ultrasecret work for global surveillance operations run by the NSA and “Five Eyes” western security intelligence alliance. Snowden: New Zealand's Prime Minister Isn't Telling the Truth About Mass Surveillance. Like many nations around the world, New Zealand over the last year has engaged in a serious and intense debate about government surveillance. 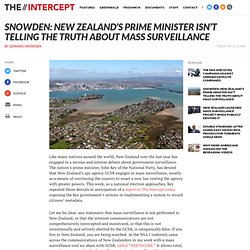 The nation’s prime minister, John Key of the National Party, has denied that New Zealand’s spy agency GCSB engages in mass surveillance, mostly as a means of convincing the country to enact a new law vesting the agency with greater powers. This week, as a national election approaches, Key repeated those denials in anticipation of a report in The Intercept today exposing the Key government’s actions in implementing a system to record citizens’ metadata. Let me be clear: any statement that mass surveillance is not performed in New Zealand, or that the internet communications are not comprehensively intercepted and monitored, or that this is not intentionally and actively abetted by the GCSB, is categorically false.