Beware Online Loan Scammers. Dear ABC News Fixer: I tried for a loan online and was stupid enough to send more than $3,000. 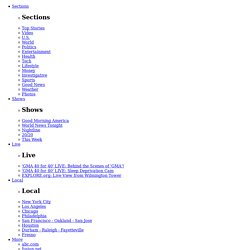 They said it was for various things like processing fees, or because I had bad credit, or for insurance on the loan. They keep giving me the runaround. This all started back in March and we are still trying to recover from it. - Wendolyn M., Kilgore, Texas Got a consumer problem? Dear Wendolyn: Unfortunately – as you now know -- this wasn’t a loan at all. You told the ABC News Fixer that you want to get to the word out to others so they don’t fall for it, too: “I’d hate for someone else to go through this,” you told us. Here’s how the scam went down: First, the “loan company” piggybacked off the name of an actual payday loan company that issues short-term loans. The people who scammed you were not part of any actual loan company. From the beginning, there were red flags all around. You were promised a $15,000 loan. And of course, no loan money ever came. Australias leading short term finance provider. 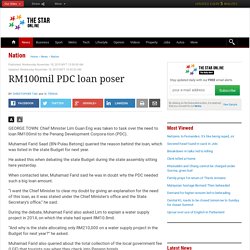 Muhamad Farid Saad (BN-Pulau Betong) queried the reason behind the loan, which was listed in the state Budget for next year. He asked this when debating the state Budget during the state assembly sitting here yesterday. When contacted later, Muhamad Farid said he was in doubt why the PDC needed such a big loan amount. “I want the Chief Minister to clear my doubt by giving an explanation for the need of this loan, as it was stated under the Chief Minister’s office and the State Secretary’s office,” he said. During the debate, Muhamad Farid also asked Lim to explain a water supply project in 2014, on which the state had spent RM10.8mil. “And why is the state allocating only RM210,000 on a water supply project in the Budget for next year?” “I was told that a total of RM10.6mil was collected, with only RM35,000 spent. Cardiff City star Ben Turner set to join Coventry City on loan - Reports. Cardiff City defender Ben Turner is due to be shipped out on loan to Coventry City, according to reports. 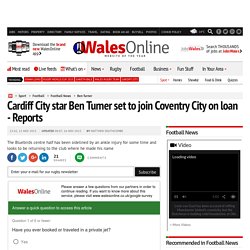 The Coventry Telegraph say that Sky Blues boss Tony Mowbray has held talks with Russell Slade, who is happy to let Turner go out on loan to regain his fitness. Turner has missed the start of the season after having ankle reconstruction and Mowbray has been monitoring his return to the pitch, travelling to watch the centre back in action for the Bluebirds under-21s. Coventry sold the 27-year-old to Cardiff in 2011, and he is set for a return to the Midlands this week in a bid to be ready to play this weekend. Last month, Mowbray lost centre-back Reda Johnson for the rest of the season to a hamstring injury and it is believed that Turner is being eyed up as his replacement. Loan shark faces jail after admitting deceiving family and friends. A loan shark is facing jail after admitting a string of offences at Cardiff Crown Court . 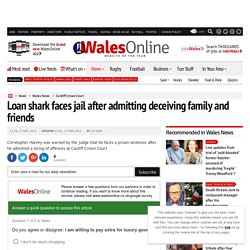 Christopher Harvey, 53, of Heol Rees, Hengoed, Caerphilly , was operating over a 10 year period. He originally denied doing anything wrong but changed his pleas as a jury was about to begin hearing evidence against him on Tuesday afternoon. His victims included family and friends, said prosecutor Timothy Evans. 'This will lead to a prison sentence' Following a further conference with his client, after 12 jurors had been sworn, defence barrister David Pinnell asked that the charges Harvey had originally denied, be put to him again. The shark who preyed on vulnerable victims then entered guilty pleas to being an unauthorised money lender between 2004 and 2014. He also pleaded guilty to three charges of theft and four of fraud. Judge Michael Fitton QC granted Harvey bail while pre sentence reports are prepared on him but warned “ This will lead to a prison sentence.”