Forbes Welcome. Detroit Police Cast Wide Net Over Homicide 'Witnesses' DETROIT— The law is clear here in Michigan and throughout the country: the police can arrest someone only if they have probable cause to believe that the person committed a crime. 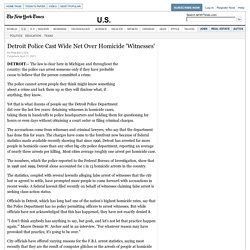 The police cannot arrest people they think might know something about a crime and lock them up so they will disclose what, if anything, they know. Yet that is what dozens of people say the Detroit Police Department did over the last few years: detaining witnesses in homicide cases, taking them in handcuffs to police headquarters and holding them for questioning for hours or even days without obtaining a court order or filing criminal charges. The accusations come from witnesses and criminal lawyers, who say that the department has done this for years. Detroit led U.S. in murder, crime rates, FBI says. Detroit — Crime fell in Detroit last year, but not enough to prevent it from being the most dangerous big city in the nation, according to FBI crime statistics released Monday. 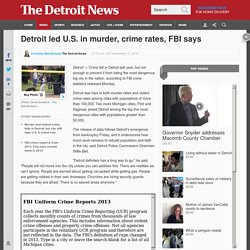 Detroit was tops in both murder rates and violent crime rates among cities with populations of more than 100,000. Two more Michigan cities, Flint and Saginaw, joined Detroit among the top five most dangerous cities with populations greater than 50,000. The release of data follows Detroit's emergence from bankruptcy Friday, and it underscores how much work remains to rebuild population and faith in the city, said Detroit Police Commission Chairman Willie Bell. "Detroit definitely has a long way to go," he said.

"People will not move into the city unless you can address this. Police Chief James Craig stressed that murder, carjackings and robberies are trending down in 2014. "This just didn't happen overnight," said Craig, who became chief in July 2013. Forbes Welcome. Detroit is going dark - Jul. 19, 2013. And if you're walking around the city, it might make sense to bring a flashlight -- about 40% of the 88,000 street lights don't work. 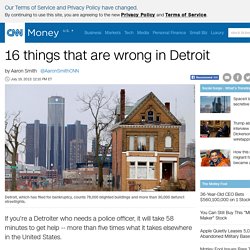 Those are two of the problems highlighted by Michigan Gov. Rick Snyder as he approved a bankruptcy filing for the state's biggest city. The problems have fed on themselves, resulting in 78.000 buildings either abandoned or ruined. "Does anybody think it's OK to have 40-year-old trees growing through the roofs of dilapidated houses? " asked emergency manager Kevyn Orr, in a news conference on Friday. Orr said the city had filed for bankruptcy because it would take more than 50 years to pay off the city's $11.5 billion in unsecured debt while not conducting even the most basic maintenance, such as filling potholes and plowing snow. Related: Detroit bankruptcy filing came with only 5 minutes to spare Here are some of the other problems outlined in the bankruptcy filing: -- 70 Superfund hazardous waste sites -- Fire stations are "old and not adequately maintained"

The cuts, announced this week, will take effect in September. Bill Nowling, spokesman for Kevyn Orr, the emergency manager overseeing the city's reorganization effort, said other city employees took the same 10% cut in 2012. The cuts for these officers was delayed because of union contracts that were in effect. "We had to make this cut due to disparity between management and rank and file," said Nowling. He said the city will save $4.5 million from these latest cuts. "These pay cuts and the savings have already been baked into the budget. Related: New hockey arena still a go in Detroit Nowling said if the city is able to get the debt relief it is seeking in bankruptcy, it is possible that some of the pay cuts can be restored at the end of the year. "It's not a promise, but it's one of the things we're looking at doing," he said. Forbes Welcome. Did One Man's Greed Drive Detroit Into Bankruptcy? Disclaimer: I have never lived in Detroit. 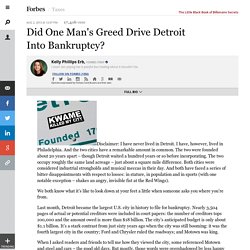 I have, however, lived in Philadelphia. And the two cities have a remarkable amount in common. The two were founded about 20 years apart – though Detroit waited a hundred years or so before incorporating. The two occupy roughly the same land acreage – just about a square mile difference. Both cities were considered industrial strongholds and musical meccas in their day. We both know what it’s like to look down at your feet a little when someone asks you where you’re from. Last month, Detroit became the largest U.S. city in history to file for bankruptcy. When I asked readers and friends to tell me how they viewed the city, some referenced Motown and steel and cars – the good old days.

So, I wondered, how did Detroit get here exactly? And yes, there was a gas crisis. At the turn of the new century, it appeared that Detroit might be headed towards renewal.