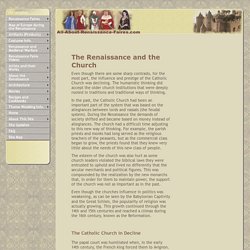 The humanistic thinking did accept the older church institutions that were deeply rooted in traditions and traditional ways of thinking. Www.mapsofwar.com/images/EMPIRE17.swf. Renaissance Art - Facts & Summary. MrsBotelho - Unit 4- Renaissance & Reformation. CSI: Italian Renaissance. City-States of the Italian Renaissance. During the Middle Ages, much of Italy was controlled by the Holy Roman Empire. 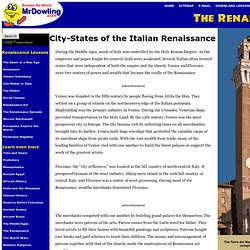 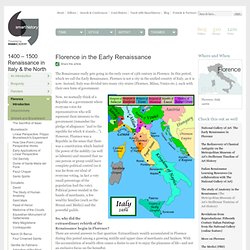 In this period, which we call the Early Renaissance, Florence is not a city in the unified country of Italy, as it is now. Instead, Italy was divided into many city-states (Florence, Milan, Venice etc.), each with their own form of government. Now, we normally think of a Republic as a government where everyone votes for representatives who will represent their interests to the government (remember the pledge of allegiance: "and to the republic for which it stands... "). However, Florence was a Republic in the sense that there was a constitution which limited the power of the nobility (as well as laborers) and ensured that no one person or group could have complete political control (so it was far from our ideal of everyone voting, in fact a very small percentage of the population had the vote). The Italian Renaissance and Italy's Transformation Video - Lesson and Example. Out of the Middle Ages. In the feudal structure of the Middle Ages, the nobles who lived in the country provided the king with protection in exchange for land. 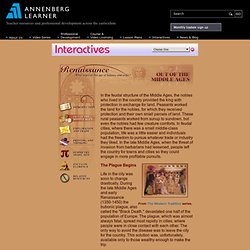 Peasants worked the land for the nobles, for which they received protection and their own small parcels of land. These rural peasants worked from sunup to sundown, but even the nobles had few creature comforts. In feudal cities, where there was a small middle-class population, life was a little easier and individuals had the freedom to pursue whatever trade or industry they liked. In the late Middle Ages, when the threat of invasion from barbarians had lessened, people left the country for towns and cities so they could engage in more profitable pursuits. Exploration and Trade. You are the owner of a large sailing ship. 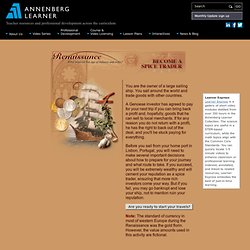 You sail around the world and trade goods with other countries. A Genoese investor has agreed to pay for your next trip if you can bring back a profit and, hopefully, goods that he can sell to local merchants. If for any reason you do not return with a profit, he has the right to back out of the deal, and you'll be stuck paying for everything. Before you sail from your home port in Lisbon, Portugal, you will need to make several important decisions about how to prepare for your journey and what route to take.

If you succeed, you will be extremely wealthy and will cement your reputation as a spice trader, ensuring that more rich investors come your way. Greece. The Renaissance Art Period - About.com Art History. We all know what the Renaissance was, correct? 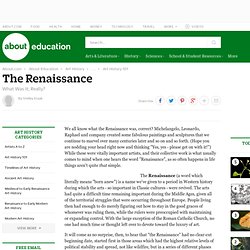 Michelangelo, Leonardo, Raphael and company created some fabulous paintings and sculptures that we continue to marvel over many centuries later and so on and so forth. (Hope you are nodding your head right now and thinking "Yes, yes - please get on with it! ") While these were vitally important artists, and their collective work is what usually comes to mind when one hears the word "Renaissance", as so often happens in life things aren't quite that simple. The Renaissance (a word which literally means "born anew") is a name we've given to a period in Western history during which the arts - so important in Classic cultures - were revived. The arts had quite a difficult time remaining important during the Middle Ages, given all of the territorial struggles that were occurring throughout Europe. The Renaissance: Was it a Thing? - Crash Course World History #22. Renaissance for Kids: Timeline. 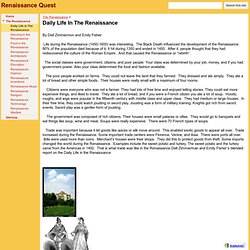 The Black Death influenced the development of the Renaissance. 80% of the population died because of it. It hit during 1350 and ended in 1450. After it, people thought that they had rediscovered the culture of the Roman Empire. Renaissance, The Elizabethan World - Life in Tudor England. Odyssey Online: Greece.