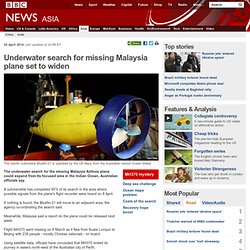 A submersible has completed 95% of its search in the area where possible signals from the plane's flight recorder were heard on 8 April. If nothing is found, the Bluefin-21 will move to an adjacent area, the agency co-ordinating the search said. Meanwhile, Malaysia said a report on the plane could be released next week. Flight MH370 went missing on 8 March as it flew from Kuala Lumpur to Beijing with 239 people - mostly Chinese nationals - on board. Using satellite data, officials have concluded that MH370 ended its journey in waters north-west of the Australian city of Perth.

Missing Malaysia Airlines jet: spotters endure 'incredibly fatiguing work' as they hunt for plane. MH370 search crews left frustrated While air force crews were disappointed search efforts were suspended for the Malaysia Airlines flight on Thursday due to poor weather, crew members on board the Australian P3 Orion remained hopeful about locating plane wreckage. 28, 2014 Over the southern Indian Ocean: They stare out at a punishingly unbroken expanse of grey water that seems, at times, to blend into the clouds. 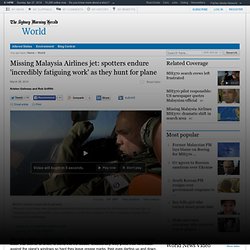 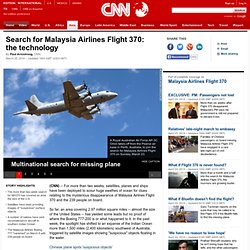 Crew aboard an Australian P-3 Orion "sub hunter" scan the southern Indian Ocean as they search for the missing plane on March 23. A U.S. airman monitors his instruments aboard a P-8 Poseidon during a mission in the southern Indian Ocean on March 23. Two giant Chinese Air Force Ilyushin Il-76 aircraft sit on the tarmac at Pearce air base on Saturday, March 22. Flight Lt. Jason Nichols, on board a Royal Australian Air Force AP-3C Orion, looks towards HMAS Success as they search for signs of the missing plane on March 22. The Norwegian merchant ship Hoegh St Petersburg, which was diverted to take part in the search, is seen from a Royal Australian Air Force P-3 Orion on Friday, March 21. UK firm behind Malaysia Airlines flight MH370 breakthrough. 24 March 2014Last updated at 14:49 ET Malaysia Airlines has told the families of the 239 people on board The revelation that flight MH370 ended in the southern Indian Ocean is based on new analysis by UK investigators and the British satellite firm Inmarsat, Malaysia's prime minister has said. 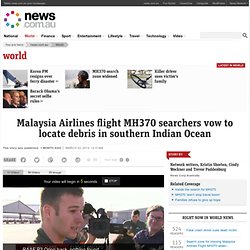 Courtesy: Sky News To access our premium content,please subscribe or log in. It's quick and easy. Your video will begin in 5 seconds Retired US Air Force Lt. Pilot Spoke to Air Controllers After Shutoff of Data System. Photo SEPANG, Malaysia — A signaling system was disabled on the missing Malaysia Airlines jet before a pilot spoke to air traffic control without mentioning any trouble, a senior Malaysian official said Sunday, reinforcing theories that one or both of the pilots may have been involved in diverting the plane and adding urgency to the investigation of their pasts and possible motivations. 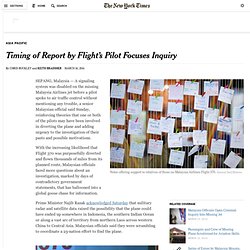 With the increasing likelihood that Flight 370 was purposefully diverted and flown thousands of miles from its planned route, Malaysian officials faced more questions about an investigation, marked by days of contradictory government statements, that has ballooned into a global goose chase for information. Prime Minister Najib Razak acknowledged Saturday that military radar and satellite data raised the possibility that the plane could have ended up somewhere in Indonesia, the southern Indian Ocean or along a vast arc of territory from northern Laos across western China to Central Asia.

Malaysia Officials Open Criminal Inquiry Into Missing Jet. Photo. Series of Errors by Malaysia Mounts, Complicating the Task of Finding Flight 370. SEPANG, Malaysia — The radar blip that was Malaysia Airlines Flight 370 did a wide U-turn over the Gulf of Thailand and then began moving inexorably past at least three military radar arrays as it traversed northern , even flying high over one of the country’s biggest cities before heading out over the Strait of Malacca. 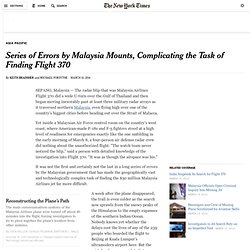 Yet inside a Malaysian Air Force control room on the country’s west coast, where American-made F-18s and F-5 fighters stood at a high level of readiness for emergencies exactly like the one unfolding in the early morning of March 8, a four-person air defense radar crew did nothing about the unauthorized flight. “The watch team never noticed the blip,” said a person with detailed knowledge of the investigation into Flight 370. “It was as though the airspace was his.” Continue reading the main story Secondary Radar and Text Updates. Radar Suggests Jet Shifted Path More Than Once. Photo SEPANG, Malaysia — Malaysia Airlines Flight 370 experienced significant changes in altitude after it lost contact with ground control, and altered its course more than once as if still under the command of a pilot, American officials and others familiar with the investigation said Friday. 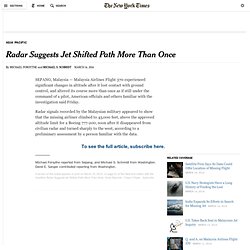 Radar signals recorded by the Malaysian military appeared to show that the missing airliner climbed to 45,000 feet, above the approved altitude limit for a Boeing 777-200, soon after it disappeared from civilian radar and turned sharply to the west, according to a preliminary assessment by a person familiar with the data. The radar track, which the Malaysian government has not released but says it has provided to the United States and China, showed that the plane then descended unevenly to 23,000 feet, below normal cruising levels, as it approached the densely populated island of Penang.

Malaysian Prime Minister Says Missing Jet Was Deliberately Diverted. Photo KUALA LUMPUR, Malaysia — The search for Flight 370 turned into a criminal investigation on Saturday, after Malaysia declared that the plane had been deliberately diverted and then flown for as long as seven hours toward an unknown point far from its scheduled route of Kuala Lumpur to Beijing. 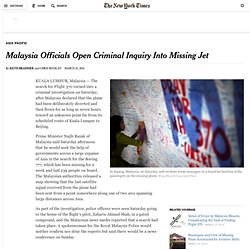 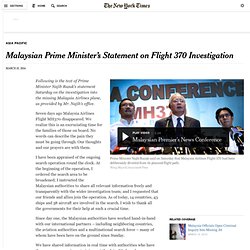 Najib’s office. Why It's Taking So Long to Find Missing Malaysia Airlines Plane. As the search for the missing jetliner extends into the vast seas on both sides of the Malay Peninsula, the world is wondering: How can eight countries, using more than 24 vessels and 9 aircraft over four days, fail to locate debris from a jumbo jet in shallow waters? 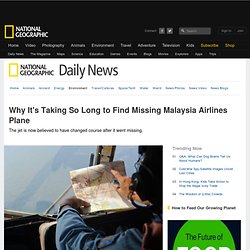 It seems now like the searchers have been looking in the wrong place. Military officials in Malaysia disclosed Tuesday that military radar tracked the missing Boeing 777 hundreds of miles west of its flight path—more than an hour after the jet disappeared from civilian air traffic control radar, Reuters reported. Search for Malaysia Airlines plane turns to crowdsourcing for clues. While Major General Datuk Affendi Buang briefs the media on the search using traditional mapping tools, a US-based satellite imaging company has launched its own search using crowdsourcing technology. As dozens of ships and aircraft from 10 nations scour the seas for the missing Malaysia Airlines jet, a US-based satellite imaging company has launched its own search effort with a crowdsourcing campaign to locate the Boeing 777. DigitalGlobe, which operates commercial imaging satellites, has made available high-resolution images from the weekend of the area where evidence suggests plane with 239 people on board may have crashed into the water.

A screenshot from the Tomnod website showing users what certain aircraft wreckage may look like. It is asking volunteers to log onto its Tomnod website and comb through images in the hope of locating something of interest. Advertisement So far, 3,200 square kilometres of imagery has been made available for volunteers to search online. Malaysia Airlines Flight 370: Missing plane defies search technology. BEIJING — Despite a wealth of technology, crews trying to find the missing Malaysia Airlines jetliner must cover a large swath of the South China Sea that varies widely in depth and is subject to fast-moving currents that could carry debris more than 50 miles a day, experts say.

The search for the missing Boeing 777 off the southern coast of Vietnam had yielded nothing by early Tuesday. Malaysian and Vietnamese authorities said they had yet to find anything linked to the airliner that carried 239 passengers and crew, and that the search area was being expanded and the operation "intensified. " Experts said wreckage could be sitting in water as shallow as 300 feet or as deep as 3,000 feet or more, where the ocean is pitch-black and the temperature is as low as 40 degrees. GPS signals are not effective in salt water and acoustic signals sent from the plane's emergency beacon could be faint.

"A search is like a symphony," he said. R. Search for MH370 B777: Leads Compounds the Mystery. Photo SEPANG, Malaysia — More than 48 hours after Malaysia Airlines Flight MH370 vanished, the mysteries over its fate have only multiplied. The Beijing-bound plane made no distress call, officials said, and the Malaysian authorities suggested it might have even begun to turn back to Kuala Lumpur midflight before it disappeared. Search for MH370 B777: On board a RSAF C-130 SAR Aircraft. Straits Times photojournalist Desmond Lim travelled with an RSAF C-130 aircraft helping in the search for Malaysia Airlines flight MH370, which went missing over the South China Sea on March 8. He discovered that a search-and-rescue operation over the open seas is a challenging mission which requires intense concentration but which doesn't always yield results.

Here is a first-person account of his journey. “How difficult could it be to spot something in the sea?” I asked myself as I sat on the red nylon webbed seat in a Republic of Singapore Air Force’s (RSAF) C-130, buckling up as the plane prepared to take off from Paya Lebar Air Base.