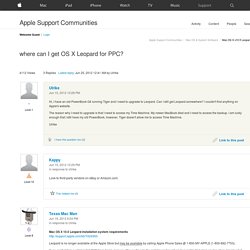 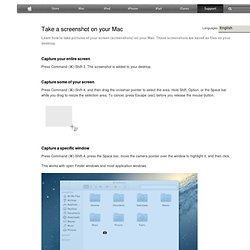 This works with open Finder windows and most application windows. To cancel, press Escape (esc) before you click. Capture a menu Click the menu to reveal its contents, then press Command (⌘)-Shift-4 and drag the crosshair pointer over the area. Thunderbolt to eSATA + USB 3.0 Adapter - Kanex. Multi-Sync Bluetooth Keyboard - Kanex. Memory Monitor - Speed up your system with a simple click. Display - Can Mac Mini Support 4k Monitor. DPI Calculator / PPI Calculator. Troubleshoot the spinning beach ball. 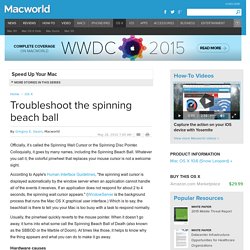 Colloquially, it goes by many names, including the Spinning Beach Ball. Whatever you call it, the colorful pinwheel that replaces your mouse cursor is not a welcome sight. According to Apple's Human Interface Guidelines, "the spinning wait cursor is displayed automatically by the window server when an application cannot handle all of the events it receives. If an application does not respond for about 2 to 4 seconds, the spinning wait cursor appears. " (WindowServer is the background process that runs the Mac OS X graphical user interface.) Usually, the pinwheel quickly reverts to the mouse pointer. Hardware causes The most basic reason the beach ball appears is because your Mac's hardware can’t handle the software task at hand.

To find out if the CPU is a bottleneck on performance, use Activity Monitor (/Applications/Utilities) to monitor CPU usage. What is free, wired, active, and inactive system memory (RAM)? Posted by Ant on February 17th, 2010 | 7 Comments Mac users: Have you ever wondered what all that system memory stuff in the Activity Monitor was all about? 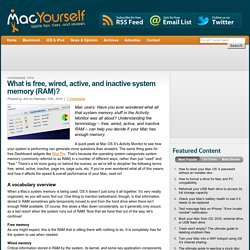 Understanding the terminology – free, wired, active, and inactive RAM – can help you decide if your Mac has enough memory. A quick peek at Mac OS X’s Activity Monitor to see how your system is performing can generate more questions than answers. Mac Mini Mid 2010 Hard Drive Replacement. Massachusetts, The people of Massachusetts have always stood up for their right to repair. 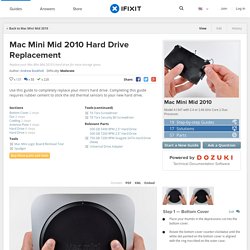 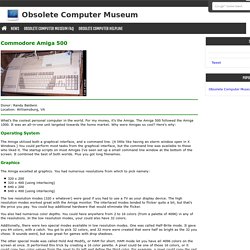 For my money, it's the Amiga. The Amiga 500 followed the Amiga 1000. Forecast Bar - Weather Powered by Forecast.io. Web Form Builder. Pixelmator. Microsoft Launches Office 2016 for Mac Preview, Available for Free to Mac Users. Microsoft is today introducing a preview of the next iteration of its office software designed for Mac users, Office 2016. 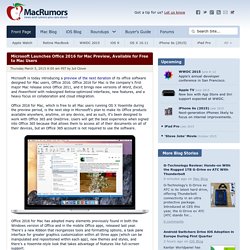 Office 2016 for Mac is the company's first major Mac release since Office 2011, and it brings new versions of Word, Excel, and PowerPoint with redesigned Retina-optimized interfaces, new features, and a heavy focus on collaboration and cloud integration. Office 2016 for Mac, which is free to all Mac users running OS X Yosemite during the preview period, is the next step in Microsoft's plan to make its Office products available anywhere, anytime, on any device, and as such, it's been designed to work with Office 365 and OneDrive.

Users will get the best experience when signed into Office 365 because that allows them to access all of their documents on all of their devices, but an Office 365 account is not required to use the software. Office 2016 for Mac is powered by the cloud so you can access your documents anytime, anywhere, and on any device. Hardware - What machines will OS X 10.10 (Yosemite) run on? Access. Parallels Desktop 9 For Mac.

The Road Ahead. Both of my parents were teachers, and for as long as I can remember they both encouraged me to do something in life that would help others. 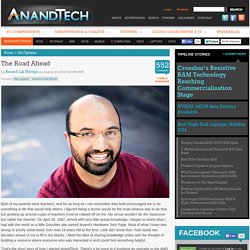 I figured being a doctor would be the most obvious way to do that, but growing up around a pair of teachers must’ve rubbed off on me. The Award-Winning MacLovin' Bundle. Keyboard Maestro 6.4.6: Work Faster with Macros for Mac OS X. Software > Tips and Tricks for Keyboard Maestro. Keyboard Maestro (4.3.1 at the time of original writing) is a fantastic macro program that I've been happily using (and beta testing) for years and for tons of different things. 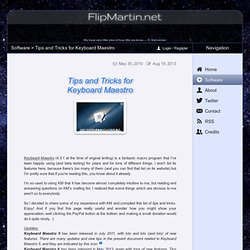 I won't list its features here, because there's too many of them (and you can find that list on its website) but I'm pretty sure that if you're reading this, you know about it already. I'm so used to using KM that it has become almost completely intuitive to me, but reading and answering questions on KM's mailing list, I realized that some things which are obvious to me aren't so to everybody.

So I decided to share some of my experience with KM and compiled this list of tips and tricks. Enjoy! Categories > Development > Macdrifter Results for: 'maestro'. Result page: 1. How to Search All searching is based on Sphider-Plus features. 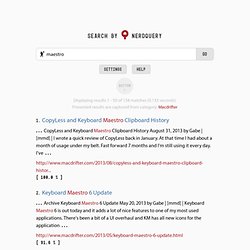 Boolean Use the AND or OR boolean options in the Fiddle With Your Results panel to control how multiple term queries are performed. Substring Search. OWC DIDIM27SSD11 DIY Kit for all Apple 27" iMac... in stock at OWC. Add a 3G or 6G Solid State Drive (sold separately) to your hard drive only equipped iMac to experience faster booting, near instant application launches and data transfer speeds up to 559MB/s! iMac Intel 27" Mid 2011 Dual Hard Drive Kit - iFixit. My Problem The 1TB hard drive in my 2011 iMac started failing. VoodooPad from Plausible Labs. Tabs Open pages in multiple tabs, all in the same window. Support for big documents Stuff gigabytes of data inside a VoodooPad document, it won't mind. Embed images, PDFs, and other types of files. VoodooPad can embed files such as images, PDFs, mp3s, and most other types of files as well. Print to VoodooPad PDF Service Print from any application as a PDF, and stick it in VoodooPad for safe keeping.

Script plugins Script Plugins are an easy way to extend the functionality of VoodooPad. DEVONthink Pro — Powerful document management for Mac. Keep everything in sync — fast, robust, and secure Use your databases on all your Macs, iPads, and iPhones. Collaborate in your team. It's ultra-fast, super robust, and strong encryption keeps prying eye out. Sync your data directly on the local network, via WebDAV or Dropbox, or using just anything mountable, e.g. a USB stick or SD card. Keyboard Maestro 6.4.3: Work Faster with Macros for Mac OS X. Is the premier manufacturer of high quality digital storage. 25 Really Cool Gadgets You Can Actually Buy. A gadget is a small tool such as a machine that has a particular function, but is often thought of as a novelty. Gadgets are sometimes referred to as gizmos. We are showcasing 20 Really Cool Gadgets You can actually buy, and I am sure most of the people will find them useful as well.