'Google-like' search engine puts NSA snooping back in the spotlight. The Reichstag building is pictured though a flag depicting fugitive former U.S. 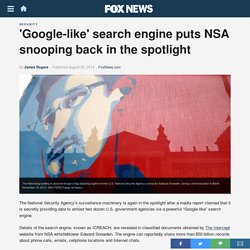 National Security Agency contractor Edward Snowden, during a demonstration in Berlin November 18, 2013. (REUTERS/Tobias Schwarz) The National Security Agency’s surveillance machinery is again in the spotlight after a media report claimed that it is secretly providing data to almost two dozen U.S. government agencies via a powerful “Google-like” search engine.

Details of the search engine, known as ICREACH, are revealed in classified documents obtained by The Intercept website from NSA whistleblower Edward Snowden. The engine can reportedly share more than 850 billion records about phone calls, emails, cellphone locations and Internet chats. The Office of the Director of National Intelligence (ODNI) did not confirm or deny the existence of ICREACH in a statement emailed to FoxNews.com, but said that data sharing is crucial to U.S. national security. NSA Is Watching You: Here's How to Avoid Being Spied On. Fresh documents reveal that the NSA is spying on your internet chats through a highly secretive operation known as PRISM (much like PRISON). 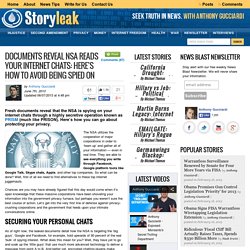 Here’s how you can go about protecting your privacy. The NSA utilizes the cooperation of major corporations in order to ‘team up’ and gather all of your information — even in real time. They are able to see everything you write through Facebook, Google platform tools like Google Talk, Skype chats, Apple, and other top companies. So what can be done? Well, first of all we need to find alternatives to these top internet juggernauts. Chances are you may have already figured that this day would come when it’s open knowledge that these massive corporations have been shoveling your information into the government privacy furnace, but perhaps you weren’t sure the best course of action.

Securing Your Personal Chats As of right now, the leaked documents detail how the NSA is targeting the ‘big guys’. The NSA might be reading your searches, but your local police probably aren’t. The former monitoring base of the NSA in Germany. 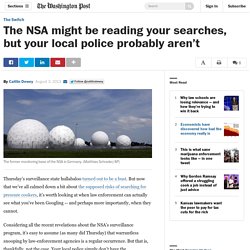 (Matthias Schrader/AP) Thursday's surveillance state hullabaloo turned out to be a bust. But now that we’ve all calmed down a bit about the supposed risks of searching for pressure cookers, it’s worth looking at when law enforcement can actually see what you’ve been Googling -- and perhaps more importantly, when they cannot. Considering all the recent revelations about the NSA’s surveillance program, it’s easy to assume (as many did Thursday) that warrantless snooping by law-enforcement agencies is a regular occurrence. But that is, thankfully, not the case. We asked Hanni Fakhoury, a staff attorney at the Electronic Frontier Foundation, to lay out exactly when and how state and federal law enforcement can obtain a record of your Google searches. 1. 2. 3.

All this goes to show that your local police will never be able to spy on your searches unless you’ve done something to convince a judge that you’re up to no good. Continue reading. 5 Ways to Thwart the NSA and Gov’t from Spying on You. Recent news of the NSA collecting metadata of phone calls from communication companies, along with federal law enforcement seeming to continue to press for expansion of its ability to collect personal information online without warrants, has many questioning how safe their own privacy is. 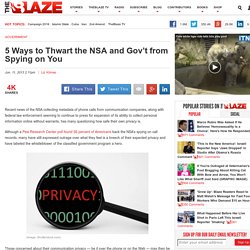 Although a Pew Research Center poll found 56 percent of Americans back the NSA’s spying on call records, many have still expressed outrage over what they feel is a breech of their expected privacy and have labeled the whistleblower of the classified government program a hero. (Image: Shutterstock.com) Those concerned about their communication privacy — be it over the phone or on the Web — may then be wondering: Is there anything to be done?

Is full privacy even possible? We went searching and found a few answers. 1. But as Elad Yoran, CEO of the IT security company Vaultive, told TheBlaze “the choice of not communicating electronically is not one that’s real for us.” 2. 3. Encrypted data code. 4. DuckDuckGo, The PRISM-Proof Search Engine That the NSA Just Can’t Track. In the wake of the NSA’s spying revelations, a golden opportunity has arisen for lesser known web services that offer guarantees against government snooping.

Admittedly, a large number of web users will probably never leave the likes of Google and Microsoft simply because they don’t care all that much about their privacy anyway, but there’s plenty of evidence to suggest that a good number of people are seeking out alternatives. Take the case of DuckDuckGo for example, the private search engine that has just reported record breaking levels of traffic since the NSAgate scandal erupted. This week, it recorded 2.25 million direct searches – a massive 26% increase over the week before and the first time its ever broken the two million barrier.

These stats alone tell us that there’s a large number of web users out there who are keen and eager to find ways of avoiding government snooping – something that also happens to be DuckDuckGo’s major selling point.