Using Camel Routes In Java EE Components. I’ve been working with Camel since a while now and I really like it’s simplicity. 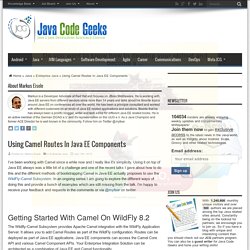 Using it on top of Java EE always was a little bit of a challenge and one of the recent talks I gave about how to do this and the different methods of bootstrapping Camel in Java EE actually proposes to use the WildFly-Camel Subsystem. In an ongoing series I am going to explore the different ways of doing this and provide a bunch of examples which are still missing from the talk. I’m happy to receive your feedback and requests in the comments or via @myfear on twitter. Getting Started With Camel On WildFly 8.2 The Wildfly-Camel Subsystem provides Apache Camel integration with the WildFly Application Server. Remark: Latest WildFly 9 is expected to be supported by the 3.x release of WildFly-Camel. Getting Ready Download and unzip WildFly 8.2.0.Final to a folder of your choice. One of the fastest ways to get up and running is with Docker and the WildFly Camel image. Netflix OSS, meet Docker! Background At Nirmata, we are building a cloud services platform to help customers rapidly build cloud ready applications. 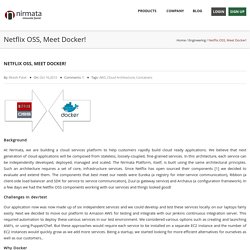 We believe that next generation of cloud applications will be composed from stateless, loosely-coupled, fine-grained services. In this architecture, each service can be independently developed, deployed, managed and scaled. The Nirmata Platform, itself, is built using the same architectural principles. Such an architecture requires a set of core, infrastructure services. Challenges in dev/test Our application now was now made up of six independent services and we could develop and test these services locally on our laptops fairly easily. 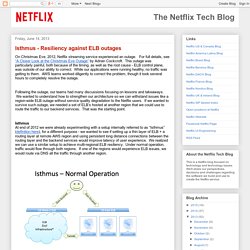 For full details, see “A Closer Look at the Christmas Eve Outage” by Adrian Cockcroft. This outage was particularly painful, both because of the timing, as well as the root cause - ELB control plane, was outside of our ability to correct. While our applications were running healthy, no traffic was getting to them. AWS teams worked diligently to correct the problem, though it took several hours to completely resolve the outage. Following the outage, our teams had many discussions focusing on lessons and takeaways. Isthmus At end of 2012 we were already experimenting with a setup internally referred to as “Isthmus” (definition here), for a different purpose - we wanted to see if setting up a thin layer of ELB + a routing layer at remote AWS region and using persistent long distance connections between the routing layer and the backend services would improve latency of user experience. 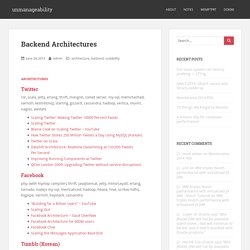 Build self-healing distributed systems with Spring Cloud. Microservices have become the hottest topic in software architecture over the past year, and much can be said about their benefits. 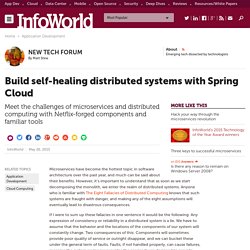 However, it’s important to understand that as soon as we start decomposing the monolith, we enter the realm of distributed systems. Anyone who is familiar with The Eight Fallacies of Distributed Computing knows that such systems are fraught with danger, and making any of the eight assumptions will eventually lead to disastrous consequences. If I were to sum up these fallacies in one sentence it would be the following: Any expression of consistency or reliability in a distributed system is a lie. We have to assume that the behavior and the locations of the components of our system will constantly change. Two consequences of this: Components will sometimes provide poor quality of service or outright disappear, and we can bucket these under the general term of faults.

Netflix has for some time been the poster child for microservice architectures. Building microservices with Spring Cloud and Netflix OSS, part 1. In the previous blog post we defined an operations model for usage of microservices. 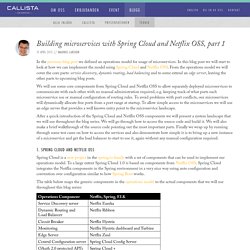 In this blog post we will start to look at how we can implement the model using Spring Cloud and Netflix OSS. From the operations model we will cover the core parts: service discovery, dynamic routing, load balancing and to some extend an edge server, leaving the other parts to upcoming blog posts. We will use some core components from Spring Cloud and Netflix OSS to allow separately deployed microservices to communicate with each other with no manual administration required, e.g. keeping track of what ports each microservice use or manual configuration of routing rules. To avoid problems with port conflicts, our microservices will dynamically allocate free ports from a port range at startup. 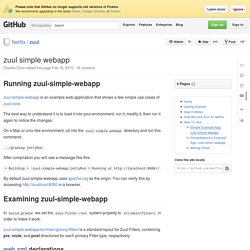 The best way to understand it is to load it into your environment, run it, modify it, then run it again to notice the changes. On a Mac or unix-like environment, cd into the zuul-simple-webapp directory and run this command: .. /gradlew jettyRun. Cloud Netflix. Netflix has created a library called Hystrix that implements the circuit breaker pattern. 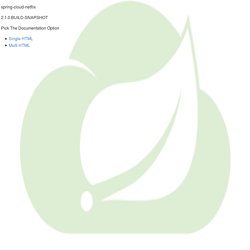 In a microservice architecture it is common to have multiple layers of service calls. Figure 1. Microservice Graph A service failure in the lower level of services can cause cascading failure all the way up to the user. When calls to a particular service reach a certain threshold (20 failures in 5 seconds is the default in Hystrix), the circuit opens and the call is not made. Figure 2. Having an open circuit stops cascading failures and allows overwhelmed or failing services time to heal. The @HystrixCommand is provided by a Netflix contrib library called "javanica". Announcing Zuul: Edge Service in the Cloud. Home · Netflix/zuul Wiki. Spring cloud - Zuul Reverse Proxy Language Understanding. Java - Spring Cloud - Zuul Proxy is producing a No 'Access-Control-Allow-Origin' ajax response. Spring cloud zuul proxy mapping with Spring Data Rest API. Spring Cloud Netflix.