How To Be Good. What makes me the same person throughout my life, and a different person from you? 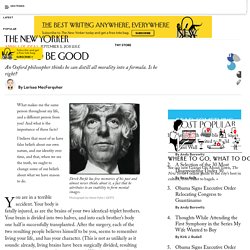 And what is the importance of these facts? I believe that most of us have false beliefs about our own nature, and our identity over time, and that, when we see the truth, we ought to change some of our beliefs about what we have reason to do. You are in a terrible accident. Your body is fatally injured, as are the brains of your two identical-triplet brothers. Your brain is divided into two halves, and into each brother’s body one half is successfully transplanted. The philosopher Derek Parfit believes that neither of the people is you, but that this doesn’t matter. Parfit is thought by many to be the most original moral philosopher in the English-speaking world. Suppose that a scientist were to begin replacing your cells, one by one, with those of Greta Garbo at the age of thirty. Is the truth depressing? When I believed that my existence was such a further fact, I seemed imprisoned in myself. . . . Philosopher's Zone. Home. 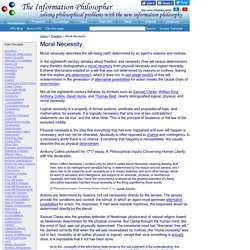 In the eighteenth-century debates about freedom and necessity (free will versus determinism), many thinkers distinguished a moral necessity from physical necessity and logical necessity. Extreme libertarians insisted on a will that was not determined by reasons or motives, fearing that this implies pre-determinism, which it does not. In two-stage models of free will, indeterminism in the generation of alternative possibilities for action breaks the causal chain of determinism. Not all the eighteenth century debates, by thinkers such as Samuel Clarke, William King, Anthony Collins, David Hume, and Thomas Reid, clearly distinguished logical, physical, and moral necessity. 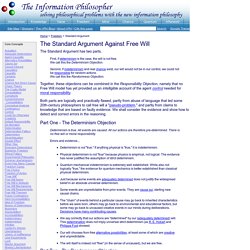 First, if determinism is the case, the will is not free. We call this the Determinism Objection. Second, if indeterminism and real chance exist, our will would not be in our control, we could not be responsible for random actions. We call this the Randomness Objection. Together, these objections can be combined in the Responsibility Objection, namely that no Free Will model has yet provided us an intelligible account of the agent control needed for moral responsibility. Both parts are logically and practically flawed, partly from abuse of language that led some 20th-century philosophers to call free will a "pseudo-problem," and partly from claims to knowledge that are based on faulty evidence. Part One - The Determinism Objection Determinism is true. Part Two - The Randomness Objection Chance exists. Examples of the Standard Argument (70) XXV. John Fiske's Version "Volitions are either caused or they are not. Philosophical Jargonology. Ludwig.Wittgenstein.-.Philosophical.Investigations. 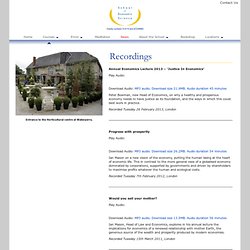 Download size 21.9MB. Audio duration 45 minutes Peter Bowman, new Head of Economics, on why a healthy and prosperous economy needs to have justice as its foundation, and the ways in which this could best work in practice. Recorded Tuesday 26 February 2013, London Progress with prosperity Download Audio: MP3 audio. Ian Mason on a new vision of the economy, putting the human being at the heart of economic life. Recorded Tuesday 7th February 2012, London Would you sell your mother? Download Audio: MP3 audio. Ian Mason, Head of Law and Economics, explores in his annual lecture the implications for economics of a renewed relationship with mother Earth, the generous source of the wealth and prosperity produced by modern economies.