Inside the Brompton Wide Range (BWR) Hub. It has been quite a while since I have written anything technical about bikes. 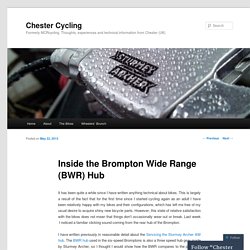 This is largely a result of the fact that for the first time since I started cycling again as an adult I have been relatively happy with my bikes and their configurations, which has left me free of my usual desire to acquire shiny new bicycle parts. However, this state of relative satisfaction with the bikes does not mean that things don’t occasionally wear out or break. Last week I noticed a familiar clicking sound coming from the rear hub of the Brompton. I have written previously in reasonable detail about the Servicing the Sturmey Archer AW hub. The BWR hub used in the six-speed Bromptons is also a three speed hub gear made by Sturmey Archer, so I thought I would show how the BWR compares to the pictures I took of the 1976 AW hub for the aforementioned post.

The planet cage differs significantly between the old AW hub and the BWR. The gear ring has 60 teeth in the old AW, new NIG hubs and BWR. Carbon Folding Bike - chedech. Request from Commuting Bike Riders Folds small in one quick moment, with ease.Light enough to carry by hand.Runs fast and pleasant to ride.Absorbs riding impact for comfort. = Carbon Folding Bike, chedech!! 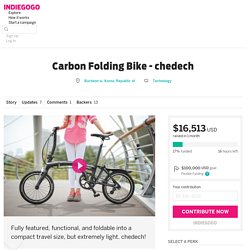 Strong Points of chedech 1. Fast and easy to fold into a small, convenient, compact size. One of the main features of chedech is its small-sized folding function, which is perfectly suited for commuting. 2. Chedech uses a special carbon material that is used throughout the frame (main and rear) and handles. All the major parts are made of carbon fiber, and that leads to a comparatively lightweight bike. This lightweight design helps you to ride faster, and you can also ride uphill more easily. 3. We completely understand where to use carbon and where to use metal. 4. 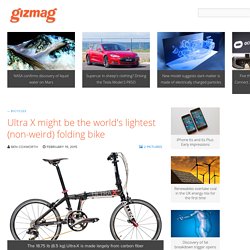 Allen Sports' new Ultra X, however, tips the scales at just 18.75 lb (8.5 kg). The carbon fiber commuter may just be the world's lightest folding bike ... or at least, the lightest one that looks relatively normal. Along with its frame, the Ultra X also sports a carbon fiber fork, seat post, handlebar, stem, rims, crankset and saddle(!). It also features 20 x 1-1/8-inch tires, and an SRAM X9 20-speed drivetrain (with a Shimano front derailleur). It can reportedly be folded down and locked together within seven seconds, and then wheeled around like a shipping dolly on its now-side-by-side wheels. All that carbon fiber will cost ya, though. The next-lightest "conventional" folding bike we could find is a titanium Brompton, although claimed weights for it are more around 20 lb (9 kg).

Source: Allen Sports About the Author All articles by Ben Coxworth. World's smallest and lightest foldable bicycle. June 26, 2006 Fold-up bikes are certainly not new though none to date have deserved the moniker “portable”. 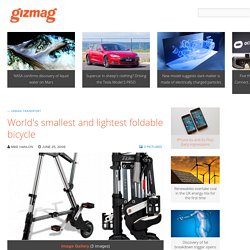 Most use the same heavy chain sets and bulky 16 to 20 inch wheels and traditional materials and are at best luggable. The A-Bike is a folding pushbike that is claimed to be small enough so that you can take it on public transport with a no-bicycles policy. The US$300 A-bike utilises automotive grade, engineering polymers for its structural components, saddle and handlebars and has a level of stiffness, fatigue and impact resistance comparable with aero-grade aluminium. By using these new materials, the A-bike’s weight has been reduced to just 5.5 kg (12 lbs), which is manageable for even slightly-built individuals. Helix - The World's Best Folding Bike. Folding Bikes. Sixteen-inch wheels. LIOS Nano Folding Bike. Folding Bikes. The Lightest Folding Bike In The World.