The 21st Century Future in Motion. The Engine. The forgotten hunger strike. DHAKA, Bangladesh — By the eighth day of the hunger strike, Mijanur Rahaman had lost 15 pounds of bodyweight, and his blood pressure had plummeted. 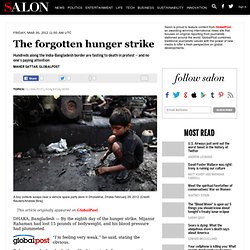 “I’m feeling very weak,” he said, stating the obvious. Rahaman and a hundred others like him — including women and children — are 10 days into what they say is a fast-unto-death, a desperate call for release from a permanent state of limbo for the residents of the India-Bangladesh enclaves. Officially known as “adverse possessions” — and colloquially known as “chitmahals,” or paper palaces — are a collection of Indian and Bangladeshi villages home to 51,000 people, where for generations, citizens have been stuck on the wrong side of the border.

The residents of the 102 enclaves inside Bangladesh are technically citizens of India. Those in the 71 enclaves inside India are technically citizens of Bangladesh. They are unable to leave their villages without illegally trespassing on foreign soil. A grand Indian tradition. The War for India's Internet - By Rebecca MacKinnon. "65 years since your independence," a new battle for freedom is under way in India -- according to a YouTube video uploaded by an Indian member of Anonymous, the global "hacktivist" movement. 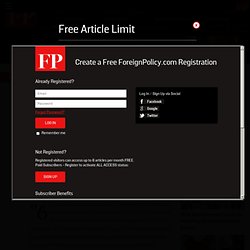 With popular websites like Vimeo.com blocked across India by court order, the video calls for action: "Fight for your rights. Fight for India. " Over the past several weeks, the group has launched distributed denial-of-service attacks against websites belonging to Internet service providers, government departments, India's Supreme Court, and two political parties. Street protests are being planned for this coming Saturday, June 9, in as many as 18 cities to protest laws and other government actions that a growing number of Indian Internet users believe have violated their right to free expression and privacy online. A lively national Internet freedom movement has grown rapidly across India since the beginning of this year. India is not China or Iran, however. Manjunath Kiran/AFP/GettyImages. "An India-Pakistan Thaw?" by Shashi Tharoor. Exit from comment view mode. Click to hide this space NEW DELHI – India and Pakistan are enjoying one of the better periods in their turbulent relationship.

Recent months have witnessed no terrorist incidents, no escalating rhetoric, and no diplomatic flashpoints. Pakistani President Asif Ali Zardari just made a successful, if brief, personal visit to India (mainly to visit a famous shrine, but with a lunch with Prime Minister Manmohan Singh thrown in). Sixteen years after India granted Pakistan most-favored-nation (MFN) trading status, Pakistan is on the verge of reciprocating. And yet it is important to understand that the problems that have long beset the bilateral relationship will not be resolved overnight.

“These jihadi groups recruit from the millions of young Pakistanis who emerge from vernacular schools and madrassas, imbued with a hatred for the modern world, in which they do not have the skills to work. This is not a counsel of despair. Will India Ever Really Be America's Partner? - By Christopher Clary. Secretary of Defense Panetta told an Indian audience last week that "defense cooperation with India is a linchpin" of U.S. efforts to "rebalance" its defense presence in the Asia-Pacific. 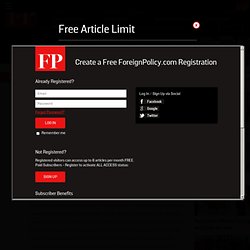 At a time when most American allies are plagued by shrinking economies, aging workforces, and contracting militaries, India stands out as a potential "net security provider" in Asia. Even though the Indian economy has hit a rough patch in the last few months, overall it is expanding -- along with the country's population and military. The problem is that India does not necessarily share the U.S. vision of an ever-closer strategic relationship. Distant for much of the Cold War, the U.S. and Indian defense establishments began intermittent flirtation in the 1990s punctuated by a three-year halt after India's 1998 nuclear tests. In 2001, the United States and India resumed defense cooperation. Jim Watson - Pool/Getty Images Be ready for a conflict with China LIU JIN/AFP/GettyImages ADEK BRRY/AFP/GettyImages.