Roy Dekel is a venture capitalist with over 10 years of real estate experience under his belt. He has invested in multiple markets including the finance and entertainment industries, merchant services and Real Estate Developments. Roy has served in multiple professional roles such as the Director of Business Development, President, Co-Founder, CEO, and Partner in his portfolio companies. In addition to his strong career track, Roy has served as an active member of a variety of charitable organizations, promoting the growth and development of the Israeli and Jewish communities.

Roy Dekel Archives - SalesTechStar. Roy Dekel's Foundation. CEO World Awards® “CEO of the Year” IRVINE, Calif., May 25, 2017 (GLOBE NEWSWIRE) -- With ten years in real estate and three years building and leading a first-of-its-kind real estate technology firm, Roy Dekel, CEO of SetSchedule, is being recognized once again for his influence and leadership in the industry, this time as one of the winners of the prestigious CEO World Awards®. 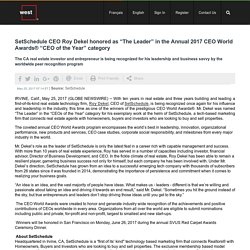 Mr. Dekel was named “The Leader” in the “CEOs of the Year” category for his exemplary work at the helm of SetSchedule, a tech-based marketing firm that connects real estate agents with homeowners, buyers and investors who are looking to buy and sell properties. The coveted annual CEO World Awards program encompasses the world’s best in leadership, innovation, organizational performance, new products and services, CEO case studies, corporate social responsibility, and milestones from every major industry in the world. Mr. Dekel’s role as the leader of SetSchedule is only the latest feat in a career rich with capable management and success. Are Real Estate Agents Still Relevant In The Age Of Tech? — Roy Dekel. 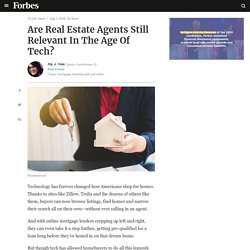 Thanks to sites like Zillow, Trulia and the dozens of others like them, buyers can now browse listings, find homes and narrow their search all on their own—without ever calling in an agent. And with online mortgage lenders cropping up left and right, they can even take it a step further, getting pre-qualified for a loan long before they’ve honed in on that dream home. But though tech has allowed homebuyers to do all this legwork themselves, in most cases, they’re still forced to go through agents to finalize the transaction. And those agents? They get the same 3% commission they did decades ago—for seemingly doing a fraction of the work.

It’s a situation that baffles many first-time buyers, particularly those of the Millennial cohort who have grown up buying everything from cars to mattresses to groceries completely online and all on their own. But are agents actually doing less work with all this tech? The Best Places To Invest In A Second Home For 2019. With interest rates likely to be higher in the coming months, the time to make a move on purchasing another residence is sooner rather than later. 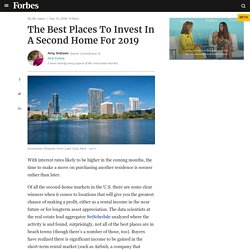 Of all the second-home markets in the U.S. there are some clear winners when it comes to locations that will give you the greatest chance of making a profit, either as a rental income in the near future or for longterm asset appreciation. The data scientists at the real estate lead aggregator SetSchedule analyzed where the activity is and found, surprisingly, not all of the best places are in beach towns (though there's a number of those, too).

Buyers have realized there is significant income to be gained in the short-term rental market (such as Airbnb, a company that has earned $2.7 billion in its first ten years) and so cities near major centers of commerce can also provide a viable investment (plus, they avoid the hassles that come with renting to people having fun on vacation versus those that came to town to get work done). When Your Smart Tech Needs a Boost. Sales technology is becoming integral to the closing a deal. 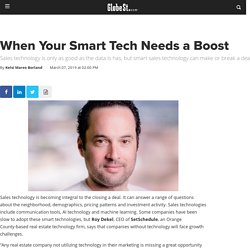 It can answer a range of questions about the neighborhood, demographics, pricing patterns and investment activity. Sales technologies include communication tools, AI technology and machine learning. Some companies have been slow to adopt these smart technologies, but Roy Dekel, CEO of SetSchedule, an Orange County-based real estate technology firm, says that companies without technology will face growth challenges. 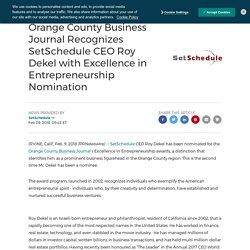 This is the second time Mr. Dekel has been a nominee. The award program, launched in 2002, recognizes individuals who exemplify the American entrepreneurial spirit – individuals who, by their creativity and determination, have established and nurtured successful business ventures. Roy Dekel is an Israeli-born entrepreneur and philanthropist, resident of California since 2002, that is rapidly becoming one of the most respected names in the United States. He has worked in finance, real estate, technology, and even dabbled in the movie industry. "Entrepreneurs propel our country and our economy forward, constantly developing new and innovative approaches to business," Mr.