Why is Japan teetering on the edge of a recession? It was a dull news day yesterday. 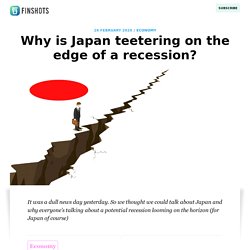 So we thought we could talk about Japan and why everyone’s talking about a potential recession looming on the horizon (for Japan of course) The Story In the last quarter of 2019, Japan’s economy contracted by 6.3% compared to the quarter last year, raising fears of a recession — the kind of thing that happens when a country sees negative economic growth for two consecutive quarters. (Very bad, this!!!) And the thing is, the Japanese economy doesn’t look like it’s going to be growing any time soon. But the timing was really bad. Here’s the bottom line. In the 1980s. Because come 1990, the Japanese government began to realise that this was unsustainable.

Then in 2012, Japan’s Prime Minister Shinzō Abe was re-elected. He immediately launched a series of reforms that were dubbed ‘Abenomics’. First, he asked Japan’s central bank to print money — between 60–70 trillion Yen. Unfortunately, most of these reforms haven’t worked as well. Why China’s Rushing to Mint Its Own Digital Currency. Vanguard Patented a Method to Avoid Taxes on Mutual Funds. Like flipping a light switch, Vanguard Group Inc. has figured out a way to shut off taxes in its mutual funds.

The first to benefit was the Vanguard Total Stock Market Index Fund. Investors’ end-of-year tax forms abruptly stopped showing capital gains in 2001, even as the fund went on to generate billions of dollars of them. By 2011, Vanguard had flipped the switch in 14 stock funds. In all, these funds have booked $191 billion in gains while reporting zero to the Internal Revenue Service. This astounding success gives Vanguard funds an edge over competitors. But a review of financial statements and trading data shows that Vanguard relies substantially on so-called heartbeat trades, which wash away taxes by rapidly pumping stocks in and out of a fund.

Here’s how it works: Vanguard attaches a more tax-efficient ETF to an existing mutual fund. How to Spot a Heartbeat Beginning in 2017, outflows stretched over five days. Since 2013, this fund used quarterly heartbeats. Taxable Gains Begone. Cross currency basis – what is it? And what are the implications? - Bond Vigilantes. Towards the end of this year, a December spike in the cross currency basis for major currencies against the dollar grabbed the market’s attention. 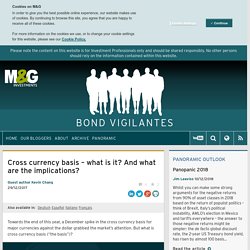 But what is cross currency basis (“the basis”)? Consider a European company taking a one year loan from its domestic local bank to fund its US operations abroad. In order to hedge the currency risk, the company enters into a one year EUR/USD currency swap with a market counterparty. The European company swaps a certain amount of Euros for US Dollars at today’s spot rate, agreeing to swap the funds back at the same rate in one year’s time. Because the European company doesn’t technically own the US Dollars, it will need to pay back US Libor as interest and by reciprocity, receive Euribor from its counterpart. In practice, however, whenever there’s a higher demand for the dollar, the counterparty lending the dollar will ask for a price premium. 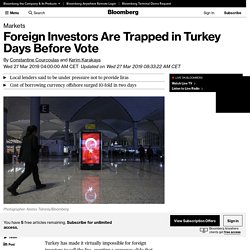 In your inbox before the open, every day. Sign up here. Turkey has made it virtually impossible for foreign investors to sell the lira, averting a currency slide that might have dealt a blow to President Recep Tayyip Erdogan before local elections this weekend. Days before the March 31 vote that’ll determine who governs Turkey’s cities, many foreign hedge funds are trapped in lira trades they want to exit because Turkish banks are under pressure not to provide liquidity, according to four bankers with direct knowledge of the transactions. This has stopped the lira, already the second-worst performing major currency in 2019, from sinking like it did in the weeks leading up to the vote last June that tightened Erdogan’s grip on power. Then the lira slid 5.1 percent on a single day on Friday, catching the market off guard. How Turkey’s Local Elections Became a Vote on Erdogan: QuickTake So far, it’s working.