Radhakishan Damani invested in 3 new stocks in Dec quarter; do you own any? Ace investor Radhakishan Shivkishan Damani, the second richest Indian with a wealth of $17.9 billion, picked up 2-3 percent equity stake in three companies including rival Spencer Retail during the quarter ended December 2019. 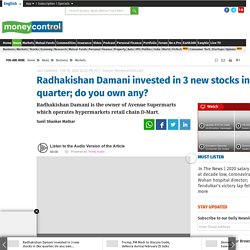 He bought 2.28 percent shares of construction company Simplex Infrastructures, 2.09 percent in RPG Group-owned Spencers Retail and 3.26 percent in cigarette manufacturer VST Industries, as per the latest shareholding pattern available on exchanges. Damani, who is also known for his stock investment skills, raised his shareholding in India Cements to 4.73 percent, from 1.3 percent in the September quarter. Among others, he continued to hold his shareholding in Foods and Inns, the country's second-largest food processing company, at 4.72 percent for the third consecutive quarter. Foods and Inns reported a 98 percent year-on-year fall in Q3FY20 profit at Rs 2.26 crore. This Best-Performing Portfolio Manager Says Risk-Reward Tradeoff Not Favourable Yet. Anxious equity investor? This is for you.

In meetings with investors, private bankers and advisors in recent weeks, it is often said that people are apprehensive on our existing equity positions and unsure of further investments because: 1. 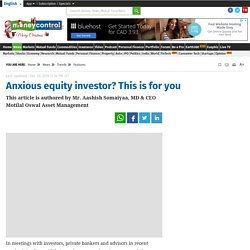 Creating magic out of moving averages. Shishir Asthana Leonardo Da Vinci’s words, ‘Simplicity is the ultimate sophistication’ rings as true for trading as it does for other fields. 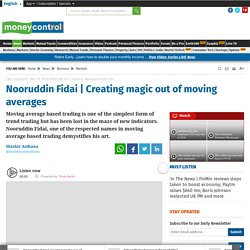 However, many technical analysts and traders in the market complicate their recommendations or strategies by using multiple indicators and jargons to impress fellow traders and novices. Moving averages are the simplest overlays on a price chart, and give a clear picture of the price movement. An options buyer journey to financial freedom. "Do not judge me by my success, judge me by how many times I fell down and got back up again. 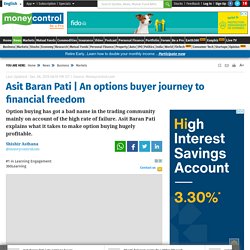 " These words from Nelson Mandela are true for every successful person, be it a businessman, sportsperson, musician or a trader. It is especially true in the case of Asit Baran Pati @asitbaran, who rose like a phoenix from the ashes of his creation. From a well paying Investment Banking job to live off his mother’s pension money, Asit has seen it all. It was his confidence and persistence in search of a winning formula and sticking to it that made him a successful trader. How Vishal Mehta undertook a journey from discretionary to system trading for consistent gains.

Shishir Asthana There are few traders in the world as well-networked as Vishal Mehta. 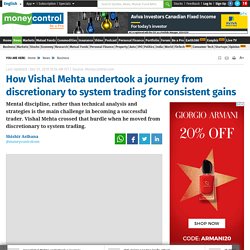 During his 15-year career as a trainer with Indian technical analysis software companies, and later with Reuters and Bloomberg, Vishal has met over 10,000 domestic and international traders. Mehta is a quintessential example of how difficult it is to become a trader. From being among the first 20 Chartered Market Technicians (CMT) in India to becoming the co-chair for the CMT Mumbai chapter, it took over a decade for him to become a successful trader. This stock cost Rakesh and Rekha Jhunjhunwala over Rs 100 crore this year. Abhinand Basavaraj: Optimising the power of compounding for consistent profits. At a recently organised investor carnival, co-sponsored by Moneycontrol in Goa, three professional traders were displaying their intraday trading skill in front of the audience. 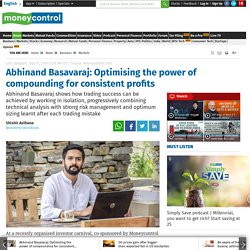 Despite each trader deploying a different trading style, all three were profitable on a day when the Bank Nifty fell by nearly 600 points. While many in the room were trying hard to imitate the trading style of these traders, unnoticed in the crowd a young trader was silently punching away his trades in a corner. Unlike other expert traders, he was trading Nifty options. Shareholders Beware Of These RPT Hacks Companies Use. Dr Amit Malik – A guide to mastering the traders' mindset. HNIs: HNI investors jittery as PMSes ask clients to take illiquid shares upon exit. There are signs of distress in some of the smallcap-focussed PMSes, or portfolio management schemes. 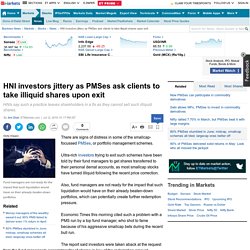 Ultra-rich investors trying to exit such schemes have been told by their fund managers to get shares transferred to their personal demat accounts, as most smallcap stocks have turned illiquid following the recent price correction. Also, fund managers are not ready for the impact that such liquidation would have on their already beaten-down portfolios, which can potentially create further redemption pressure.

Economic Times this morning cited such a problem with a PMS run by a top fund manager, who shot to fame because of his aggressive smallcap bets during the recent bull run. The report said investors were taken aback at the request from the fund manager to accept transfer of shares in lieu of the redemption amount. The portfolio manager in question has been trying to buy time from investors in recent times, saying that the companies he has invested in would turn around soon, it said. Dipen Sheth: Great days may be over for Eicher and Page, but it is still playing out for TCS: Dipen Sheth. 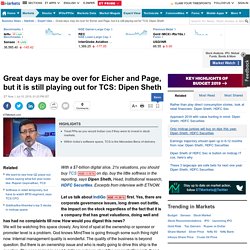 Sovit Manjani: An accountant's journey to becoming a systems trader. Shishir Asthana The trading world has more than its share of rags to riches stories which is why, perhaps, more people are attracted to it. 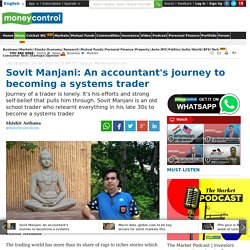 What is not visible behind these stories is the effort and sacrifice needed to come out as a winner. Behind every successful trader, is a story of not only efforts and sacrifices, but also that of his entire family. Money managers of the wealthy sweat it out; 90% PMS failed to deliver even 1% return in April. NEW DELHI: Majority of alpha chasers on Dalal Street again depressed investors in April. 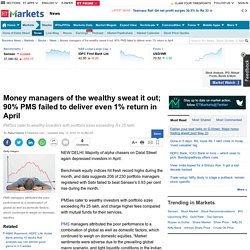 Benchmark equity indices hit fresh record highs during the month, and data suggests 206 of 230 portfolio managers registered with Sebi failed to beat Sensex’s 0.93 per cent rise during the month. PMSes cater to wealthy investors with portfolio sizes exceeding Rs 25 lakh, and charge higher fees compared with mutual funds for their services. PMS managers attributed the poor performance to a combination of global as well as domestic factors, which continued to weigh on domestic equities. “Market sentiments were adverse due to the prevailing global macro scenario, and tight liquidity conditions in the Indian market.

Indian Stock Markets: Portfolio Managers Post Loss In April, Wait For Election Storm To Pass. Why advisors should leave portfolio management to the experts. One aspect of my financial advisory practice that astonishes fellow advisors is that my team outsources the day-to-day responsibility of managing clients’ assets to mutual fund companies, exchange-traded fund providers and investment-counsel firms. For advisors who see their value proposition as “beating the index,” that revelation is a difficult one to grasp. The reason we’ve chosen this path is very simple. BQEdge: How Basant Maheshwari Avoids ‘Value Traps’ How do you say this stock is a value trap or a value buy? If a company has got a low return on equity like 13-15 percent, there has to be a problem somewhere.

Because your cost of debt is generally 12-13 percent. If you are generating 13-15 percent on your business, you are doing a 2-3 percent spread. Value trap is a stock which cannot do a return of equity more than 15-16 percent. Amit Jeswani: Next large midcap run may come in 2020-21, for now stick to largecaps: Amit Jeswani, Stallion Asset. There is always a bull market in at least some sector. So our idea is to just buy the sectors which will lead the next bull market, said Amit Jeswani, CIO, Stallion Asset, in an interview with ETNOW. Edited excerpts: Post a long weekend, post some key earnings and with end of elections inching closer, how do you see things shaping up over the near term particularly given that globally, we are seeing resilience?

The life of a portfolio manager at the current stage is really difficult. Shubham Agarwal, CMT, CFA, CQF, CFTe sur Twitter : "#Announcement #OptionStrategy #Backtesting we at @quantsappsocial are extremely excited to launch our #Options Strategy Backtesting API (yes it's a reality now Backtesting□)today at the event of @AlgoCon. Sensex, Nifty Outlook: Atul Suri Sees These Signs As A Precursor To Rally.

Election is a big event. But I ask myself what is my competence? Am I a political analyst? How Shankar Sharma picks stocks. Shankar Sharma, the vice chairman and joint managing director of First Global, loves to pick up the ugly ducklings in the stock arena. The art of finding bargains: A strategy that global contrarian investment firm Brookfield follows. Contrarians face two major dilemmas. From IIT to market: Secret of Neeraj Gupta’s successful trade management. Technical Analysis: Deciding trailing exit levels using ATR technical indicator. Shabbir Kayyumi Average true range (ATR) is a volatility indicator originally developed by J.