SNAKES slithered onto the scene over 100 MYA. True snakes do not have any legs, ears, eye-lids, or a nose. What the snake lacks for limbs, it makes up for in bones. Snakes have more bones than any other animal, including a skull that can be separated in order to ingest large food items.

SERPENS by Guido Mocafico. Serpents﻿ In Genesis 3:1-5 it is the serpent’s power that leads Eve to disobey God’s command and consequently cause the downfall of man and thus expulsion from the garden of Eden. 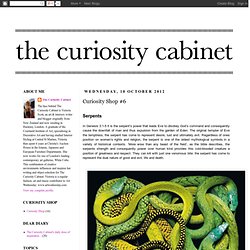 The original tempter of Eve the temptress, the serpent has come to represent desire, lust and ultimately evil. Regardless of ones position on women’s rights and religion, the serpent is one of the oldest mythological symbols in a variety of historical contexts. ‘More wise than any beast of the field’, as the bible describes, the serpents strength and consequently power over human kind provides this cold-blooded creature a position of greatness and respect.

They can kill with just one venomous bite: the serpent has come to represent the dual nature of good and evil, life and death. Guido Mocafico captures this dual nature in his photographs of snakes. Aside from large bodies of work for books and exhibitions, he has also produced an impressive array of commercial and editorial shoots. Boomslang Snake Packs a Deadly Bite. Karl Patterson Schmidt: The Herpetologist Who Documented His Own Death For Sc... Karl Patterson Schmidt was an eminent American herpetologist—one who studies amphibians and reptiles. 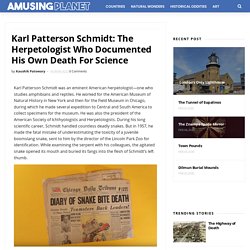 He worked for the American Museum of Natural History in New York and then for the Field Museum in Chicago, during which he made several expedition to Central and South America to collect specimens for the museum. He was also the president of the American Society of Ichthyologists and Herpetologists. During his long scientific career, Schmidt handled countless deadly snakes. But in 1957, he made the fatal mistake of underestimating the toxicity of a juvenile boomslang snake, sent to him by the director of the Lincoln Park Zoo for identification.

While examining the serpent with his colleagues, the agitated snake opened its mouth and buried its fangs into the flesh of Schmidt’s left thumb. “I took it from Dr. Less that 24 hours later, he was dead. He wrote in his journal: 4:30 - 5:30 PM strong nausea but without vomiting. After waking, Schmidt continued recording his observations: Snake skeleton [more bones than any other animal!] A snake skeleton consists primarily of the skull, vertebrae, and ribs, with only vestigial remnants of the limbs. 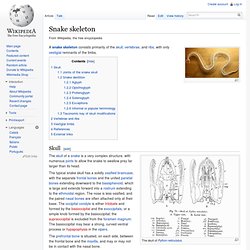 Skull[edit] The skull of a snake is a very complex structure, with numerous joints to allow the snake to swallow prey far larger than its head. The prefrontal bone is situated, on each side, between the frontal bone and the maxilla, and may or may not be in contact with the nasal bone. The premaxillary bone is single and small, and as a rule connected with the maxillary only by ligament. The paired vomer is narrow. Anaconda Skin Stokes Mystery of Maine’s Elusive 'Wessie' Most Venomous Snakes.

Venomous Snakes Common Cobra Death Adder King Brown Snake Prairie Rattlesnake When discussing lists of the world’s deadliest snakes, most people use just one criterion and do not to take into account other significant factors. 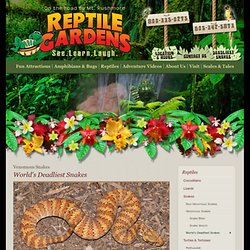 As a result, many Top 10 lists tend to be inaccurate or, at the very least, skewed. These lists are usually based solely on the toxicity of snake venoms; however, there are also people who focus their "deadliest snakes" lists on snake bite deaths in the countries in which they live or study, or are just fond of. Spiny, Venomous New Sea Snake Discovered. A new species of venomous sea snake mysteriously covered head to tail in spiny scales has been discovered in treacherous seas off northern Australia, a new study says. Though some other sea snakes have spiky scales on their bellies, "no other [known] sea snake has this curious feature," study leader Kanishka Ukuwela, an ecologist at the University of Adelaide, said by email. Normally snakes have smooth scales, but each of the newly named Hydrophis donaldi's scales has a spiny projection, he said. Scientists cruising shallow seagrass beds in the Gulf of Carpentaria (map) recently captured nine of the rough-scaled reptiles.

"The minute the first one landed on the deck, I knew we had something special," study co-author Bryan Fry of the University of Queensland in Brisbane, Australia, said by email. "It was quite unlike any of the sea snakes I have seen. " Evolution’s Most Effective Killer: Snake Venom. View Photo Gallery As predators, snakes are missing a few key attributes. 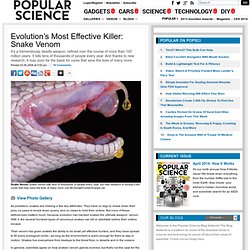 They have no legs to chase down their prey, no paws to knock down quarry, and no claws to hold their victims. But none of these deficiencies matters much, because evolution has handed snakes the ultimate weapon: venom. With it, the several hundred types of venomous snakes can kill or debilitate before their victims escape. Their venom has given snakes the ability to be small yet effective hunters, and they have spread to fill every ecological niche—as long as the environment is warm enough for them to stay in motion.

A Snake With A Single Foot Discovered In China.