PENGUINS are flightless birds well adapted to life at sea. All penguins have white bellies and dark backs in order to help conceal them from predators while in the water. Penguins range in size from the 2lb Little Penguin to the 75lb Emperor Penguin.

Most large penguins live in cold regions while smaller relatives live in more temperate areas. 150,000 penguins die after giant iceberg renders colony landlocked. An estimated 150,000 Adelie penguins living in Antarctica have died after an iceberg the size of Rome became grounded near their colony, forcing them to trek 60km to the sea for food. 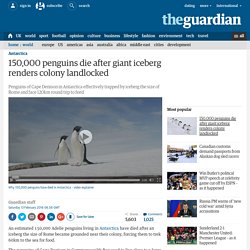 The penguins of Cape Denison in Commonwealth Bay used to live close to a large body of open water. However, in 2010 a colossal iceberg measuring 2900sq km became trapped in the bay, rendering the colony effectively landlocked. Penguins seeking food must now waddle 60km to the coast to fish. Over the years, the arduous journey has had a devastating effect on the size of the colony. Since 2011 the colony of 160,000 penguins has shrunk to just 10,000, according to research carried out by the Climate Change Research Centre at Australia’s University of New South Wales. 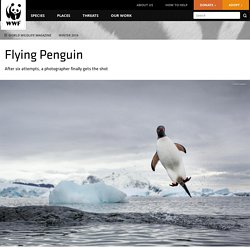 While on land, the birds don’t really use their wings for much beyond smacking each other about. But in the water they are strong and graceful swimmers, using their wings as flippers to propel themselves to surprising bursts of speed. When penguins approach shore, they often launch themselves into the air. Sometimes, it’s to escape from predators such as leopard seals. At other times, it seems like they are simply saving themselves a difficult climb up steep rocks, snow and ice. To get this shot, I spent day after day struggling to position my camera just right to catch penguins in midair.

It wasn’t easy. Galapagos Penguin Family. Cookie the Little Penguin at the Cincinnati Zoo. What a view. Sheepdogs protect endangered penguins. "No foxes have killed penguins in the past seven years" This is clever. 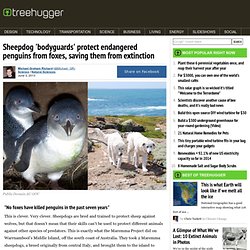 Very clever. Sheepdogs are bred and trained to protect sheep against wolves, but that doesn't mean that their skills can't be used to protect different animals against other species of predators. This is exactly what the Maremma Project did on Warrnambool’s Middle Island, off the south coast of Australia. They took 2 Maremma sheepdogs, a breed originally from central Italy, and brought them to the island to protect a dwindling and seriously endangered population of Little Penguins from foxes. The situation was dire around seven years ago when the sheepdogs were introduced: Where a colony of around 1,500 Little Penguins once thrived, only 4 breeding pairs remained.

Update: Meet the adorable Fairy Penguin, the smallest penguin species on Earth! Wikimedia/CC BY-SA 3.0 The Little Penguin (aka Fairy Penguin or Little Blue Penguin) is the smallest species of penguin. Flickr/CC BY 2.0 Above is an Australian fox. There Are Penguins Wearing Sweaters! Not only is this the best thing you will see all day, it's for a good cause. 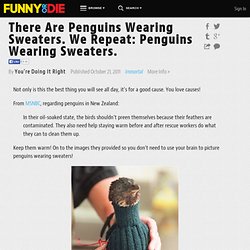 You love causes! From MSNBC, regarding penguins in New Zealand: In their oil-soaked state, the birds shouldn’t preen themselves because their feathers are contaminated. They also need help staying warm before and after rescue workers do what they can to clean them up. Keep them warm! Penguins. Range of Penguins. Penguins in Tide (Paul Nicklen) Three Chinstrap Penguins. Random photo Submit your photo Stumble Thru animal photography Tags: penguin Download three chinstrap penguins walking by a. laule 4 754 views Rating: +4 Adorable Photos of Animals With Their Babies That Will Make You Go ‘Aww’ 12 Amazing Photos From Freezing Antarctica emperor penguin youth hugging penguins play and dive, antarctic Place your ad here Loading... 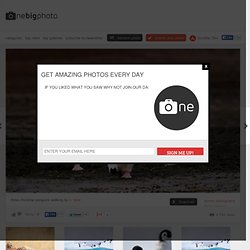 About OneBigPhoto is your daily dose of high quality photos. 2732 photos uploaded Important stuff. Japanese Penguin Goes Shopping. Crafty Penguin Busts Out of Tokyo Aquarium. Tuxedoed Swimmer on the Lam After scaling the walls of his enclosure to freedom, a one-year-old Humboldt penguin is on the run/swimafter escaping last Sunday morning. 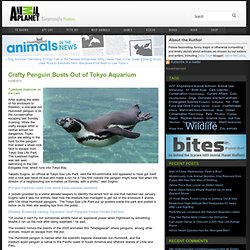 While the crafty escape artist is neither armed nor dangerous, Toyko police are aiding in the hunt for the penguin that scaled a sheer rock face to escape from Tokyo Sea Life Park. The tuxedoed fugitive was last seen swimming in the Old Edogawa river, which runs into Tokyo Bay. Takashi Sugino, an official at Tokyo Sea Life Park, said the 60-centimetre bird appeared to have got itself over a rock wall twice its size and made a run for it. "We first noticed the penguin might have fled when the director of a neighbouring zoo e-mailed us Sunday, with a photo," said Sugino. [Penguin Factoids: Learn more about these tuxedoed waddlers] A picture provided by a visitor allowed keepers to identify the errant bird as one that hatched last January. [Related: Brokeback Iceberg- Separated "Gay" Penguins Persue Female Partners] "Little Penguin" by Paul Souders. Peek-a-boo (Paul Nicklen) 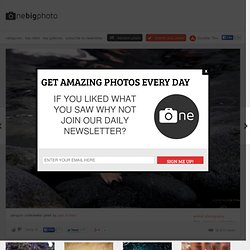