Leopard 'panther' with chittal deer fawn. Rare and Beautiful Amur Leopards. Melanistic Leopard or "Panther" A tiger chasing a leopard up a tree. Leopard Silohuete photographed by Scott Grubb. Amur leopard cub is born in Germany. The birth of an Amur leopard cub at Germany's Leipzig Zoo is huge news for her species, which is critically endangered. 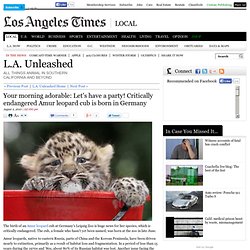 The cub, a female who hasn't yet been named, was born at the zoo in late June. Amur leopards, native to eastern Russia, parts of China and the Korean Peninsula, have been driven nearly to extinction, primarily as a result of habitat loss and fragmentation. In a period of less than 15 years during the 1970s and '80s, about 80% of its Russian habitat was lost. Another issue facing the species is poaching, since their impressively patterned coats fetch high prices on the black market. Today, it's estimated that fewer than 40 Amur leopards remain in the wild in Russia, and an even smaller number are thought to remain in China.

See more photos of the Leipzig Zoo's cub after the jump. RELATED CUTE CUBS: Your morning adorable: Clouded leopard cubs make their debut at Paris zoo Your morning adorable: Lion cubs get a checkup at Israeli zoo -- Lindsay Barnett. Leopard with giraffe calf. Leopard of Gummalapur. First hunt for the leopard[edit] Kenneth Anderson arrived at Gummalapur at the request of the District Magistrate in order to rid the area of the leopard. 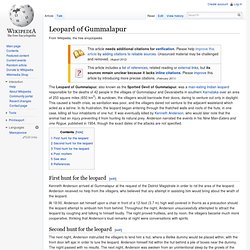 Anderson received no help from the villagers, who believed that any attempt in assisting him would bring about the wrath of the leopard. At 18:00, Anderson set himself upon a chair in front of a 12-foot (3.7 m) high wall covered in thorns as a precaution should the leopard attempt to ambush him from behind. Throughout the night, Anderson unsuccessfully attempted to attract the leopard by coughing and talking to himself loudly. The night proved fruitless, and by noon, the villagers became much more cooperative, thinking that Anderson’s loud remarks at night were conversations with spirits. Second hunt for the leopard[edit] The next night, Anderson instructed the villagers to lend him a hut, where a lifelike dummy would be placed within, with the front door left ajar in order to lure the leopard.

Third hunt for the leopard[edit] Beautiful Leopard. Rare Leopard Photographed in Remote Afghan Mountains. Camera traps positioned in the rocky terrain of Afghanistan's central highlands by conservationists recently snapped a surprising photograph of a Persian leopard, a top predator that was long thought to have disappeared from the region. 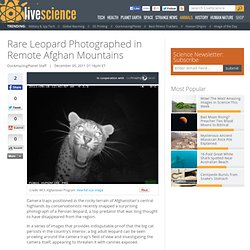 In a series of images that provides indisputable proof that the big cat persists in the country’s interior, a big adult leopard can be seen prowling around the camera trap’s field of view and investigating the camera itself, appearing to threaten it with canines exposed. Camera traps can be key resources in evaluating rare species, particularly in remote areas that are hard for conservationists to maintain a presence in. The cameras also snapped images of other wildlife, including lynx, wild cat, wolf, red fox, and stone marten, showing that many of these predators can find enough prey to survive in the Hindu Kush highlands, where Wildlife Conservation Society (WCS) scientists and Afghan rangers have been conducting surveys in recent months.