ELEPHANTS are the largest land animal alive today and considered one of the most intelligent. The 11,000lb African elephant sports two "fingers" on the end of their trunk and large ears to better dissipate heat.

The slightly smaller Asian elephant has only one "finger" and is more closely related to mammoths than to its African contemporary. 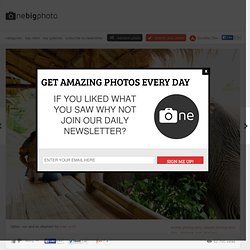 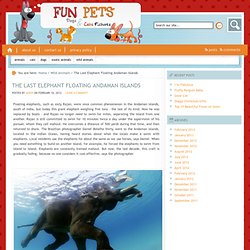 Now he was replaced by boats – and Rajan no longer need to swim for miles, separating the island from one another. Rajan is still committed to swim for 10 minutes twice a day under the supervision of his pursuer, whom they call mahout. He overcomes a distance of 500 yards during that time, and then returned to shore. Elephant and Dog Best Friends. African Elephant in Yellow Flower Field. Asiatic vs. African Elephant. GoPro: Elephant Lunch Break.

Elephant Pandas. So here’s the deal. Apparently, the Thai people really, really love pandas. They love pandas so much that they are willing to paint their national animal, the elephant, to look just like over-sized smelly versions of the cuddly bears. Keepers of Thailand’s Ayutthaya Elephant Kraal threw some paint on five of these huge rodentphobic mammals and paraded them through the streets, much to the pleasure of the Thai school children. Some seen to think that the elephant keepers have gone a little too far. But I look at it this way, at least these elephants aren’t being processed for meat, skin and ivory. Link. Painted Elephant Trunk. Random photo Submit your photo Stumble Thru animal photography Tags: 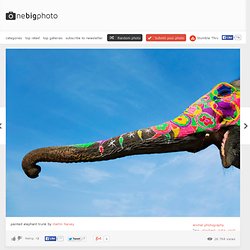 Motty the Hybrid Elephant. The Asian elephant Elephas maximus and the African elephant, Loxodonta africana are not only regarded as different species, but also belonging to different genus. 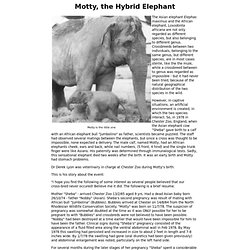 Crossbreeds between two individuals, belonging to the same genus, but different species, are in most cases sterile, like the the mule, while a crossbreed between to genus was regarded as impossible - but it had never been tried, because of the natural geographical distribution of the two species in the wild. However, in captive situations, an artificial environment is created, in which the two species interact. So, in 1978 in Chester Zoo, England, when the Asian elephant cow "Sheba" gave birth to a calf with an African elephant bull "Jumbolino" as father, scientists became puzzled.

The staff had observed several matings between the elephants, but since a cross was thought to be impossible, none expected a delivery. Dr Derek Lyon was veterinairy in charge at Chester Zoo during Motty's birth. This is his story about the event: Poachers massacre 68 elephants in Congo park. RABAT, Morocco (AP) — One of Africa's oldest national parks is under attack "from all fronts," its director said Friday after 68 elephants were slaughtered in two months by poachers, some of whom shot them from helicopters. 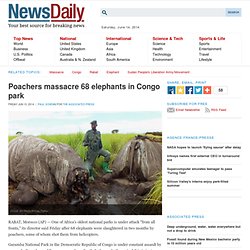 Garamba National Park in the Democratic Republic of Congo is under constant assault by renegade Congolese soldiers, gunmen from South Sudan and others. And this is just a slice of the poaching carnage: international wildlife regulators say 20,000 elephants were killed in Africa alone in 2013. The Johannesburg-based African Parks group, which manages Garamba, said since mid-April, the 5,000-square kilometer (1,900-square mile) park has faced an onslaught from several bands of poachers who have already killed 4 percent of its elephants.

"The situation is extremely serious," Garamba park manger Jean-Marc Froment said in the statement. "The park is under attack on all fronts. " An Asiatic elephant embraces his human. Random photo Submit your photo Stumble Thru. 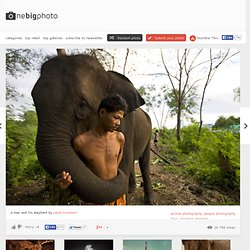 Beautiful photo. I wonder if the inspiration was some of the photos in Ashes and Snow. Photos from that exhibition are not postable but it is a great site to visit. – bsmitty 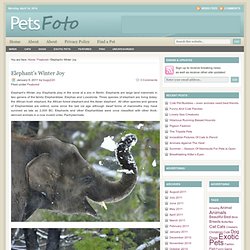 Happiness. Elephant Communication: How Elephants Talk Through Rumbles and Grumbles. Elephants are one of the smartest creatures on earth, and one of the few animals that have some form of speech. 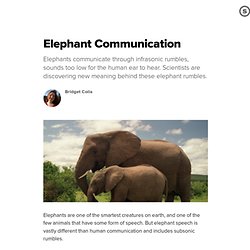 But elephant speech is vastly different than human communication and includes subsonic rumbles. Here are some of the questions scientists have been asking and the answers they've come up with so far: Do Elephants Talk? While elephants don't "talk," per say, at least not like humans do, they do have some forms of vocalization and communication that express specific concepts. In addition to snorts, trumpeting and croaking sounds, one of the most common forms of elephant communication is rumbling.

Researchers Katherine Leighty, Joseph Soltis and their colleagues at the Wildlife Tracking Center at Disney's Animal Kingdom have recently been conducting research on the elephants at the center to determine exactly what these rumbles mean and why elephants make these infrasonic sounds. How Far Can Elephant Rumbling Sounds Travel? Can Elephants Recognize Voices? In Dr. Sources: Katherine A. Asian Elephant Swimming. Asian Elephant.