ONE-ON-ONE COACHING As an aspiring actor I always dreamed about being able to talk to and ask an actual working professional actor the questions I could neve.

Preparedness. For every successful actor, there are countless unsuccessful ones. 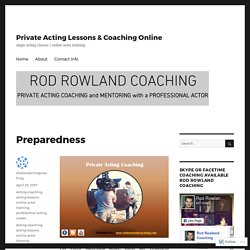 Is it because they lack talent? No. Casting directors cite numerous reasons for not hiring certain actors and it’s rarely ever about talent. The most important issues include: • Not doing the homework about a part: the sides and information provided to the actor gives them all the information they need to understand the character and also conduct some research about the part and/or or project. • Inability to follow directions: casting directors begin judging the actors before they even enter the room, so they need to follow every instruction, no matter how insignificant each may seem.

These are really only two examples. Improper preparedness is the common denominator in these issues. Online Acting Coaching. Online Actor Training. The Agent. Any actor who dreams of stardom knows they need a great agent. 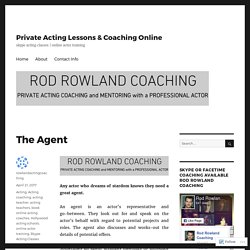 An agent is an actor’s representative and go-between. They look out for and speak on the actor’s behalf with regard to potential projects and roles. The agent also discusses and works-out the details of potential offers. Sometimes an agent arranges meetings to introduce the actor to casting directors, executives, producers, and other individuals who make decisions about roles. This is so that when certain opportunities arise, those individuals think of the actor. Should An Actor First Find an Agent Before You Look for Auditions? Professional Actors Classes. In 1997 Rod Rowland was cast in the X-Files. 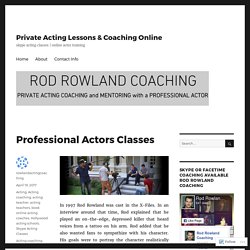 In an interview around that time, Rod explained that he played an on-the-edge, depressed killer that heard voices from a tattoo on his arm. Rod added that he also wanted fans to sympathize with his character. His goals were to portray the character realistically and to “nail” the scenes. Actors rarely talk like that in interviews. They mostly discuss the overall project or simply respond to the interviewer’s questions. Rod Rowling Coaching Most actors follow the script as written and all of them usually perform the character the exact same way. Keep on Studying and Learning. Finding Scheduling Classes and an Acting Teacher. Rod Rowland Acting Reel. Acting and Audition Skills in Rod Rowland Coaching. Selecting a Professional Acting Coach and/or Teacher. Of course a few actors achieve success without any kind of formal education or professional actors classes or professional acting coaching. 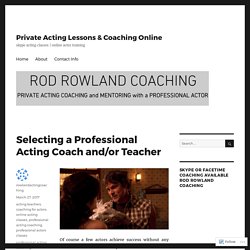 There are always a few exceptions to the standard rules. But, training and coaching, especially in the field of professional acting, is usually a must. The individual attempting to break into acting not only needs to perfect their craft, they also need to understand the business. Many universities and colleges offer terrific programs, yet there is a difference between the theoretical world of acting and what actually goes on. This doesn’t mean that an academic program isn’t helpful – it is, but not all aspiring actors have the resources or time to attend college.

Private Acting Coaching. Online Acting Classes and Coaching. For every successful actor, there are thousands of others struggling. 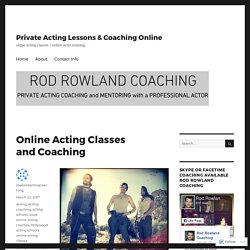 Achieve Success in Your Professional Acting Career. Put the term “Hollywood Acting schools” into an Internet search engine and you’ll get over 2 million results. 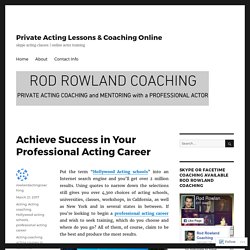 Using quotes to narrow down the selections still gives you over 4,300 choices of acting schools, universities, classes, workshops, in California, as well as New York and in several states in between. If you’re looking to begin a professional acting career and wish to seek training, which do you choose and where do you go? All of them, of course, claim to be the best and produce the most results. Actor Rod Rowland spent his twenties trying to find the right the right trainers, but instead, wasted time trusting those who simply called themselves experts. Skype Acting Classes. Keeping Acting and Audition Skills Solid. The aspiring actor hoping to make it in Hollywood, the land of television and movies, has a host of acting courses in California from which to choose. 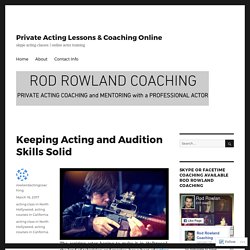 Within the thousands, there are probably a few that are decent. A hopeful actor always needs training and coaching to refine their technique and keep their skills solid. That’s always understood. The one major area an actor always needs to focus upon is the audition. Finding an Acting Teacher and Scheduling Classes. The Audition. Most actors hate auditioning. 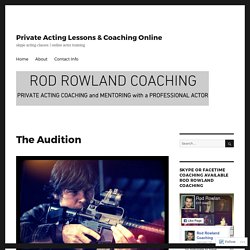 Really hate it. And, for good reason. It’s an extremely stressful act of desperation, performed in front of apathetic strangers. The actor puts all they have into their performance, pour out their emotions, and compete against a group of others just like them, some of whom may even be close friends, for one single opportunity, and prays with all they have they did well and were liked. Benefits of an Acting Coach. All Actors Are Different So, you’re an actor. 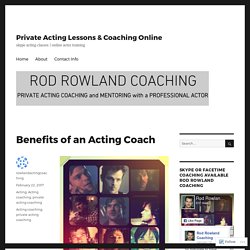 You’re probably auditioning or hoping to audition for roles. You either studied acting formally or just now decided to act. You’re looking to work in film or perhaps theater. Perhaps you already had a few roles or only did background a few times or don’t know where to start. The Point The point? What is a Coach? A coach is a professional that establishes relationships with others, guides them, brings out their best, and helps them achieve. Rod Rowland - StageBuddy.com. Rodney Rowland was born in Newport Beach, California, the youngest of four children of a pastor and an aquatics athlete. 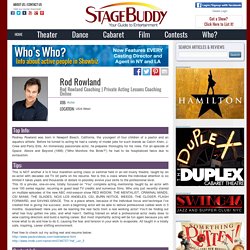 Before he turned to acting he had a variety of model jobs for such brands as Calvin Klein, J. Private Acting Coaching.