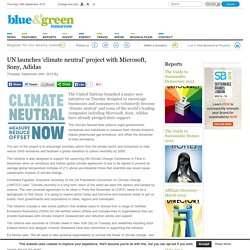 The Climate Neutral Now scheme urges governments, companies and individuals to measure their climate footprint, reduce greenhouse gas emissions, and offset the remainder of their remissions. The aim of the project is to encourage voluntary action from the private sector and consumers to help reduce GHG emissions and facilitate a global transition to carbon neutrality by 2050. The initiative is also designed to support the upcoming UN Climate Change Conference in Paris in December when an ambitious and historic global climate agreement is due to be signed to prevent an average global temperature increase of 2°C above pre-industrial times that scientists say would cause catastrophic impacts of climate change. ISL club Pune City and Adidas announce three-year kit deal. Indian Super League (ISL) franchise FC Pune City today unveiled its home and away kits in the presence of star players Adrian Mutu, Tuncay Sanli, Didier Zokora and Eugeneson Lyngdoh while announcing a three-year partnership with sportswear giant Adidas. 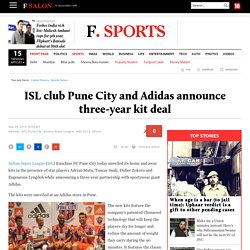 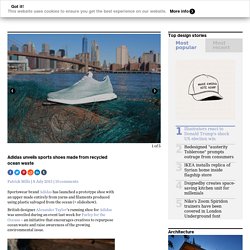 British designer Alexander Taylor's running shoe for Adidas was unveiled during an event last week for Parley for the Oceans – an initiative that encourages creatives to repurpose ocean waste and raise awareness of the growing environmental issue. Taylor constructed the Adidas x Parley shoes using the brand's existing footwear manufacturing process, but replaced the yarns with fibres made from waste plastic and fishing nets.

"This way there is no reason why materials with similar characteristics to those that we use every day with conventional production processes cannot be simply replaced by ocean plastic materials," Taylor told Dezeen. Taylor's design for the trainer places a white upper, patterned with contours of green stitching, on top of Adidas' boost sole. Pro:Direct Soccer - adidas Football Boots, Cleats, adidas adizero RS7, Predator, F50, adiPure. In a first, Adidas gets staff to ‘own and adopt’ its retail outlets; aims at spurring sales. NEW DELHI: On Wednesday some 75 employees of Adidas in India took 'ownership' of one franchisee retail store each in a global first for the German sportswear giant, aimed at spurring sales at a time of slowdown in consumer spends and increasing competition. 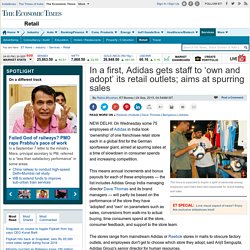 This means annual increments and bonus payouts for each of these employees — the list includes Adidas Group India managing director Dave Thomas and its brand managers — will partly be based on the performance of the store they have 'adopted' and 'own' on parameters such as sales, conversions from walk-ins to actual buying, time consumers spend at the store, consumer feedback, and support to the store team. The stores range from mainstream Adidas or Reebok stores in malls to obscure factory outlets, and employees don't get to choose which store they adopt, said Arijit Sengupta, Adidas Group's senior director for human resources. HR experts said such initiatives are rare in the retail world.

Adidas, Lucozade and Guinness trump official sponsors in Rugby World Cup race. Think The adidas Ultra Boost Is For Summer Only? How adidas Lost Billions By Not Giving LeBron James $3 Million. For the majority of the 1990s and into the early 2000s, adidas had a promising stake in the basketball world. 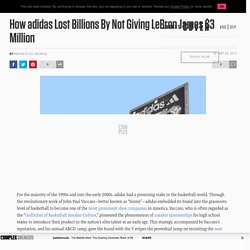 Through the revolutionary work of John Paul Vaccaro—better known as “Sonny”—adidas embedded its brand into the grassroots level of basketball to become one of the most prominent shoe companies in America. Vaccaro, who is often regarded as the “Godfather of Basketball Sneaker Culture,” pioneered the phenomenon of sneaker sponsorships for high school teams to introduce their product to the nation’s elite talent at an early age. Adidas Moves to Address Environmental Worries. Adidas - Adidas Net Worth. Adidas. Adidas was founded on 18 August 1949 by Adolf Dassler, following a family feud at the Gebrüder Dassler Schuhfabrik company between him and his older brother Rudolf.[4] Rudolf had earlier established Puma, which quickly became the business rival of Adidas. 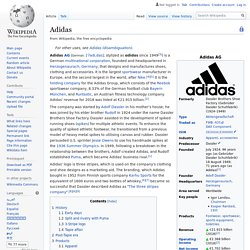 Both the Adidas and Puma companies still remain based in Herzogenaurach, Germany to this day. The company's clothing and shoe designs typically feature three parallel bars, and the same motif is incorporated into Adidas's current official logo.[5][6] The brand name is appropriately uncapitalized, with a lower case "a. "[7] The company revenue for 2012 was listed at €14.88 billion.[2] History[edit] Early days[edit] Christoph Von Wilhelm Dassler was a worker in a shoe factory, while his wife Pauline ran a small laundry in the Bavarian town of Herzogenaurach, 20 km (12.4 mi) from the city of Nuremberg.