Nothing to Hide, The Blurring of the Physical and Temporal Line Between Life, Work and Education. By Mariabruna Fabrizi & Fosco Lucarelli Some years ago an eye-catching tv commercial for Elave, a skincare products company, provoked a rather discernible YouTube backlash. 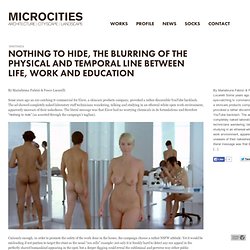 The ad showed completely naked laboratory staff technicians wandering, talking and studying in an ethereal-white open work environment, apparently unaware of their nakedness. The literal message was that Elave had no worrying chemicals in its formulations and therefore “Nothing to hide” (as asserted through the campaign’s tagline). Curiously enough, in order to promote the safety of the work done in the house, the campaign choose a rather NSFW attitude.

Oftentimes Léopold Lambert has claimed the violent nature inherent of architecture. As the symbol of countercultural 1960’s utopia, the exposed, naked body was the most literal expression of the overcoming of Foucault’s disciplinar universe and the so-called “changing of paradigm”. Street Computing: Urban Informatics and City Interfaces. NeoGeography and the nature of geographic expertise - Journal of Location Based Services - Volume 3, Issue 2. NeoGeography has been defined as a blurring of the distinctions between producer, communicator and consumer of geographic information. 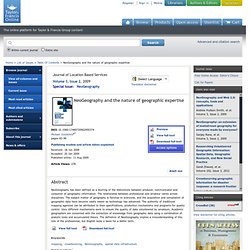 The relationship between professional and amateur varies across disciplines. The subject matter of geography is familiar to everyone, and the acquisition and compilation of geographic data have become vastly easier as technology has advanced. The authority of traditional mapping agencies can be attributed to their specifications, production mechanisms and programs for quality control. Very different mechanisms work to ensure the quality of data volunteered by amateurs. Academic geographers are concerned with the extraction of knowledge from geographic data using a combination of analytic tools and accumulated theory. Keywords Related articles View all related articles. NEOGEOGRAPHY AND THE PALIMPSESTS OF PLACE: WEB 2.0 AND THE CONSTRUCTION OF A VIRTUAL EARTH - GRAHAM - 2010 - Tijdschrift voor economische en sociale geografie.

Chiedi@lla tua biblioteca. The End of Public Space?People's Park, Definitions of the Public, and Democracy - Annals of the Association of American Geographers - Volume 85. The nature of public space in contemporary society is changing. 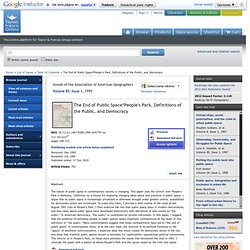 This paper uses the turmoil over People's Park in Berkeley, California, as a means for exploring changing ideas about and practices in public space. I argue that as public space is increasingly privatized or otherwise brought under greater control, possibilities for democratic action are minimized. To make this claim, I provide a brief outline of the roots of the August 1991 riots at People's Park. I then examine the role that public space plays in modern democracies, and how ideas about public space have developed dialectically with definitions of who counts as “the public.” In American democracy, “the public” is constituted by private individuals. Key Words Related articles View all related articles. 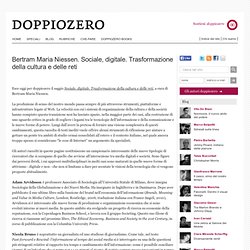 Essay: Architecture and interaction design, via adaptation and hackability. Can products be made hackable, or are all products hackable? 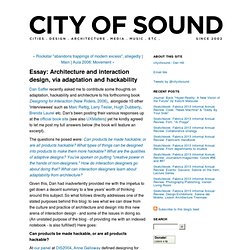 At our panel at DIS2004, Anne Galloway defined designing for hackability as "allowing and encouraging people to make technologies be what they want them to be. " Yet, as the architect Cedric Price might have said," technology is the answer, but what is the question"? Because effectively, all products are hackable. If we define a hackable product as 'a product capable of being modified by its user' then we've seen pretty much everything hacked. That definition is fairly broad, but hacking itself has a long history. But if this definition appears too wide to be useful, it's worth noting the range of products that have been hacked, apparently irrespective of size, solidity, complexity.

Software is incredibly malleable of course, even that which is explicitly designed not to be hacked (cf. operating systems, digital rights management software etc.). What types of things can be designed into products to make them more hackable?