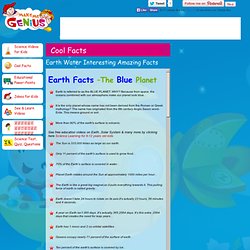 WHY? Because from space, the oceans combined with our atmosphere make our planet look blue. . It is the only planet whose name has not been derived from the Roman or Greek mythology? The name has originated from the 8th century Anglo Saxon word- Erda. More than 80% of the earth's surface is volcanic. The Sun is 333,000 times as large as our earth. Only 11 percent of the earth's surface is used to grow food. . 70% of the Earth’s surface is covered in water. . 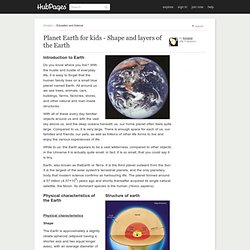 The maximum deviations from this are the highest point on Earth (Mount Everest, which is only 8,850 m) and the lowest (the bottom of the Mariana Trench, at 10,911 m below sea level). The mass of the Earth is approximately 6 x 1024 kg. Structure Geophysical studies have revealed that the Earth has several distinct layers. The next layer is the mantle, which is composed mainly of ferro-magnesium silicates. The last layer is the core, which is separated into the liquid outer core and the solid inner core. The Earth is separated into layers based on mechanical properties in addition to composition. Interior Interior heat The interior of Earth reaches temperatures of 5270 kelvins. Structure Earth's composition (by depth below surface): 0 to 60 km - Lithosphere (locally varies 5-200 km) 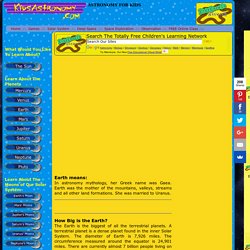 Earth was the mother of the mountains, valleys, streams and all other land formations. She was married to Uranus. How Big is the Earth? The Earth is the biggest of all the terrestrial planets. A terrestrial planet is a dense planet found in the inner Solar System. The Planet Our planet is an oasis of life in an otherwise desolate universe. To learn more about Earth, please visit our Earth Sciences website. Earth. Earth. No Human's. Scientists Discover 'Liveable Planet' video from Answers.

3ed planet. Earth  l  Earth facts, pictures and information. Earth is the third planet from the Sun and the fifth largest: Planet Profile orbit: 149,600,000 km (1.00 AU) from Sundiameter: 12,756.3 kmmass: 5.972e24 kg History of Earth Earth is the only planet whose English name does not derive from Greek/Roman mythology. 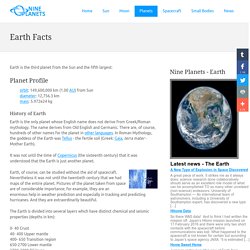 The name derives from Old English and Germanic. It was not until the time of Copernicus (the sixteenth century) that it was understood that the Earth is just another planet. Earth, of course, can be studied without the aid of spacecraft. The Earth is divided into several layers which have distinct chemical and seismic properties (depths in km): 0- 40 Crust 40- 400 Upper mantle 400- 650 Transition region 650-2700 Lower mantle 2700-2890 D'' layer 2890-5150 Outer core 5150-6378 Inner core The crust varies considerably in thickness, it is thinner under the oceans, thicker under the continents.