Ronin Athletics is a New York City based training facility that offers a conducive environment for mma, kickboxing and bjj athletes of all levels develop their combat sport skills.

The Difference Between Coaching and Teaching in MMA. For the longest time, if you were to ask me what I do for a living, I would tell you that “I teach Mixed Martial Arts,” more specifically Brazilian Jiu-Jitsu. 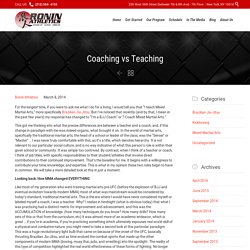 But I’ve noticed that recently (and by that, I mean in the past few years) my response has changed to “I’m a BJJ Coach” or “I Coach Mixed Martial Arts.” This got me thinking into what the precise differences are between a teacher and a coach, and, if this change in paradigm with me was indeed organic, what brought it on.

In the world of martial arts, specifically the traditional martial arts, the head of a school or leader of the class, was the “Sensei” or “Master” … I was never truly comfortable with this, as it’s a title, which denotes hierarchy. It is not relevant to our particular social culture, and is no way indicative of what this person’s role is within their given school or community. It was simply too contrived. Looking back: How MMA changed EVERYTHING Evolving from Students to Athlete, Teacher to Coach. Why Do We Love Watching Martial Arts?

Why do we watch MMA, or for that matter, any combat sport? 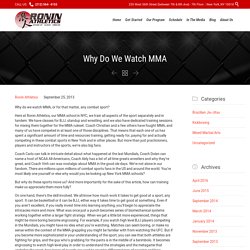 Here at Ronin Athletics, our MMA school in NYC, we train all aspects of the sport separately and in tandem. We have classes for BJJ, standup and wrestling, and we also have dedicated training sessions for mixing them together for the MMA ruleset. Coach Christian and a few others have fought MMA, and many of us have competed in at least one of those disciplines. That means that each one of us has spent a significant amount of time and resources training, getting ready for, paying for and actually competing in these combat sports in New York and in other places. But more than just practicioners, players and instructors of the sports, we’re also big fans. Coach Carlo can talk in intricate detail about what happened at the last Mundials, Coach Dolan can name a host of NCAA All-Americans, Coach Aldy has a list of all time greats wrestlers and why they’re great, and Coach Vinh can wax nostalgic about MMA in the good ole days.

Conversational BJJ: The Key to Effective Training. Rolling, or grappling with resistance, is a crucial part of BJJ’s pedagogical model. 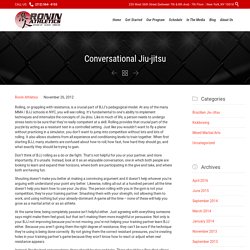 At any of the many MMA / BJJ schools in NYC, you will see rolling. It’s fundamental to one’s ability to implement techniques and internalize the concepts of Jiu-jitsu. Like in much of life, a person needs to undergo stress tests to be sure that they’re really competent at a skill. Rolling provides that crucial part of the puzzle by acting as a resistant test in a controlled setting. Just like you wouldn’t want to fly a plane without practicing in a simulator, you don’t want to jump into competition without lots and lots of rolling. Don’t think of BJJ rolling as a do or die fight. Shouting doesn’t make you better at making a convincing argument and it doesn’t help whoever you’re arguing with understand your point any better. At the same time, being completely passive isn’t helpful either. Instead, like the best conversations, there should be give and take. See you on the mats. New York State and Pro MMA Becoming Legal. Mixed martial arts fights are legal in forty-nine states, with New York being the only state that banned the sport. 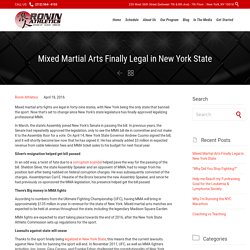 Now that’s set to change since New York’s state legislature has finally approved legalizing professional MMA. In March, the state’s Assembly joined New York’s Senate in passing the bill. In previous years, the Senate had repeatedly approved the legislation, only to see the MMA bill die in committee and not make it to the Assembly floor for a vote. On April 14, New York State Governor Andrew Cuomo signed the bill, and it will shortly become law now that he has signed it. He has already added $3 million in expected revenue from cable television fees and MMA ticket sales to his budget for next fiscal year. Silver’s resignation helped get bill passed In an odd way, a twist of fate due to a corruption scandal helped pave the way for the passing of the bill. There’s Big money in MMA fights Lawsuits against state will cease. "Why Did You Stop Fighting?" Why BJJ Competition is Important? Combat Sports FAQ - The Minor Stuff.

Understanding the Physics Behind Brazilian Jiu-jitsu. BJJ Internet Resources - What You Need to Know. What to Look for Before Picking a Martial Arts School? How Does Competition Make Us Improve As Athletes? Ronin Athletics Training Gym.