Former WCW Star In Critical Condition After Car Crash. Several news sites are reporting that former WCW wrestler Marcus “Buff” Bagwell, 42, has been involved in a car accident which has left him severely injured. 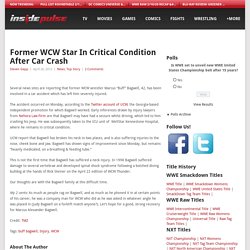 The accident occurred on Monday, according to the Twitter account of UCW, the Georgia-based independent promotion for which Bagwell worked. Early inferences drawn by injury lawyers from Nehora Law Firm are that Bagwell may have had a seizure whilst driving, which led to him crashing his jeep. He was subsequently taken to the ICU unit of WellStar Kennestone Hospital, where he remains in critical condition. UCW report that Bagwell has broken his neck in two places, and is also suffering injuries to the nose, cheek bone and jaw.