VODOUN: History of Persecution part 3. This relentless campaign of maligning and actively suppressing African religions continued throughout the decades by the colonial [and later United States] government. 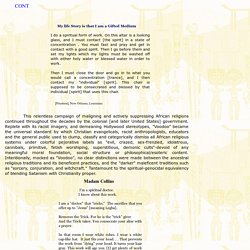 What is mentalising? -  Mentalising. (White Paper: Houston, TX: The Menninger Clinic, 2003)Jon G. Allen, PhD, Efrain Bleiberg, MD, and Tobias Haslam-Hopwood, PsyD This article is based on a patient education program the authors are conducting in the Professionals in Crisis program at The Menninger Clinic. This program is designed to foster a therapeutic alliance by helping patients understand a central aim of treatment, namely, fostering mentalizing, the awareness of mental states in self and others. The educational material is based on research in the Child and Family Program. The educational sessions are conducted like seminars in which the leaders and patients collaborate in understanding these concepts and their application to treatment.

Many persons with serious psychiatric disorders require intensive treatment. Mentalization. In psychology, mentalization is the ability to understand the mental state of oneself and others which underlies overt behaviour.[1] Mentalization can be seen as a form of imaginative mental activity, which allows us to perceive and interpret human behaviour in terms of intentional mental states (e.g. needs, desires, feelings, beliefs, goals, purposes, and reasons).[2][3] Another term that David Wallin has used for mentalization is "Thinking about thinking".[4] While the Theory of Mind has been discussed in philosophy at least since Descartes, the concept of mentalization emerged in psychoanalytic literature in the late 1960s, and became empirically tested in 1983 when Heinz Wimmer and Josef Perner[5] ran the first experiment to investigate when children can understand false belief, inspired by Daniel Dennett's interpretation of a Punch and Judy scene. 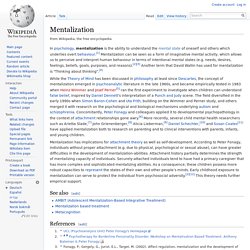 See also[edit] References[edit] Further reading[edit] Apperly, I. (2010). External links[edit] Autism study strengthens idea that we read God's mind - life - 30 May 2012. People with autism appear less likely to believe in God – a discovery that has strengthened theories that religious belief relies on being able to imagine what God is thinking, a capacity known as "mentalising". 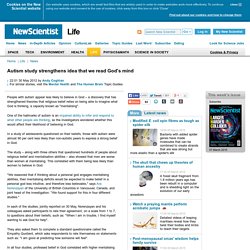 One of the hallmarks of autism is an impaired ability to infer and respond to what other people are thinking, so the investigators wondered whether this would affect their likelihood of believing in God. In a study of adolescents questioned on their beliefs, those with autism were almost 90 per cent less likely than non-autistic peers to express a strong belief in God. The study – along with three others that questioned hundreds of people about religious belief and mentalisation abilities – also showed that men are worse than women at mentalising. This correlated with them being less likely than women to believe in God. In all four studies, professed belief in God correlated with higher mentalising scores. Journal reference: PLoS One, DOI: 10.1371/journal.pone.0036880 Recommended by. 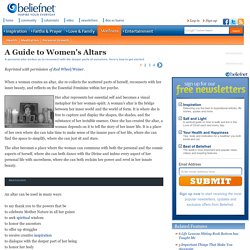 When a woman creates an altar, she re-collects the scattered parts of herself, reconnects with her inner beauty, and reflects on the Essential Feminine within her psyche. Her altar represents her essential self and becomes a visual metaphor for her woman-spirit. A woman's altar is the bridge between her inner world and the world of form. It is where she is free to capture and display the shapes, the shades, and the substance of her invisible essence. Bless. Manifest. Divine. Spirit. Disciplining Your Mind to Become Better at Manifesting. A key to the intention-manifestation model is that you must keep your thoughts focused on what you want and avoid thinking about what you don’t want. 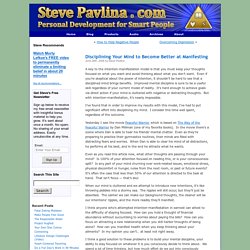 Even if you’re skeptical about the power of intention, it shouldn’t be hard to see that a disciplined mind brings benefits. Improved mental discipline is sure to be a useful skill regardless of your current model of reality. It’s hard enough to achieve goals via direct action if your mind is cluttered with negative or distracting thoughts. The Magical Manifesting Mind. Transmission Excerpt from The Reconnections....... 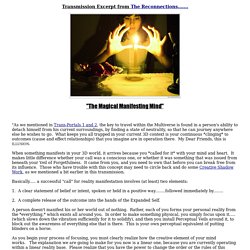 "The Magical Manifesting Mind" "As we mentioned in Trans-Portals 1 and 2, the key to travel within the Multiverse is found in a person's ability to detach himself from his current surroundings, by finding a state of neutrality, so that he can journey anywhere else he wishes to go. What keeps you all trapped in your current 3D context is your continuous *clinging* to outcomes (cause and effect relationships) that you imagine are in operation there. What is Voodoo? Understanding a Misunderstood Religion  Editors Note: While this article uses the AP Style spelling, 'Vodou' is considered a more appropriate spelling by the author and other scholars. 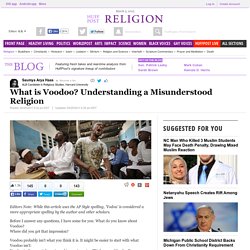 Before I answer any questions, I have some for you: What do you know about Voodoo? Where did you get that impression? Voodoo probably isn't what you think it is. It might be easier to start with what Voodoo isn't: Voodoo isn't accurately portrayed in most movies, TV shows and books. Voodoo: Principles, History & Gods. Oya or Yansa, Aida-Lenso, Olla. 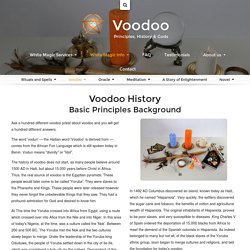