Most cops say marijuana laws should be relaxed. A Pew Research Center survey of nearly 8,000 police officers finds that more than two-thirds of them say that marijuana use should be legal for either personal or medical use. 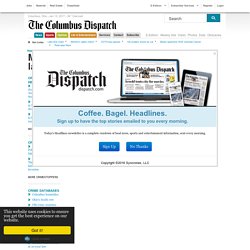 The nationally representative survey of law enforcement, one of the largest of its kind, found that 32 percent of police officers said marijuana should be legal for medical and recreational use, while 37 percent said it should be legal for medical use only. Another 30 percent said that marijuana should not be legal at all. Police are more conservative than the general public on the issue. Among all Americans, Pew found that 49 percent supported recreational marijuana, 35 percent supported medical marijuana only, and 15 percent said the drug should not be legal. Pew also found a generational divide among cops on the marijuana issue, although not as large as the one that exists among the general public.

Law enforcement groups have often been among the staunchest opponents of marijuana legalization measures. Woman, denied abortion while in jail, sues Tennessee sheriff. Case files: Inmate access to abortions Court rulings in several states have created a patchwork when it comes to what jail and prison administrators are required to do when a woman inmate requests an abortion. 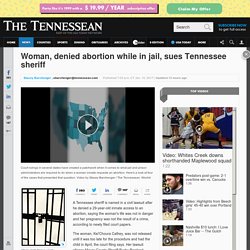 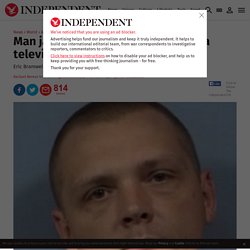 Eric Bramwell was found guilty in November and sentenced in January to 22 years imprisonment. Indian police accused of mass rape during operation. India's human rights watchdog said more than a dozen tribal women were raped by police in restive Chhattisgarh state with the victims' lawyer slamming authorities over delays in arresting the accused. 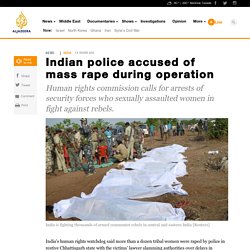 The National Human Rights Commission (NHRC) said on Sunday at least 16 women were "victims of rape, sexual and physical assault" after it concluded an investigation into reports that police attacked several villages in Bijapur district in the central Indian state during an operation against communist rebels in October 2015. "Prima-facie, human rights of the victims have been grossly violated by the security personnel of the government of Chhattisgarh, for which the state government is vicariously liable," the government commission said in a statement. 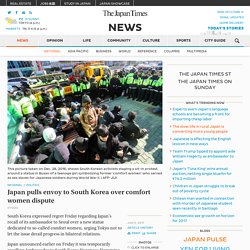 Japan announced earlier on Friday it was temporarily recalling Ambassador to South Korea Yasumasa Nagamine in protest over the erection last week of the statue outside the Japanese consulate in the country’s southern port city of Busan. The ministry spokesman said in the statement that even if there are difficult issues, the two governments must continue to foster bilateral relations based on trust. Japan has called for the immediate removal of the statue, which features a barefooted young girl sitting on a chair, representing women procured for the Japanese military’s wartime brothels before and during World War II.

A similar statue was erected outside the Japanese Embassy in Seoul in 2011. Irish leader doesn’t regret calling Trump “racist and dangerous” In the run-up to Election 2016, Taoiseach Enda Kenny called Donald Trump “a racist and a bigot” on the floor of the Irish parliament. 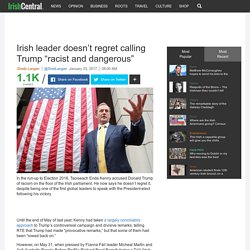 RollingNews.ie In the run-up to Election 2016, Taoiseach Enda Kenny accused Donald Trump of racism on the floor of the Irish parliament. He now says he doesn’t regret it, despite being one of the first global leaders to speak with the President-elect following his victory. Cannabis ingredient to be classed as medicine in UK. Products that contain a cannabis-based ingredient called cannabidiol, or CBD, are to be classed as medicines by the UK medicines regulator from this year. 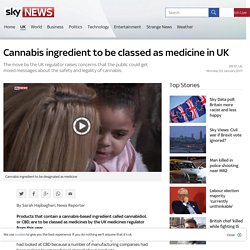 The Medicines & Healthcare products Regulatory Agency (MHRA) said it had looked at CBD because a number of manufacturing companies had been making "overt medicinal claims" about products. Gerald Heddel, director of inspection and enforcement at the agency, told Sky News: "The change really came about with us offering an opinion that CBD is in fact a medicine, and that opinion was based on the fact that we noted that people were making some quite stark claims about serious diseases that could be treated with CBD. " He said that a review of the evidence showed that "it was clear that people are using this product with the understandable belief that it will actually help".

Cannabis has two key ingredients - THC and CBD. The THC gets you stoned, and it can also make you anxious and psychotic. China upset at name change of de facto Japan embassy in Taiwan. Kim Jong Un orders North Koreans to celebrate his grandmother on Christmas. U.S., Canada ban offshore drilling in Arctic waters. President Barack Obama on Tuesday designated the bulk of U.S. 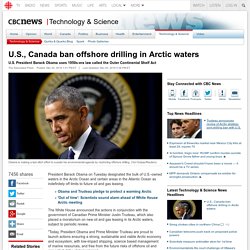 -owned waters in the Arctic Ocean and certain areas in the Atlantic Ocean as indefinitely off limits to future oil and gas leasing. The White House announced the actions in conjunction with the government of Canadian Prime Minister Justin Trudeau, which also placed a moratorium on new oil and gas leasing in its Arctic waters, subject to periodic review. "Today, President Obama and Prime Minister Trudeau are proud to launch actions ensuring a strong, sustainable and viable Arctic economy and ecosystem, with low-impact shipping, science based management of marine resources, and free from the future risks of offshore oil and gas activity," the statement read. U.S. President Barack Obama is designating the bulk of U.S. The move helps put some finishing touches on Obama's environmental legacy while also testing president-elect Donald Trump's promise to unleash the nation's untapped energy reserves. Russian ambassador to Ankara Andrey Karlov dies after gun attack.

Russian Ambassador to Ankara Andrey Karlov was killed on Monday following an attack by an unidentified gunman during the opening of an art exhibition in the Turkish capital. 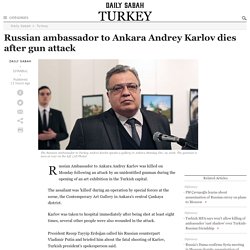 The assailant was 'killed' during an operation by special forces at the scene, the Contemporary Art Gallery in Ankara's central Çankaya district. Karlov was taken to hospital immediately after being shot at least eight times, several other people were also wounded in the attack. President Recep Tayyip Erdoğan called his Russian counterpart Vladimir Putin and briefed him about the fatal shooting of Karlov, Turkish president's spokesperson said. Russian officials initially said that the attack was carried out by a radical extremist.

The Russian Foreign Ministry spokesperson said following the death of Karlov that the country considers the attack as a "terrorist act. " 8 of 10 Filipinos fear getting killed in drug war. About 85 percent of Filipinos are ‘satisfied’ with the antidrug campaign of the Duterte administration despite 78 percent of them fearing that they could fall victim to extrajudicial killing. 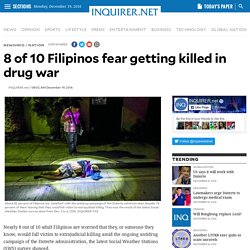 That was the result of the latest Social Weather Station survey done from Dec. 3 to 6, 2016. INQUIRER FILE Nearly 8 out of 10 adult Filipinos are worried that they, or someone they know, would fall victim to extrajudicial killing amid the ongoing antidrug campaign of the Duterte administration, the latest Social Weather Stations (SWS) survey showed. A black woman was accused of stealing — so this Victoria’s Secret kicked out all black customers. At first there was outrage. Kimberly Houzah told everyone watching her Facebook Live video to boycott Victoria’s Secret.

She pledged to call the store’s corporate headquarters and report the racist behavior she’d just been subjected to. DVD-based Clean Room for PGP and PKI. There is increasing interest in computer security these days and more and more people are using some form of PKI, whether it is signing Git tags, signing packages for a GNU/Linux distribution or just signing your emails. There are also more home networks and small offices who require their own in-house Certificate Authority (CA) to issue TLS certificates for VPN users (e.g.

StrongSWAN) or IP telephony. Back in April, I started discussing the PGP Clean Room idea (debian-devel discussion and gnupg-users discussion), created a wiki page and started development of a script to build the clean room ISO using live-build on Debian. Keeping the master keys completely offline and putting subkeys onto smart cards and other devices dramatically lowers the risk of mistakes and security breaches. Facebook, WhatsApp cookies: Why the fight over your data privacy is far from over. A ruling to protect German WhatsApp users' data from Facebook suggests that the EU bloc will not back down on protecting consumers' data privacy, despite an earlier win by Facebook in a Belgian appeal case.

This summer, the Brussels Court of Appeals decided to reverse an earlier ruling restricting Facebook from tracking non-Facebook users in Belgium through the use of cookies. The new ruling means Facebook is again allowed to place cookies on the computers of non-Facebook users. It might seem that Facebook's win shows that European courts have little power in policing the digital privacy rights of their citizens in the face of large tech companies. But the Belgian and European privacy regulators continue to defend their strict consumer data-privacy rules against large tech companies. Iranian child bride to be put to death after giving birth to stillborn baby. A child bride is facing execution for the murder of her husband after giving birth to a stillborn baby in prison. Zeinab Sokian was sentenced to death in 2012 when she just 17 for allegedly murdering her husband in her village in northern Iran.

Under Iranian law, murder carries the death penalty but pregnant women cannot be executed. Play Video Close This is a modal window. Syrian refugees capture terrorism suspect and hand him over to German police. A Syrian refugee suspected of planning a terrorist attack in Germany on behalf of Islamic State was captured by police early Monday in the eastern city of Leipzig after another Syrian lured him to an apartment, tied him up with the help of other refugees and turned him over to police. Jaber Albakr, a 22-year-old refugee, had been on the run and the subject of a nationwide manhunt since Saturday, when he fled an apartment in Chemnitz, near the Czech border, just as police stormed it. Paedophile caught with 137,000 indecent pictures of children spared jail so he can start family. Google Chrome without Google - The Geek Info. Mall of America takes bold stand by closing on Thanksgiving. The nation’s biggest mall has drawn a line in the sand when it comes to opening on Thanksgiving Day.

7 Tips to Secure your Business Travel with your VPN. Data Protection: 3 Ways to Avoid Losing Your Data. Top 7 Benefits of Modern Technology. Testing your mobile security. Anywhere and everywhere we go we always bring our mobile phone. How to be Anonymous Online? For some reasons, we think about going anonymous while surfing online. Tech Security Tips about Encryption. 8 Tips on How You Can Avoid Tax Fraud With a VPN. VPN: A beginner’s Guide. 9 Internet Security Tips for Small Business. Top 7 Tips for Your Android Security. There are times when people get to asked me if android phones are secure to use especially with mobile transactions and sending sensitive data using the internet. FrootVPN Improvements: UK VPN Server is Officially Here! Internet security software FrootVPN is making its way of giving more and more vpn servers for their subscribers. They started providing the best vpn service since 2014 and made awesome advancement as the years go by.

FrootVPN: United Kingdom VPN Server is Now Available! 4 Tips on How to Stay Secured at Any Conference. Top 6 Social Media Tips for Small Businesses. The 8 Advantages of Using a VPN Service. 4 Tips to Keep your Information Secure During the Holidays. 12 Tips on How to Protect Your Data During Mobile Banking. 4 Simple ways to Improve your Internet Security. Which VPN Services Take Your Anonymity Seriously? 2016 Edition. Why Do We Need a VPN? 4 SEO Tips on How You Can Upgrade Your Campaign this Spring 2016. Never post these 7 Things on Social Media. Tips and Ideas on How to Get Started with your Newly-Purchased VPN. Tech News: Open Netware Launched “Privacy on Top” FrootVPN’s newest Canadian Servers. FrootVPN: The Latest Kid on the VPN Block.