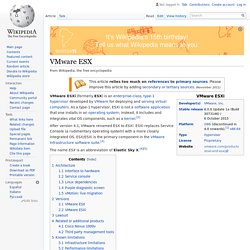 ESXi replaces Service Console (a rudimentary operating system) with a more closely integrated OS. ESX/ESXi is the primary component in the VMware Infrastructure software suite.[3] The name ESX is an abbreviation of Elastic Sky X.[4][5] Architecture[edit] ESX runs on bare metal (without running an operating system)[6] unlike other VMware products.[7] It includes its own kernel: A Linux kernel is started first,[8] and is then used to load a variety of specialized virtualization components, including ESX, which is otherwise known as the vmkernel component. The vmkernel is a microkernel[10] with three interfaces: hardware, guest systems, and the service console (Console OS). Interface to hardware[edit] The vmkernel handles CPU and memory directly, using scan-before-execution (SBE) to handle special or privileged CPU instructions[11][12] and the SRAT (system resource allocation table) to track allocated memory.[13] 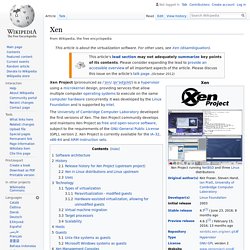 It was developed by the Linux Foundation and is supported by Intel. The University of Cambridge Computer Laboratory developed the first versions of Xen. The Xen Project community develops and maintains Xen Project as free and open-source software, subject to the requirements of the GNU General Public License (GPL), version 2. Xen Project is currently available for the IA-32, x86-64 and ARM instruction sets.

Software architecture[edit] Xen Project runs in a more privileged CPU state than any other software on the machine. Responsibilities of the hypervisor include memory management and CPU scheduling of all virtual machines ("domains"), and for launching the most privileged domain ("dom0") - the only virtual machine which by default has direct access to hardware. 2013 Homelab refresh. Preamble It’s now 2013, and it’s time to have a peak at my homelab refresh for this year. 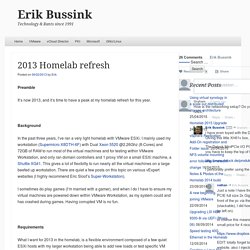 Background In the past three years, I’ve ran a very light homelab with VMware ESXi. I mainly used my workstation (Supermicro X8DTH-6F) with Dual Xeon 5520 @2.26Ghz (8-Cores) and 72GB of RAM to run most of the virtual machines and for testing within VMware Workstation, and only ran domain controllers and 1 proxy VM on a small ESXi machine, a Shuttle XG41. This gives a lot of flexibilty to run nearly all the virtual machines on a large beefed up workstation. I sometimes do play games (I’m married with a gamer), and when I do I have to ensure my virtual machines are powered down within VMware Workstation, as my system could and has crashed during games.

Requirements What I want for 2013 in the homelab, is a flexible environment composed of a few quiet ESXi hosts with my larger workstation being able to add new loads or test specific VM configuration. What to consider before virtualizing mission-critical applications. In IT, many users have abandoned physical servers and traveled far down the virtualization road. 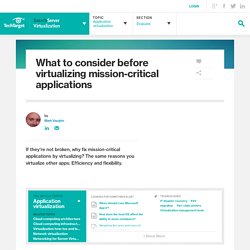 As virtualization has moved from the trendy minority to the trusted majority, those who have resisted it are considered dinosaurs clinging to yesterday's practices. But one has to ask, "Are they resisting the inevitable or simply protecting their business? " When the ability to conduct business is on the line, IT departments exercise an abundance of caution. For some, the prospect of virtualizing mission-critical applications has been considered off-limits because, frankly, why fix what isn't broken? But over the past few years, this mentality about virtualizing critical applications has shifted. 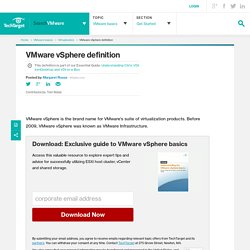 Before 2009, VMware vSphere was known as VMware Infrastructure. By submitting your email address, you agree to receive emails regarding relevant topic offers from TechTarget and its partners. You can withdraw your consent at any time. Contact TechTarget at 275 Grove Street, Newton, MA. You also agree that your personal information may be transferred and processed in the United States, and that you have read and agree to the Terms of Use and the Privacy Policy.