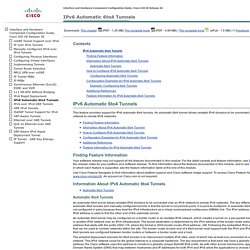 The key difference between automatic 6to4 tunnels and manually configured tunnels is that the tunnel is not point-to-point; it is point-to-multipoint. In automatic 6to4 tunnels, routers are not configured in pairs because they treat the IPv4 infrastructure as a virtual nonbroadcast multiaccess (NBMA) link. The IPv4 address embedded in the IPv6 address is used to find the other end of the automatic tunnel. IPv6 works on 3550s. I was able to get IPv6 to work on my 3550's. 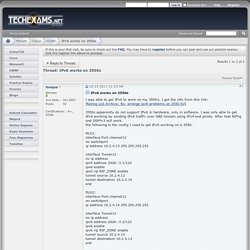 I got the info from this link: Mailing List Archive: Re: strange ipv6 problems on 3550 SVI3550s apparently do not support IPv6 in hardware, only in software. I was only able to get IPv6 working by sending IPv6 traffic over GRE tunnels using IPv4 end points. Virtual Support Day Best Practices Virtual Networking June 2012. Configuring VMDirectPath I/O pass-through devices on a VMware ESX or VMware ESXi host. PCI Passthrough with PCIe devices behind a non-ACS switch in vSphere. Configuring a GRE Tunnel over IPsec with OSPF. Introduction. 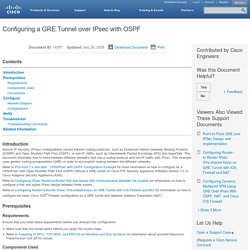 Difference between GRE and IPSEC.. - 23243. I would say GRE over IPSEC is the correct terminology. 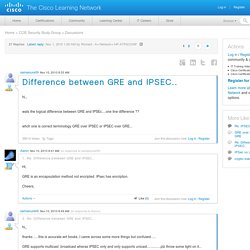 The term IPSEC over GRE is really GRE over IPSEC or "transport mode". The question is which one appears as the "outer" header. Lets take the case of a simple GRE tunnel. You have IP over GRE. Where the original IP header is encapsulated into GRE. In the case of GRE over IPSEC, you actually have two different modes, "Tunnel Mode" and "Transport Mode". 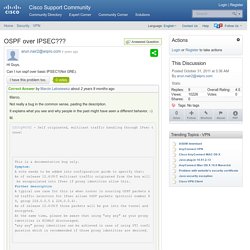 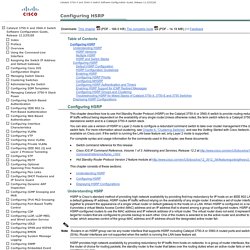 You can also use a version of HSRP in Layer 2 mode to configure a redundant command switch to take over cluster management if the cluster command switch fails. For more information about clustering, see Chapter 6, “Clustering Switches” and see the Getting Started with Cisco Network Assistant , available on Cisco.com.

If the switch is running the LAN base feature set, only Layer 2 mode is supported. vCloud Air Documentation Center. Configuring a Virtual Tunnel Interface with IP Security  [IPSec Negotiation/IKE Protocols] This document provides a sample configuration for a virtual tunnel interface (VTI) with IP Security (IPSec). 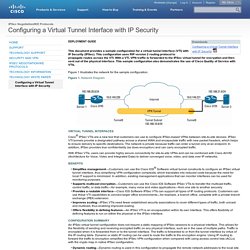 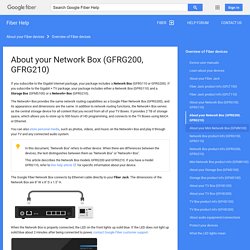 If you subscribe to the Gigabit + TV package, your package includes either a Network Box (GFRG110) and a Storage Box (GFMS100) or a Network+ Box (GFRG210). The Network+ Box provides the same network routing capabilities as a Google Fiber Network Box (GFRG200), and its appearance and dimensions are the same. In addition to network routing functions, the Network+ Box serves as the central storage device for all content that you record from all of your TV Boxes. It provides 2 TB of storage space, which allows you to store up to 500 hours of HD programming, and connects to the TV Boxes using MoCA or Ethernet. You can also store personal media, such as photos, videos, and music on the Network+ Box and play it through your TV and any connected audio system.

In this document, "Network Box" refers to either device. This article describes the Network Box models GFRG200 and GFRG210. About static IPs for small business - Fiber Help. Static IP addresses An Internet Protocol (IP) address is a unique number assigned to each computer on a network. 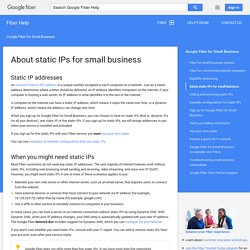 Just as a street address determines where a letter should be delivered, an IP address identifies computers on the Internet. If your computer is hosting a web server, its IP address is what identifies it to the rest of the Internet. Chapter 6: How IPSec Complements MPLS. When the idea of MPLS VPNs was first discussed, there was a strong notion of competition between MPLS VPNs and IPsec VPNs. 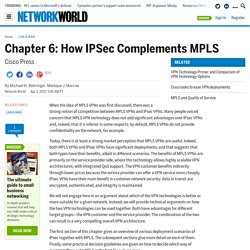 Many people voiced concern that MPLS VPN technology does not add significant advantages over IPsec VPNs and, indeed, that it is inferior in some respects: by default, MPLS VPNs do not provide confidentiality on the network, for example. Today, there is at least a strong market perception that MPLS VPNs are useful. Cisco IOS VPN Configuration Guide - Site-to-Site and Extranet VPN Business Scenarios [Cisco 7200 Series Routers]

Running OSPF across a PIX/ASA firewall: TTL details. Sharath Samanth has recently asked an interesting question: I have seen the post on running OSPF across a PIX firewall. Since I did not have a PIX, I tested the solution by replacing PIX with a router.I had configured the neighbor statements on both routers, but the OSPF was failing to come up. About your Network Box (GFRG100, GFRG110) - Fiber Help. The Google Fiber Network Box (GFRG110 or GFRG100) connects by Ethernet cable directly to your Fiber Jack. Its dimensions are 7.5" W x 7.5" D x 1.6" H. When it is properly connected, the LED on the front of the Network Box lights up solid blue.

If the LED does not light up solid blue about 2 minutes after being connected to power, contact Google Fiber customer support. PA-POS-OC3 Port Adapter Installation and Configuration - Overview: PA-POS-OC3 Port Adapter Installation and Configuration [Cisco Port Adapters] Identifying Interface Addresses This section describes how to identify the interface address for the PA-POS-OC3 in supported platforms. Interface addresses specify the actual physical location of each interface on a router or switch.

10 things you shouldn't virtualize. Virtualization provides a solid core of benefits — cost savings, system consolidation, better use of resources, and improved administrative capabilities — but it's important to remember that supporting the goals of the business are the reason IT departments exist in the first place. Virtualizing everything as far as the eye can see without analyzing the consequences is like what comedian Chris Rock said about driving a car with your feet: You can do it, but that doesn't make it a good idea. The first step in any virtualization strategy should involve envisioning disaster recovery if you put all your eggs in the proverbial basket.

Picture how you would need to proceed if your entire environment were down — network devices, Active Directory domain controllers, email servers, etc. UniFi AP AC Lite QSG. UTM Support of virtualization. This article provides information applicable to the virtualization platforms that are supported by the Sophos UTM line of products. Supported platforms are those that have been tested by our review teams and have been confirmed to work. Applies to the following Sophos product Sophos UTM Software Appliance v9.0 Supported Virtualization Platforms Virtual appliances provide the same functionality as the standard UTM hardware platform.

UTM v9 can be installed within virtual environments, such as: Efficient Server Virtualization with VMware vSphere. Reduce IT complexity and cost, and increase reliability and flexibility with Dell and VMware virtualization solutions. End-to-end services and solutions. Get the benefit of integrated solutions that extend from the desktop to the data center to the cloud. You can depend on the Dell as your one-stop-shop for infrastructure, support and service for VMware virtualization solutions. Use your own router - Fiber Help. Google Fiber service includes a Network Box. IP VPN vs MPLS: Top 5 Factors to Consider. In comparing IP VPN vs MPLS, there are significant differences are in service qualities and the question of who manages and has visibility into the network for remote locations or wireless backhaul. The two terms — IP Virtual Private Networks and Multi-Protocol Label Switching — are often used without regard for any underlying differences — but at the same time, MPLS has become such an integral part of networks that the comparison isn’t exactly apples-to-apples.

“IP VPNs and MPLS are sort of interchangeable in most people’s minds,” said Mike Rouleau, senior vice president of strategy and business development for TW Telecom, the third largest U.S. provider of Carrier Ethernet services. “Unfortunately, in the in industry we tend to use the terms interchangeably, and they’re really not.” “You really start getting into semantics,” he said. “MPLS really has become the universal platform on which all these other services ride. Flexibility is one. TR InstantPerformance.

If you are looking for software you can purchase and plug in, you should take a look at Duo Security. Question #129223 : Questions : Odoo Server (MOVED TO GITHUB) Untitled.