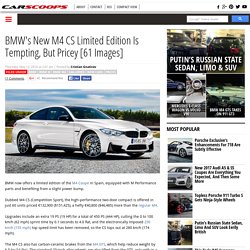 Manhart Fits M235i With MH2 400 Widebody Kit. In case you thought the BMW M235i was nowhere near as aggressive-looking as you wanted it to be, this widebody kit from Manhart should do the trick. 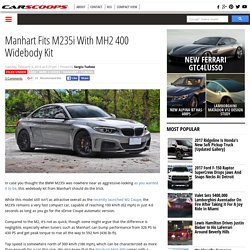 While this model still isn't as attractive overall as the recently launched M2 Coupe, the M235i remains a very fast compact car, capable of reaching 100 km/h (62 mph) in just 4.6 seconds as long as you go for the xDrive Coupe automatic version. Compared to the M2, it's not as quick, though some might argue that the difference is negligible, especially when tuners such as Manhart can bump performance from 326 PS to 430 PS and get peak torque to rise all the way to 592 Nm (436 lb-ft).

Top speed is somewhere north of 300 km/h (186 mph), which can be characterized as more than enough for a car this size. Labs. Owner Takes Delivery Of New BMW M2 In Alpine White. It may not compare to having a brand new supercar delivered to your home, but BMW's spanking new M2 has everything a driving enthusiast needs. 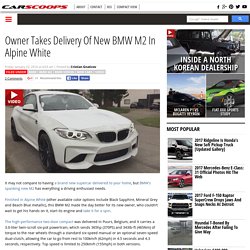 Finished in Alpine White (other available color options include Black Sapphire, Mineral Grey and Beach Blue metallic), this BMW M2 made the day better for its new owner, who couldn’t wait to get his hands on it, start its engine and take it for a spin. The high-performance two-door compact was delivered in Puurs, Belgium, and it carries a 3.0-liter twin-scroll six-pot powertrain, which sends 365hp (370PS) and 343lb-ft (465Nm) of torque to the rear wheels through a standard six-speed manual or an optional seven-speed dual-clutch, allowing the car to go from rest to 100km/h (62mph) in 4.5 seconds and 4.3 seconds, respectively. Top speed is limited to 250km/h (155mph) in both versions. Russians Cause Mayhem In Drifting BMW 1M. While not as powerful or fast as the E92-generation BMW M3, the 1M Coupe is one of the most focused drivers cars launched by the German automaker in recent years. 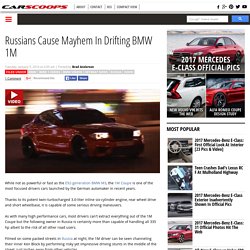 Thanks to its potent twin-turbocharged 3.0-liter inline six-cylinder engine, rear wheel drive and short wheelbase, it is capable of some serious driving maneuvers. As with many high performance cars, most drivers can't extract everything out of the 1M Coupe but the following owner in Russia is certainly more than capable of handling all 335 hp albeit to the risk of all other road users. Filmed on some packed streets in Russia at night, the 1M driver can be seen channeling their inner Ken Block by performing risky yet impressive driving stunts in the middle of the street, just inches away from other vehicles.

Much of the high-paced clip shows the car sliding and speeding through traffic. While we admire the driver's car control, these stunts should be reserved for a racetrack. Here's Another Distinguished BMW M4 For Your Viewing Pleasure. The concept for the BMW M4 is pretty straight forward, it's a precision tool for those looking to drive the ultimate high-performance sports car. 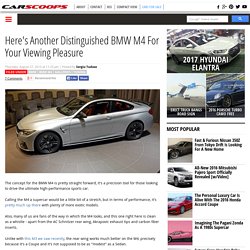 Calling the M4 a supercar would be a little bit of a stretch, but in terms of performance, it's pretty much up there with plenty of more exotic models. Also, many of us are fans of the way in which the M4 looks, and this one right here is clean as a whistle - apart from the AC Schnitzer rear wing, Akrapovic exhaust tips and carbon fiber inserts. Carlex Design Leaves Its Touch on This BMW 4 Series. This white 4 Series convertible may look inconspicuous, but wait until you see the interior. 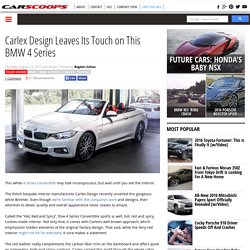 The Polish bespoke interior manufacturer Carlex Design recently unveiled this gorgeous white Bimmer. Even though we’re familiar with the company's work and designs, their attention to detail, quality and overall appearance never ceases to amaze. Called the “Hot, Red and Spicy”, thiw 4 Series Convertible sports a, well, hot, red and spicy, custom-made interior. Not only that, it comes with Carlex’s well known approach, which emphasizes hidden elements of the original factory-design. BMW M4 Widebody by Varis. After Vorsteiner unveiled their widebody kit for the new BMW M3, another tuning shop, Varis, builds a bold and wide design for the popular sportscar. 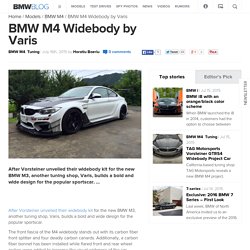 The front fascia of the M4 widebody stands out with its carbon fiber front splitter and four deadly carbon canards. Additionally, a carbon fiber bonnet has been installed while flared front and rear wheel arches were added to increase the visual wideness of the car. Further modifications include new front and rear quarters panels, a set of black five-spoke wheels, a new rear diffuser and a racing rear wing made by Studie Japan. No details were shared on a power upgrade for this mean looking machine. [Source: GTSpirit] Lumma Design Presents Ultra-Aggressive F16 BMW X6. Called the Lumma CLR X 6 R, this muscular Sports Activity Coupe will shock you with more than just its looks. 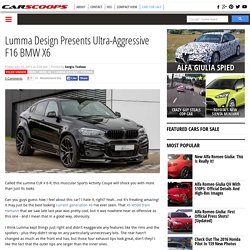 Can you guys guess how I feel about this car? I hate it, right? Yeah...no! It's freaking amazing! It may just be the best looking current generation X6 I've ever seen. I think Lumma kept things just right and didn't exaggerate any features like the rims and the spoilers - plus they didn't strap on any particularly unnecessary bits. Overall , you can also make out a custom front spoiler, the blacked out grille, a trunk lid spoiler and the lower ride height. In terms of performance, Lumma will raise the power output of your xDrive50i from 450 PS and 650 Nm (480 lb-ft) to 555 PS and 792 Nm (585 lb-ft). Keep in mind that the stock xDrive50i is roughly 100 kg (220 lbs) lighter than the X6 M. BMW M Power - Driving pleasure captured on film: The BMW M235i Coupe at the “Drift Mob” shoot in Cape Town. [1] BMW DrivingExperience : Home. BMW M Initiation. BMW M4 Exhaust Battle: Hamann vs Akrapovic vs Stock.

This Fake BMW 1M Has a Big V8 Secret Under the Hood. A BMW F10 M5 30 Jahre Edition Compared With A BMW F82 M4. BMW Launches M Laptimer App for the iPhone. BMW is convinced that extra technology can always help drivers improve their track performance. 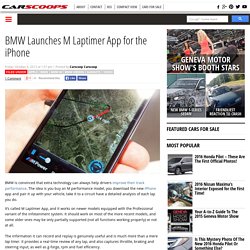 The idea is you buy an M performance model, you download the new iPhone app and pair it up with your vehicle, take it to a circuit have a detailed analysis of each lap you do. It’s called M Laptimer App, and it works on newer models equipped with the Professional variant of the infotainment system. It should work on most of the more recent models, and some older ones may be only partially supported (not all functions working properly) or not at all.

The information it can record and replay is genuinely useful and is much more than a mere lap timer. It provides a real-time review of any lap, and also captures throttle, braking and steering input, as well as g-forge, rpm and fuel efficiency. 2013 Essen Motor Show: BMW 1M in Chrome and Green. One car that draws attention on the road is the limited-edition BMW 1M. 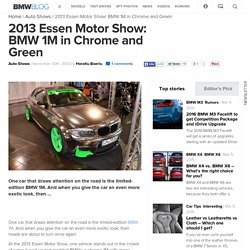 And when you give the car an even more exotic look, then heads are about to turn once again. At the 2013 Essen Motor Show, one vehicle stands out in the crowd of super tuned up and modded BMWs: a chrome 1M with green accents. The fellows at Oxigin/Tuningpur draw attention with the chrome wrapped 1M which comes with neon green elements at the front and rear aprons, side gills and wheels. The coloring choice has only one goal: to draw as much attention as possible, and that task it’s even easier when you use the fan’s favorite 1M as a starting point. Here is a photo gallery that gives us a closer look at this chrome green 1M, and also a closer look at our own 1M. [Source: Bimmertoday] WorldCarFans - Photos du journal. Cool looking BMW 1M. The folks at Autogespot have spotted a sexy-looking BMW 1M Coupe wrapped around in matte gray and modded tastefully. Based on the images below, the 1M comes with the sporty and loud Akrapovic Exhust System, carbon fiber trunk lip, carbon fiber rear diffuser and brake calipers finished in fluorescent green.

A set of blacked out ADV1. wheels were fitted to the car giving the 1M an overall aggressive look, one that the 1M certainly doesn’t fall short of. 6331 1M units were sold worldwide with 740 of them in the United States. In standard form, the 1M came painted in only three colors, Valencia Orange, Alpine White and Black Sapphire. At the end of the production, some special units were produced, like this Java Green 1M. BMW 435i M Sport Wearing a Full Suite of M Performance Parts. From the same BMW showroom in Abu Dhabi that brought us the colorful M135i hatch, comes this 435i M Sport Coupe with added touches of…sportiness from the brand's M Performance arm. The Glacier Silver Metallic coupe (unless the camera is fooling us and it’s the Individual Moonstone Metallic) has all sorts of optional M Performance parts such as the front lip and boot lid spoilers made from carbon fiber, side skirts, a bespoke rear diffuser, carbon fiber mirror caps and black kidney grilles.

Steve Sutcliffe Tests Past and Present BMW M3s to Find Best Recipe for the 2014 Model. Oh, the lengths motoring journalists will go to in order to hit the track on the driver’s seat of a rear-wheel drive car. Then again, it’s all part of the job and to be frank, no one aspires to the profession in order to test Chinese compact cars… Autocar magazine editor Steve Sutcliffe at least had a good excuse, though, for gathering three examples of BMW’s M-division finest on the Brands Hatch circuit. M GmbH.