2016 Audi A4 Avant Gets Punchier With B&B's Upgrades. One of the first tuning companies to take on the latest Audi A4 Avant is called B&B Automobiltechnik and offers a series of visual and performance upgrades for the estate. 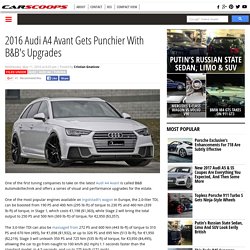 Audi shared a new set of photos showing the daddy of A3s, the 362hp RS3. 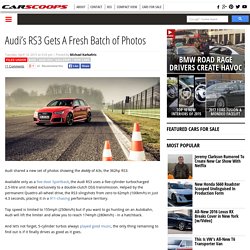 Available only as a five-door Sportback, the Audi RS3 uses a five-cylinder turbocharged 2.5-litre unit mated exclusively to a double-clutch DSG transmission. Helped by the permanent Quattro all-wheel drive, the RS3 slingshots from zero to 62mph (100km/h) in just 4.3 seconds, placing it in a 911-chasing performance territory. Top speed is limited to 155mph (250km/h) but if you want to go hunting on an Autobahn, Audi will lift the limiter and allow you to reach 174mph (280km/h) - in a hatchback. And let’s not forget, 5-cylinder turbos always played good music, the only thing remaining to find out is if it finally drives as good as it goes.

The 2015 Audi S3 meets its match on wild mountain roads. If you're looking for a road to nowhere in particular, you can hardly do better than Route 165 toward Carbonado, Washington. 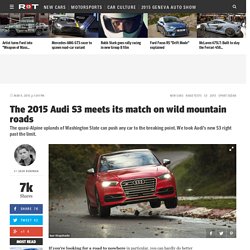 The narrow two-lane flirts with the Carbon River for a few miles before vanishing into Mount Rainier National Park. The road grows tighter, hugging canyon walls that were cut by the river below over eons. The S3 is nervous over the uneven pavement, skipping and bouncing across bumps and dips. Seattle and the surrounding country is an oil painting in earth tones, a world hung in muted greens, blues, and browns. The S3 fits in like a firecracker, its blister-red paint shouting at the wan clouds in an inanimate act of madness. I'm here because the Pacific Northwest is unlike anywhere else in the country.

One part sedan, one part marble launcher. This is a harder version of Audi's A3. WorldCarFans - Photos du journal. Is the 2014 Audi RS4 with Straight Pipes Europe’s Best Sounding V8? Having eight cylinders placed in a vee formation is usually something that is thought of as being an American tradition, but the Europeans do it well too, and have been doing so for decades. 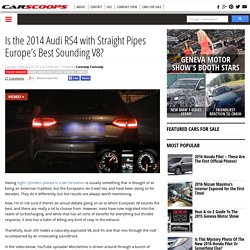 They do it differently, but the results are always worth mentioning. Now, I'm m not sure if there’s an actual debate going on as to which Euorpean V8 sounds the best, and there are really a lot to choose from. However, most have now migrated into the realm of turbocharging, and while that has all sorts of benefits for everything but throttle response, it also has a habit of killing any kind of rasp in the exhaust.

Thankfully, Audi still makes a naturally-aspirated V8, and it’s one that revs through the roof accompanied by an intoxicating soundtrack. In the video below, YouTube uploader Marchettino is driven around through a bunch of tunnels in an Audi RS4 with free-flowing straight pipes. So, do you think Europe currently makes any better sounding V8s than this? By Andrei Nedelea. MTM S8 Talladega is the RS8 Audi Never Made. For whatever reason, neither Audi nor BMW followed in the footsteps of their star rival Mercedes and its S63 and S65 AMG cars, with Ingolstadt being content with its S8. 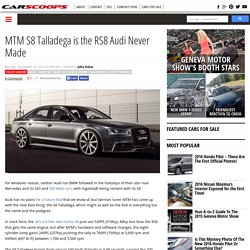 Audi has no plans for a future RS8 that we know of, but German tuner MTM has come up with the next best thing: the S8 Talladega, which might as well be the RS8 in everything but the name and the pedigree. Audi Drivers Are More Attached To Their Car Than Anyone Else, According to Br... Many people depend on cars to get around but how much do they depend on a car brand to help define who they are? 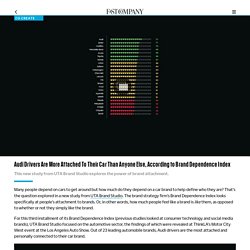 That’s the question explored in a new study from UTA Brand Studio. The brand strategy firm’s Brand Dependence Index looks specifically at people’s attachment to brands. Or, in other words, how much people feel like a brand is like them, as opposed to whether or not they simply like the brand. For this third installment of its Brand Dependence Index (previous studies looked at consumer technology and social media brands), UTA Brand Studio focused on the automotive sector, the findings of which were revealed at ThinkLA’s Motor City West event at the Los Angeles Auto Show. Out of 23 leading automobile brands, Audi drivers are the most attached and personally connected to their car brand.

Audi scored 77 out of a possible 100 points on brand attachment, with respondents classifying the car as playful and sophisticated. So what does a study like this mean for marketers?