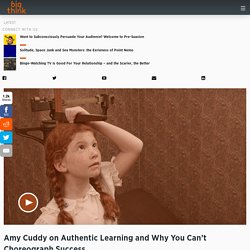 And we also know that they often backfire. That, you know, by January 15 a lot of people have given up on their New Year’s resolutions. Why is it that we keep making them and keep failing? Because they’re so big, they’re so distant and they require a million little steps in between. And each of those steps is an opportunity to fail. And they’re very much outcome focused. When kids are focused on each grade as a failure or a win, so they’re very outcome focused you’re not building resilient kids because people are going to fail, you know. Moving From Lecture to Learning. Think of something you’re really good at. 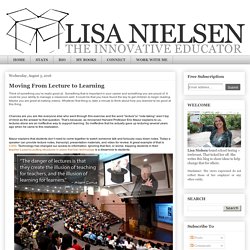 Something that is important in your career and something you are proud of. It could be your ability to manage a classroom well. It could be that you have found the key to get children to begin reading. Maybe you are great at making videos. Whatever that thing is, take a minute to think about how you learned to be good at this thing. Chances are you are like everyone else who went through this exercise and the word “lecture”or “note taking” aren’t top of mind as the answer to that question. Mazur explains that students don’t need to come together to watch someone talk and furiously copy down notes. More and more educators, understand, from master teachers like David J. Taiye Selasi: Don't ask where I'm from, ask where I'm a local. Richard Turere: My invention that made peace with lions. Security Check Required. Uk.businessinsider. On Saturday, August 20, 27-year-old Singaporean lawyer Darren Tay became the Toastmasters International world champion of public speaking. 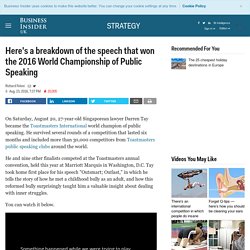 He survived several rounds of a competition that lasted six months and included more than 30,000 competitors from Toastmasters public speaking clubs around the world. He and nine other finalists competed at the Toastmasters annual convention, held this year at Marriott Marquis in Washington, D.C. Tay took home first place for his speech "Outsmart; Outlast," in which he tells the story of how he met a childhood bully as an adult, and how this reformed bully surprisingly taught him a valuable insight about dealing with inner struggles. You can watch it below. Something happened while we were trying to play your video! Business Insider spoke with Tay about his winning speech and what others can learn from it: He immediately disarms the audience "That is to get the audience comfortable first," he told Business Insider.

By Phil Edwards on July 19, 2016 We had supersonic transport — until almost 15 years ago, when it stopped. 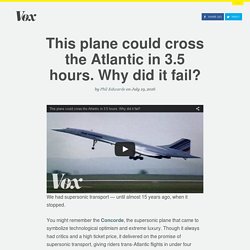 You might remember the Concorde, the supersonic plane that came to symbolize technological optimism and extreme luxury. Though it always had critics and a high ticket price, it delivered on the promise of supersonic transport, giving riders trans-Atlantic flights in under four hours. And then in 2003, the Concorde landed for good. What went wrong? The video above examines the tangled mess that doomed the Concorde. But even if the Concorde failed, it looked beautiful doing so. Smithsonian curator Bob Van der Linden, who also rode on the plane, told me the journey was both extraordinary and surprisingly ordinary, because the engineers strove to make Concorde as comfortable as any passenger flight. And that’s the enticing paradox of this late, great plane: It could be both an engineering masterpiece and a business failure at the same time. The Quest to Save the Rusty-Patched Bumble Bee - The Atlantic.

Aging and Alone in Manhattan's Chinatown - The Atlantic. The epic journey of a refugee cat to find its family. Snowflake, Arizona: where the residents are allergic to life. Who are they? The original 60 Minutes interview from 2008. Designing Schools for 21st Century Learning.