Have Superheroes Killed the Movie Star? Looking back at this dismal summer of superhero adaptations, I am reminded of something Chris Rock said during the 77th Academy Awards: "There are only four real stars, and the rest are just popular people. 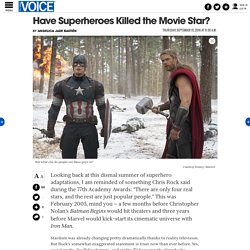 " This was February 2005, mind you — a few months before Christopher Nolan’s Batman Begins would hit theaters and three years before Marvel would kick-start its cinematic universe with Iron Man. Stardom was already changing pretty dramatically thanks to reality television. Glogin?URI= Photo. 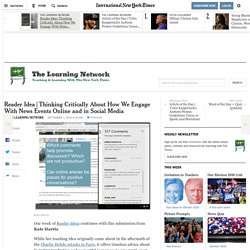 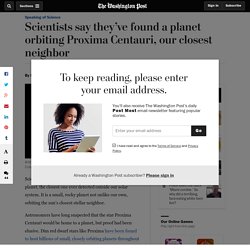 (ESO/G. Coleman) Scientists have discovered what they believe to be a new planet, the closest one ever detected outside our solar system. He withered away for 7 years. Doctors didn’t realize his passion was killing him. Seeking admission to top colleges, Chinese students flock to U.S. private schools. An aerial image of Cape Cod Academy in Osterville, Mass. 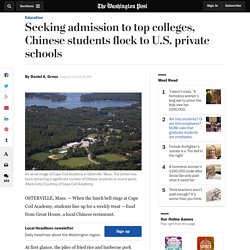 The school has been attracting a significant number of Chinese students in recent years. (Mark Cote/Courtesy of Cape Cod Academy) — When the lunch bell rings at Cape Cod Academy, students line up for a weekly treat — food from Great House, a local Chinese restaurant. local education Orlando Shooting Updates News and analysis on the deadliest mass shooting in U.S. history. Why Ramen Is More Popular Than Cigarettes in U.S. Prisons. Instant noodles are usually thought of as the go-to meal for broke college students. 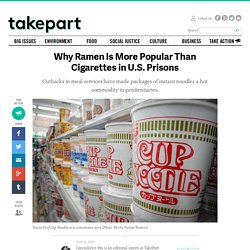 But precooked, dried packages of ramen are helping another population survive. According to research presented Monday at the annual meeting of the American Sociological Association, ramen—known in penitentiaries as “soups”—has replaced cigarettes as the most popular form of prison currency. Along with a pack of smokes, people who are locked up are bartering with ramen, trading packs of it in exchange for laundry services or clothing. RELATED: Activists to Feds: Closing Private Prisons Won’t Help Most Inmates Michael Gibson-Light, a University of Arizona doctoral student and the lead author of an unpublished study about the issue, attributes the rise of ramen to “punitive frugality.” Inmates involved in the study reported that the soup was worth far more than the 59-cent price tag in the prison commissary. It’s family, not friends, who may help you live longer, study says. (iStock) The company you keep has long been thought to be an important factor in both mental and physical well-being. 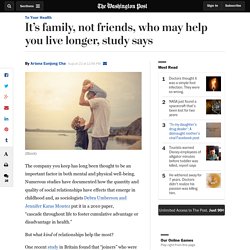 Numerous studies have documented how the quantity and quality of social relationships have effects that emerge in childhood and, as sociologists Debra Umberson and Jennifer Karas Montez put it in a 2010 paper, “cascade throughout life to foster cumulative advantage or disadvantage in health.” But what kind of relationships help the most? One recent study in Britain found that “joiners” who were part of a sports club, religious organization, trade union or any other kind of leisure or professional group had a lower risk of death in the first six years of retirement. 3 Things Great Leaders Inside Contemporary Organizations Do. Great leaders are less interested in telling every cell in their organization what to do than they are in creating an environment that allows those cells to thrive. 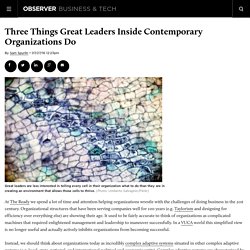 (Photo: Umberto Salvagnin/Flickr) At The Ready we spend a lot of time and attention helping organizations wrestle with the challenges of doing business in the 21st century. Organizational structures that have been serving companies well for 100 years (e.g. Taylorism and designing for efficiency over everything else) are showing their age. It used to be fairly accurate to think of organizations as complicated machines that required enlightened management and leadership to maneuver successfully. 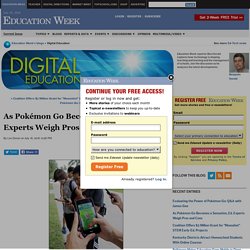 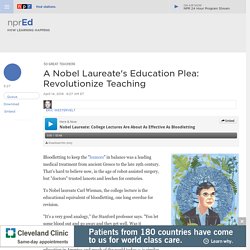 Disintegration of Traditional College Lecture Negatively Affects Students. As a doctoral candidate interviewing at a liberal-arts college some years ago, I rambled, waded through pages of notes, and completely lost my train of thought at one point during my job presentation. 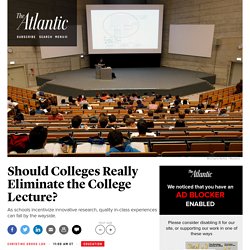 Even though I was eventually offered the position, I was keenly aware that, despite interviewing for a job in which I’d have to stand in front of students day after day, I’d never been trained in giving a lecture—and it showed. But that lack of training is not unusual; it’s the norm. Despite the increased emphasis in recent years on improving professors’ teaching skills, such training often focuses on incorporating technology or flipping the classroom, rather than on how to give a traditional college lecture. Medicine is failing obese people. Watching a person die from cardiac arrest in an intensive care unit is devastating. It’s especially so when the person is a woman in her 40s who has been smothered to death by her own weight — and we doctors can do nothing to save her.

This 500-pound patient, who was at a county hospital in Georgia where I was working, had respiratory failure caused by obesity hypoventilation syndrome, a breathing disorder. It was just the tip of the iceberg of her medical problems. Her obesity had contributed to the development of heart failure, which led to kidney failure that necessitated dialysis. Her respiratory failure required mechanical ventilation, which placed her lungs at increased risk for infection. While we "saved" her after the initial cardiac arrest, her weakened heart and body arrested again. Use Popular Music to Improve Reading and Inspire Writing. Teaching would be the easiest job in the world if following mandated curriculum and reading from your latest teacher’s edition meant all of your students would listen and learn.

But we know that teaching involves lighting a spark in students that motivates, inspires, and makes them want to learn and achieve. We also know that what ignites a student’s passion for learning varies from student to student — there is no one-size-fits-all approach. Over the years, I’ve discovered that one way to engage almost every student, even those who are reluctant readers and writers, is through song. This week I’ll share with you some of the ways I use music to inspire, motivate, and teach reading and writing (along with life skills!) In my classroom. Music in Reader’s Workshop. Barbie’s got a new body – and now Mattel is tackling her other big image problem. In her nearly six decades on toy-store shelves, perhaps no year has brought bigger change for Barbie than 2016. After watching the iconic doll’s dominant market share slip every year since 2009, Mattel gambled in January on a major makeover.

It gave Barbie more varied body shapes, skin tones and hair types. The D.B. Cooper case has baffled the FBI for 45 years. Now it may never be solved. Back away from those sardines! Feeding wild dolphins does them harm. HILTON HEAD ISLAND, S.C. — Jean Fruh heard a thud when something landed on the dock where she was standing. She turned and walked toward a family of 10 that was climbing into rental kayaks at Shelter Cove Marina.

Fruh heard another thud, and saw a tin of sardines fall out of one person's pocket. “The family literally had pockets of them,” Fruh said as she describes the scene on Hilton Head Island, South Carolina. People are actually waiting two hours in line for raw fish. Forget Cronuts and rainbow bagels, New Yorkers are lining up for uncooked albacore and brown rice. Since it opened on West 37th Street in January, Pokéworks — a fast-casual spot specializing in the Hawaiian raw-fish dish known as poké (pronounced poh-KAY) — has drawn lines that stretch down the block. Climate Change Claims a Lake, and an Identity. I’m a millennial and my generation sucks.