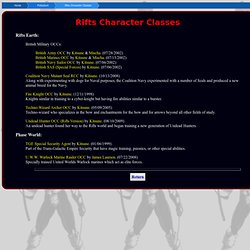 Fire Knight OCC by Kitsune. (12/11/1998) Knights similar in training to a cyber-knight but having fire abilities similar to a burster. Techno-Wizard Archer OCC by Kitsune. (05/09/2005) Techno-wizard who specializes in the bow and enchantments for the bow and for arrows beyond all other fields of study. Undead Hunter OCC (Rifts Version) by Kitsune. (08/10/2009) An undead hunter found her way to the Rifts world and began training a new generation of Undead Hunters. 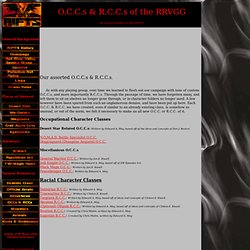 As with any playing group, over time we learned to flesh out our campaign with tons of custom O.C.C.s, and more importantly R.C.C.s. Through the passage of time, we have forgotten many, and left them to sit on shelves no longer gone through, or in character folders no longer used. A few however have been spared from such an unglamorous demise, and have been put up here. Each O.C.C. & R.C.C. we have created, even if similar to an already existing class, is somehow so unusual, or out of the norm, we felt it necessary to make an all new O.C.C. or R.C.C. of it. Occupational Character Classes. The Great Netbook of Spells For RIFTS by Sam Welch. GlowLevel: 1 Range: Self or 30ft radius around caster. 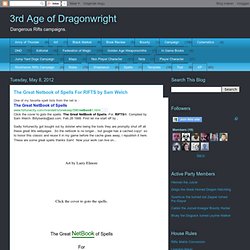 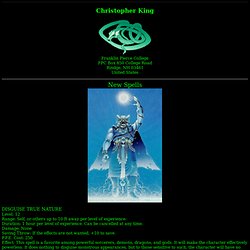 Rifts New Necromancer Spells. These spells can also be used for Heroes Unlimited, Palladium Fantasy, Beyond The Supernatural, and Nightbane in most cases. 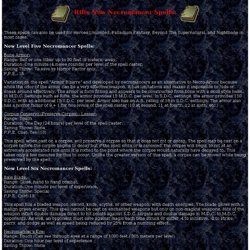 New Level Five Necromancer Spells: Bone Armor: Range: Self or one other up to 30 feet (9 meters) away. Duration: One minute (4 melee rounds) per level of the spell caster. Saving Throw: To save vs Horror Factor only. P.P.E.: 15 Variation on the spell "Armor Bizarre" and developed by necromancers as an alternative to Necro-Armor because while the odor of the armor can be a very effective weapon, it has limitations and makes it impossible to hide or sneak around effectively. Corpus Conservo (Preserve Corpse) - Lesser: Range: Touch Duration: One Day (24 hours) per level of the spell caster. This spell, when cast on a corpse, will preserve a corpse so that it does not rot or decay. New Level Six Necromancer Spells: Bale Blade: Range: Close, hand to hand combat. This spell fills a bladed weapon (sword, knife, scythe, or other weapon) with death energies.

Warlock Spells. These spells can be used for Rifts, Heroes Unlimited, Palladium Fantasy, Beyond The Supernatural, and Nightbane in most cases. 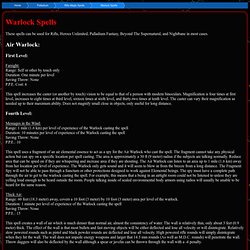 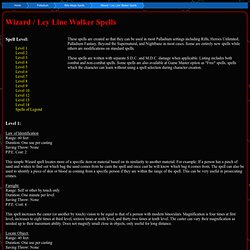 Cost: 2 This simple Wizard spell locates more of a specific item or material based on its similarity to another material. For example: If a person has a pinch of sand and wishes to find out which bag the sand comes from he casts the spell and once cast he will know which bag it comes from. The spell can also be used to identify a piece of skin or blood as coming from a specific person if they are within the range of the spell. Rifts New Temporal Spells. These spells can also be used for Heroes Unlited, Palladium Fantasy, Beyond The Supernatural, and Nightbane in most cases. 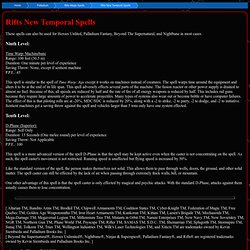 Ninth Level: Time Warp: MachinebaneRange: 100 feet (30.5 m) Duration: One minute per level of experience Saving Throw: None, except if sentient machine P.P.E.: 45 This spell is similar to the spell of Time Warp: Age except it works on machines instead of creatures. The spell warps time around the equipment and alters it to be at the end of its life span. Rifts: Ether Spells. If you like the reocities.com project you can donate bitcoins to: 1E8rQq9cmv95CrdrLmqaoD6TErUFKok3bF Ether spells deal primarily with light, energies, raditions, heat, P.P.E. and magic, and transformations. 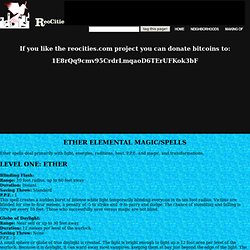 Blinding Flash: Range: 10 foot radius, up to 60 feet awayDuration: InstantSaving Throw: StandardP.P.E.: 1 This spell creates a sudden burst of intense white light temporarily blinding everyone in its ten foot radius. Victims are blinded for one to four melees, a penalty of -5 to strike and -9 to parry and dodge. The chance of stumbling and falling is 50% per every 10 feet. ROBOTECH: THE THIRD INVID WAR. Last Updated: April 27th, 1998 Recent Additions: None, sorry. 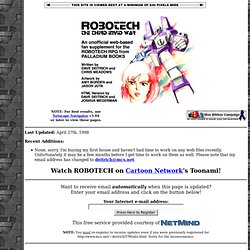 I'm buying my first house and haven't had time to work on any web files recently. Unfortunately it may be a few months before I get time to work on them as well. Trustrum. The Black Vault. Where Internet Gaming Intersects with Sanity. Quality In Rifts: Remembering Pete Overton Pete Overton was a valued member of our forums, a long time contributor of Rifts material, and an all-around good person. In 2009, Pete passed away in his home, leaving the world too soon. In tribute, N9 is hosting the work from his website Quality In Rifts, with hopes of perserving his legacy a little longer. For those unfamiliar, Pete's mission was "More Background. Less Toys. " Kitsune's Palladium Web Page. Recommended Browsers are Firefox or Chrome.

Internet Explorer may not display all of the graphics correctly. Also, in order to get the full experience, a screen resolution with of 1024 or greater is recommended. First started in 1997, this website is one of the largest collections of independent Palladium game system material available on the internet. It has gone through several major updates since its creation. It is a non commercial and the author receives no profit for it. The Home of Palladium Books and their Role Playing Games.