Benefits of using flutter app development in Grocery Delivery App. The commencement of technological solutions to human welfare has transformed the way people utilize technology and make them aware of trending ideas. 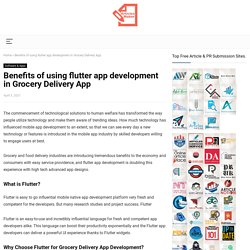 How 5G will transform the mobile app development industry? Have you experienced the Million MB of data transfer potential in seconds globally? 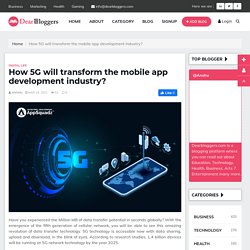 With the emergence of the fifth generation of cellular network, you will be able to see this amazing revolution of data transfer technology. 5G technology is accessible now with data sharing, upload and download, in the blink of eyes. According to research studies, 1.4 billion devices will be running on 5G network technology by the year 2025. How First-Party Kotlin Support impacts businesses? Google has officially announced Kotlin as the first-class programming language for android app development. 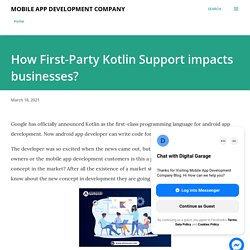 Now android app developer can write code for the app in either Kotlin or Java. The developer was so excited when the news came out, but what does this mean for the business owners or the mobile app development customers is this a positive change or just a come and go concept in the market? After all the existence of a market starts from customers, so they need to know about the new concept in development they are going to opt for. Kotlin is an optional language to see a better and easier way of development otherwise developers can continue development using Kotlin as well. So, most readers will wonder why anyone would switch to Kotlin then here are the number of benefits: Less Code and Built-In Conveniences. Why apps on the app store generate higher revenue? From the perspective of history apps on the google play store have a large number of downloads in comparison to that if the apple app store. 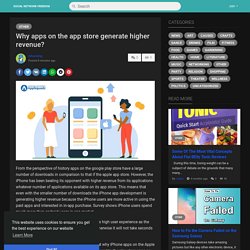 However, the iPhone has been beating its opponent with higher revenue from its applications whatever number of applications available on its app store. This means that even with the smaller number of downloads the iPhone app development is generating higher revenue because the iPhone users are more active in using the paid apps and interested in in-app purchase. Survey shows iPhone users spend much more than android users in-app market. All the iPhone app developers need to consider is high user experience as the user is paying for that it will expect perfection otherwise it will not take seconds for the users in switching service.

Better Security in iOS Apps: iPhone is popular for its security concern toward its user data and activities. User Loyalty To iOS Devices: iPhone Users Spend More on In-App Purchases as compared to Android users: Summing up. Flutter App Development Company - Google Flutter 2 Features: Google Mobile Ads For Flutter Beta, And Much More. Google announced flutter in 2018; at that time, the company defined its UI toolkit as the cross-platform app development that is excellent because previously it was introduced as a native mobile app creation tool. 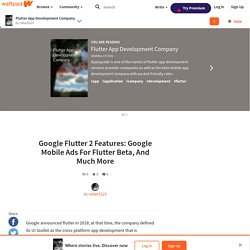 Now toolkit has been extended by adding Flutter 2, along with this availability of dart 2.12 led to Google Mobile Ads for Flutter beta and more. This Kotlin based tool will help you build Android apps faster: Google. Google launched the alpha version of its Kotlin based development tool. 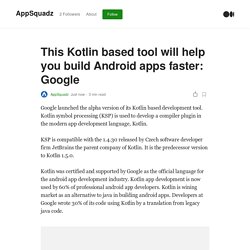 Kotlin symbol processing (KSP) is used to develop a compiler plugin in the modern app development language, Kotlin. KSP is compatible with the 1.4.30 released by Czech software developer firm JetBrains the parent company of Kotlin. It is the predecessor version to Kotlin 1.5.0. Flutter App Developers can write once and use again: Google Flutter 2.0. Google Flutter is supportive of all technologies like web apps, macOS, Linux, and Windows. 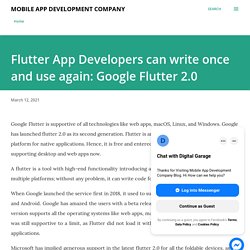 Google has launched flutter 2.0 as its second generation. Flutter is an open-source UI development platform for native applications. Hence, it is free and entered to the general availability. It is supporting desktop and web apps now. A flutter is a tool with high-end functionality introducing an equal smoothness and interface for multiple platforms; without any problem, it can write code for the operating system. When Google launched the service first in 2018, it used to support two platforms only that are iOS and Android.

How to choose the right Software Development Company? Finding a perfect software development organization for your project and especially when you are hiring the first time. 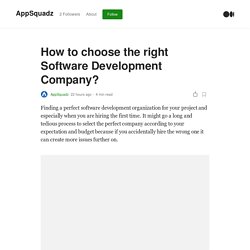 It might go a long and tedious process to select the perfect company according to your expectation and budget because if you accidentally hire the wrong one it can create more issues further on. Choosing the right mobile app development company to have many benefits like: · It reduces cost · Acquire experience and resources · Lower expense · Grow business well Here are some points to consider while looking for an app development company, these tactics will surely help you to make the right decision. Experience with Your Required Custom Software. Top ten startups currently performing well in iPhone app development space. What is the Total Cost of Custom Software Development? Artificial intelligence is assisting human welfare is a very well-versed way. 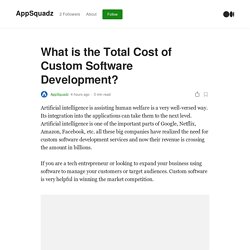 Its integration into the applications can take them to the next level. Artificial intelligence is one of the important parts of Google, Netflix, Amazon, Facebook, etc. all these big companies have realized the need for custom software development services and now their revenue is crossing the amount in billions. If you are a tech entrepreneur or looking to expand your business using software to manage your customers or target audiences.

Which platform is more money-making for apps, Google PlayStore or AppStore? We have caught a peak where every industry is using mobile applications for their expansion and more audience engagement. 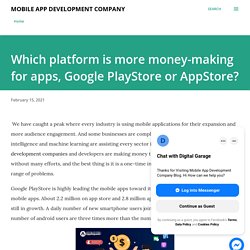 And some businesses are complete software-based. Artificial intelligence and machine learning are assisting every sector in a Broadway. iPhone app development companies and developers are making money through mobile apps, from one place without many efforts, and the best thing is it is a one-time investment. It has simplified the vast range of problems. Google PlayStore is highly leading the mobile apps toward itself being the most loved platform for mobile apps. About 2.2 million on app store and 2.8 million apps are available on PlayStore.

Still, this does not define the revenue of the applications. Let’s find out where mobile apps are making more money, and know that whether your investment is going to yield high revenue or not. Where do apps make more money? Businesses that will be leveraged by Artificial Intelligence in 2021. Artificial Intelligence is the masterpiece of the Technology world in our age. It guarantees streamlining, more proficiency, less expensive operational expense, and operational accuracy by decreasing human mistake inside cycles. Driving Business proprietors across ventures are putting resources into Machine Learning and Artificial Intelligence, as large information impact these fields. The effect of this venture can achieve various advantages for some businesses and it's difficult to contend that there is an industry that won't be affected. 8 Mobile App Trends that will be leading in 2021.

Welcome, just organization made out of the world's best youthful business people. YEC individuals address practically every industry and have made a huge number of occupations. Lately, advanced mobile app development company has become an inexorably significant segment of numerous businesses' general marketing methodologies. With this computerized pattern comes a huge development in mobile marketing too. All things considered, mobile gadgets are responsible for around half of the web traffic around the world, and that number will just keep on developing. As clients progressively go to their keen gadgets to associate with their number one brands, organizations should screen trends in mobile marketing to remain current and serious. Are you building a career in Android App Development? Learn what’s new! A passion for investigating and understanding the details behind tempting, user inviting, and critical thinking apps could be effectively converted into an employable ability through cutting edge Android app development.

Seeing the developing notoriety of mobile apps among users, dominating app development abilities would surely ensure your employability and carry a range of vocation occasions to browse. Notwithstanding, before concluding Android app development as a lifelong way and choosing a preparation program to learn it, an undergrad, graduate, or a representative searching for a profession change should understand what the expectations, requests, patterns, abilities and responsibilities in the field resemble. 5 skills you should look for in an iOS App Developer. Indeed, as we as a whole realize that the methodology of picking the correct way for the vocation can be a little troublesome, especially in the specialized area.

These days, the mobile app development industry is flourishing and taking a gander at the current circumstance it seems like the degree is relied upon to increment in the impending years. This just implies that there are many learning openings for vocation development in this area. In this blog, we will especially zero in on the key abilities you need to have if you are intending to fabricate your profession as a first-class iOS app developer. There are different things on which you need to attempt to begin your excursion in one of the main iOS app development organizations in the versatile app development industry. Beneath recorded are a portion of the key abilities that you should hold skill in, to be an iOS Developer: 1. It is essential to have a solid order of the Swift programming language. 2. 3. Feature Insights and Challenges in Grocery Delivery App development.

Individuals have gotten terrified after the COVID-19 and attempting to remain at home to try not to get tainted with the infection. Web App vs Mobile App Development: Which is Better? Individuals go through more than two hours daily perusing the web utilizing conventional app interfaces, and regardless of the ascent of the versatile and portable first plan, work area crowds are as yet critical. Things being what they are, which stage would it be advisable for you to embrace for another computerized administration, portable app, or the web?