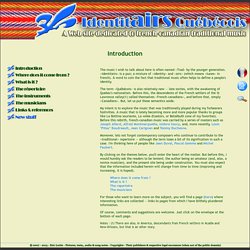 «Identitairs» is a pun; a mixture of «identity» and «airs» (which means «tunes» in french). A word to coin the fact that traditional music often helps to define a people's identity. The term «Québécois» is also relatively new — late sixties, with the awakening of Quebec's nationalism. Before this, the descendents of the French settlers of the St Lawrence valley(1) called themselves «French-canadians», and before that, simply «Canadians».

But, let us put these semantics aside. Where does it come from ? For those who want to learn more on the subject, you will find a page (here) where interesting links are collected ― links to pages from which I have blithely plundered information. Tuneworks1. Folk tune finder. Les Deux Freres. Making Basses Interesting. Index of /~jc/music/abc. I've been experimenting with a few tools to do useful things in directories full of .abc tune files: [Session directory] - Session lister - Tune lister - Collection lister These are "works in progress" that I've included here to get ideas for making them more useful. 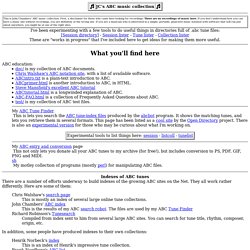 ABC education: Indexes of ABC tunes There are a number of efforts underway to build indexes of the growing ABC sites on the Net. Chris Walshaw's search page This is mostly an index of several large online tune collections. John Chambers' ABC index This is the results of my ABC search robot. Richard Robinson's Tunesearch Compiled from index sent to him from several large ABC sites. In addition, some people have produced indexes to their own collections: Henrik Norbeck's index This is an index of Henrik's impressive tune collection. 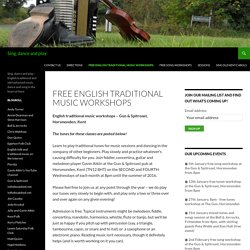 Learn to play traditional tunes for music sessions and dancing in the company of other beginners. Play slowly and practice whatever’s causing difficulty for you. Join fiddler, concertina, guitar and melodeon player Gavin Atkin at the Gun & Spitroast pub at Horsmonden, Kent (TN12 8HT) on the SECOND and FOURTH Wednesdays of each month at 8pm until the summer of 2016. Please feel free to join us at any point through the year – we do play our tunes very slowly to begin with, and play only a two or three over and over again on any given evening! Admission is free. In addition to the classes we run tunes sessions (see the Sessions page) and in the spring and autumn also put on a dance in which the class is joined by friends to form a band to play for dancing. 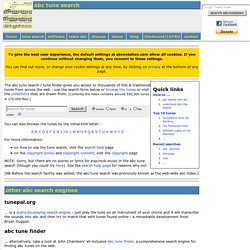 If you continue without changing them, you consent to these settings. You can find out more, or change your cookie settings at any time, by clicking on privacy at the bottom of any page. The abc tune search / tune finder gives you access to thousands of folk & traditional tunes from across the web - use the search form below or browse the tunes or visit the collections they are drawn from. [Currently the index contains around 550,000 tunes in 270,000 files.] You can also browse the tunes by the initial title letter: For more information: NOTE: Sorry, but there are no scores or lyrics for pop/rock music in the abc tune search (though you could try here). [NB Before the search facility was added, the abc tune search was previously known as the web-wide abc index.] tunepal.org abc tune finder musipedia ... or, take a look at musipedia, Rainer Typke's searchable collection of music. 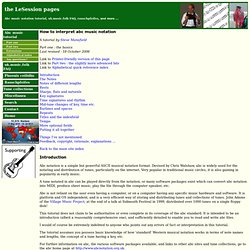