10 ADVANCED EXOSKELETONS AND THEIR USES. 5 Exoskeleton Robot Suit That Exist NOW. KURATA, the world's first robotic mech suit. Powered exoskeleton. The exhibit "future soldier", designed by the US Army A powered exoskeleton, also known as powered armor, exoframe, or exosuit, is a mobile machine consisting primarily of an outer framework (akin to an insect's exoskeleton) worn by a person, and a powered system of motors or hydraulics that delivers at least part of the energy for limb movement. 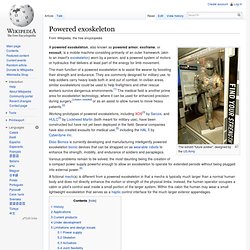 The main function of a powered exoskeleton is to assist the wearer by boosting their strength and endurance. They are commonly designed for military use, to help soldiers carry heavy loads both in and out of combat. In civilian areas, similar exoskeletons could be used to help firefighters and other rescue workers survive dangerous environments.[1] The medical field is another prime area for exoskeleton technology, where it can be used for enhanced precision during surgery,[citation needed] or as an assist to allow nurses to move heavy patients.[2] History[edit] Exoskeleton being developed by DARPA Applications[edit] Current products[edit]

Germany develops 'smart factories' to keep an edge. AMBERG, Germany--The next front in Germany's effort to keep up with the digital revolution lies in a factory in this sleepy industrial town. 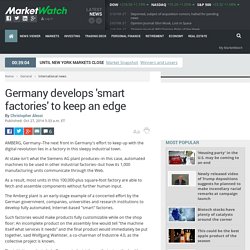 At stake isn't what the Siemens AG plant produces--in this case, automated machines to be used in other industrial factories--but how its 1,000 manufacturing units communicate through the Web. As a result, most units in this 100,000-plus square-foot factory are able to fetch and assemble components without further human input. The Amberg plant is an early-stage example of a concerted effort by the German government, companies, universities and research institutions to develop fully automated, Internet-based "smart" factories.

Such factories would make products fully customizable while on the shop floor: An incomplete product on the assembly line would tell "the machine itself what services it needs" and the final product would immediately be put together, said Wolfgang Wahlster, a co-chairman of Industrie 4.0, as the collective project is known. This is a FORTIS exoskeleton. This is a FORTIS exoskeleton, it augments human abilities, reducing muscle fatigue by 300 percent. : pics. BBC News: Human 'drone taxi' to be tested in Nevada. Image copyright AP A human-carrying drone has been given approval for test flights in Nevada, the first of its kind in the United States. 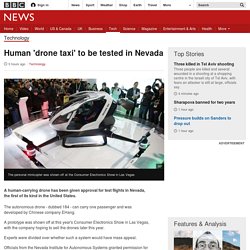 The autonomous drone - dubbed 184 - can carry one passenger and was developed by Chinese company EHang. A prototype was shown off at this year's Consumer Electronics Show in Las Vegas, with the company hoping to sell the drones later this year. Experts were divided over whether such a system would have mass appeal. Officials from the Nevada Institute for Autonomous Systems granted permission for the drone to be tested and offered to help EHang submit the results to the Federal Aviation Administration in a bid to win further approval.

It is not clear whether the drone will carry a passenger during tests. "I personally look forward to the day when drone taxis are part of Nevada's transportation system," the institute's business development director, Mark Barker, told local the Las Vegas Review Journal. "Consumers are led by what regulators say are safe. Electronic noses explained: in future we will be sniffing out disease. Electronic noses could offer a rapid and non-invasive approach to diagnosing disease. 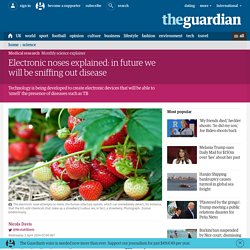 But how do they work and what could the future hold? We ask expert Dr James Covington from the University of Warwick to explain. What is an electronic nose? The electronic nose in an instrument that attempts to mimic the human olfactory system. Humans and animals don't identify specific chemicals within odours; what they do is to recognise a smell based on a response pattern. How does it work? A traditional electronic nose has an array of chemical sensors, designed either to detect gases or vapours. Can't we just use dogs? A dog is very, very sensitive. What will an electronic nose be used to diagnose? If there is an easy test that can be done for 5p, for example, like a dipstick test, then there is very little point in using [an electronic nose] as it is unlikely to save the NHS money and time.

Is it commercialised yet? There are a few products on the market and these are fairly recent. A paralysed man used a bionic suit to give daughter away.