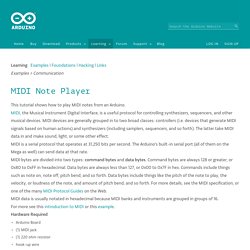 MIDI, the Musical Instrument Digital Interface, is a useful protocol for controlling synthesizers, sequencers, and other musical devices. MIDI devices are generally grouped in to two broad classes: controllers (i.e. devices that generate MIDI signals based on human actions) and synthesizers (including samplers, sequencers, and so forth). DMXShield. DMX-shields The DMX-shield is an add-on (or "shield") for the Arduino. 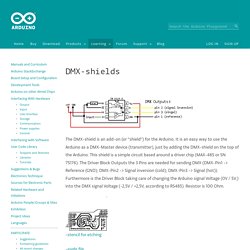 It is an easy way to use the Arduino as a DMX-Master device (transmitter), just by adding the DMX-shield on the top of the Arduino. This shield is a simple circuit based around a driver chip (MAX-485 or SN 75176). The Driver Block Outputs the 3 Pins are needed for sending DMX (DMX-Pin1 -> Reference (GND); DMX-Pin2 -> Signal inversion (cold); DMX-Pin3 -> Signal (hot)). Furthermore is the Driver Block taking care of changing the Arduino signal Voltage (0V / 5V,) into the DMX signal Voltage (-2,5V / +2,5V, according to RS485). Store. Arduino + android phone + Domotic Home. Home automation with Arduino and Android. Controlling AC light using Arduino with relay module. Hello friends! 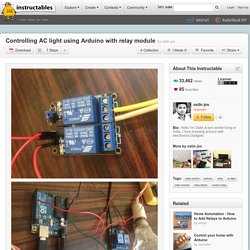 I'm Ostin,I ll demonstrate how to control a AC light with Arduino using relay module.It is a simple project and also very dangerous as we are going to deal with high voltage 220v . Do not attempt if you are a amateur in dealing with high voltage. I'll answer few basic questions, which hits when you are novice! Why to use relay for controlling AC light? AC is alternating current 220v (india) which powers the ac lights. Raspberry Pi - Camera Tutorial... Raspberry Pi as low-cost HD surveillance camera.

Raspberry Pi Camera Board ID: 1367 - $29.95. Camera Module Setup. Cloud ip Cameras - LUXCAM. LittleBits' New Kit Lets You Create Your Own Smart-Home Gizmos. LittleBits has steadily expanded its Lego-like modular electronics platform this year, introducing new pieces that let users connect their creations to the internet and link them up to other hardware platforms like Arduino. 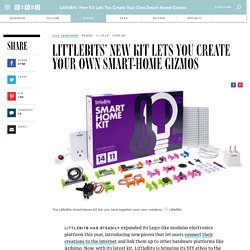 Now, with its latest kit, LittleBits is bringing its DIY ethos to the smart home. The company’s Smart Home Kit is meant to let people build their own version of the internet of things. With six new pieces, users can hack together versions of familiar smart-home concepts—connected coffee pots and presence-aware lamps—or create solutions of their own devising. The idea, says LittleBits CEO Ayah Bdeir, is to give people an alternative to the prepackage solutions being “parachuted” into homes by companies like Belkin and Cisco.

Which Ideas Are Worth Your Time—And Money? At $249, it’s one of the company’s biggest kits to date. Using a sound sensor and the counter, for example, you could rig up a little gadget to text your phone when your dog barks more than 20 times. Smart slums: utopian or dystopian vision of the future? Life in a smart city is a frictionless; free of traffic congestion, optimally lit, with everything from bins to buildings constantly reporting their status and managing their interactions with residents. 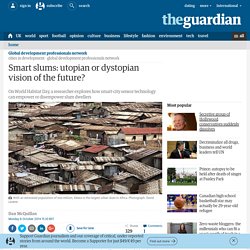 The smart slum is still a peripheral idea, but we can speculate on the likely impact of extending this ‘smartness’ to slums and make two competing claims. Firstly, that development professionals should be wary of smart slums repeating some of the negative impacts of ICT4D; and secondly, that a push for smart slums could be appropriated for social justice. BitLab: EMG SpikerBox by BackyardBrains. BackyardBrains We started Backyard Brains because the only way to really learn about neuroscience was to go to grad school... even though 25% of the world has brain disorders with no cures. 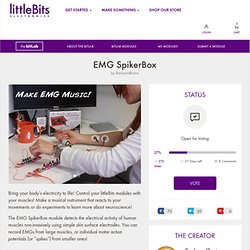 Our goal is to develop tools and experiments to teach electrophysiology from middle school on up. Electrophysiology is truly is how the brain works. From “spikes” to “cyborgs” to “neuroprosthetics”, we build something of interest for every student. Understanding the brain remains a great challenge, both to professional neuroscientists and the general public alike. Arduino-Powered Turntables That Turn DJing Into Child's Play. Beat Blox is a beats-making station built from rudimentary turntables, Arduino boards, sensors, and some very simple building blocks. 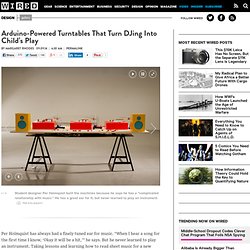 Per Holmquist Student designer Per Holmquist built the machines because he says he has a "complicated relationship with music. " He has a great ear for it, but never learned to play an instrument. Each Beat Blox box has an Arduino that mimics a different instrument: one plays the bongos, another plays the bass (Holmquist tapped the standard Music Instrument Shield for those), and the third plays the snare drum, which Holmquist specially programmed after finding a discarded drum set. Distance sensors on the turntable arm react to wooden blocks that players set on the platter. ProMini. The Arduino Pro Mini is intended for advanced users who require flexibility, low-cost, and small size. 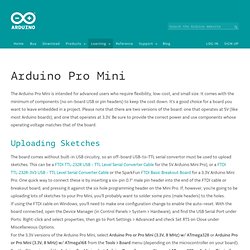 It comes with the minimum of components (no on-board USB or pin headers) to keep the cost down. It's a good choice for a board you want to leave embedded in a project. Please note that there are two versions of the board: one that operates at 5V (like most Arduino boards), and one that operates at 3.3V. Be sure to provide the correct power and use components whose operating voltage matches that of the board. Uploading Sketches. The Lm35 Device Makes Temperature Calibration A Breeze. If you are thinking about making a temperature sensing project the easiest way to do it is to use a sensor based on the diode temperature coefficient. 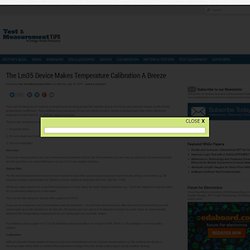 This coefficient is a measure of how any diode junction reacts to temperature and every electronic engineer knows that it is -2.1mV per degree Celsius. There’s two problems in using it directly: 1. It’s going down. 2. 3. Direction Of course using opamps you can correct these problems and for the first problem you can use an opamp in it’s inverting mode so now you have an output that goes up by 2.1mV per degree Celsius. Output Size For the second problem it would be much easier to use if the actual output could be read directly using a volt meter e.g. 25 degrees Celsius represented by 250mV is much easier to read than 52.5mV. (52.5/2.1=25). LM35 LED Temperature Bar. Accurate LM35 readings » Ogalik. Make Your Own Musical Floppy Drive. Wearable Technology - Make It Wearable Challenge by Intel. Circuit Scribe: Instantly Draw Functional Electrical Circuits on a Piece of Paper.

The folks over at Urbana-based Electroninks Incorporated just launched a Kickstarter project for a new kind of pen that draws fuctional electronic circuits instantly. 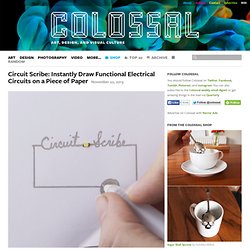