Wordsworth's Poetical Works Themes. Nature "Come forth into the light of things, / Let Nature be your Teacher. 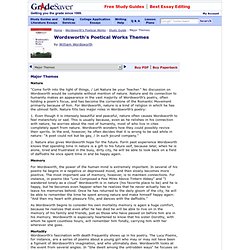 " No discussion on Wordsworth would be complete without mention of nature. Nature and its connection to humanity makes an appearance in the vast majority of Wordsworth's poetry, often holding a poem's focus, and has become the cornerstone of the Romantic Movement primarily because of him. For Wordsworth, nature is a kind of religion in which he has the utmost faith. Nature fills two major roles in Wordsworth's poetry: 1. 2. Memory For Wordsworth, the power of the human mind is extremely important.

As Wordsworth begins to consider his own mortality memory is again a huge comfort, because he realizes that even after he has died he will be able to live on in the memory of his family and friends, just as those who have passed on before him are in his memory. Mortality Wordsworth's fascination with death frequently shows up in his poetry. Www.chaparralpoets.org/devices.pdf. The World is Too Much with Us Analysis, William Wordsworth. William Wordsworth’s “The World is Too Much with Us” (1807) is a sonnet that speaks to the discontent that many readers feel with the materialistic precedence of contemporary society. Within “The World is Too Much with Us”, Wordsworth expresses his romantic belief that every facet of life in modern civilization pulls us further and further from our true nature as human beings and pushes us towards an unnatural state of civilized existence where we are estranged from our roots as natural beings.

Wordsworth’s romantic view is that we, as parts of the natural world, used to live free and spiritually fulfilling lives when we were pre-Christian Pagans, living in the bosom of the forest and praying to ancient gods of the elements. It is for this that Wordsworth could be argued as being well ahead of his time, Wordsworth’s “The World is Too Much with Us” having a message as powerful and true today as when Wordsworth first wrote it over two hundred years ago.

It moves us not. – Great God! Wordsworth's Poetical Works Study Guide : Summary and Analysis of "The Solitary Reaper" In the first stanza the speaker comes across a beautiful girl working alone in the fields of Scotland (the Highland). 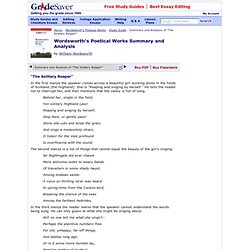 She is "Reaping and singing by herself. " He tells the reader not to interrupt her, and then mentions that the valley is full of song. Behold her, single in the field, Yon solitary Highland Lass! Reaping and singing by herself; Stop here, or gently pass! Alone she cuts and binds the grain, And sings a melancholy strain; O listen! The second stanza is a list of things that cannot equal the beauty of the girl's singing: No Nightingale did ever chaunt More welcome notes to weary bands Of travellers in some shady haunt, Among Arabian sands: A voice so thrilling ne'er was heard In spring-time from the Cuckoo-bird,Breaking the silence of the seas Among the farthest Hebrides.

Wordsworth's Poetical Works Study Guide : Summary and Analysis of "The world is too much with us" The speaker begins this poem by saying that the world is too full of humans who are losing their connection to divinity and, even more importantly, to nature. 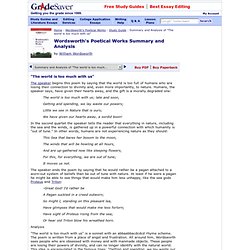 Humans, the speaker says, have given their hearts away, and the gift is a morally degraded one: The world is too much with us; late and soon,Getting and spending, we lay waste our powers;Little we see in Nature that is ours;We have given our hearts away, a sordid boon! In the second quartet the speaker tells the reader that everything in nature, including the sea and the winds, is gathered up in a powerful connection with which humanity is "out of tune. " In other words, humans are not experiencing nature as they should: This Sea that bares her bosom to the moon,The winds that will be howling at all hours,And are up-gathered now like sleeping flowers,For this, for everything, we are out of tune;It moves us not. 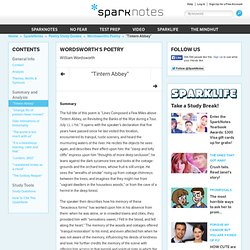 July 13, 1798.” It opens with the speaker’s declaration that five years have passed since he last visited this location, encountered its tranquil, rustic scenery, and heard the murmuring waters of the river. He recites the objects he sees again, and describes their effect upon him: the “steep and lofty cliffs” impress upon him “thoughts of more deep seclusion”; he leans against the dark sycamore tree and looks at the cottage-grounds and the orchard trees, whose fruit is still unripe. He sees the “wreaths of smoke” rising up from cottage chimneys between the trees, and imagines that they might rise from “vagrant dwellers in the houseless woods,” or from the cave of a hermit in the deep forest. Form “Tintern Abbey” is composed in blank verse, which is a name used to describe unrhymed lines in iambic pentameter. Commentary. William Wordsworth, "Lines Written a Few Miles above Tintern Abbey" - Hypertext Reader - Romantic Circles High School - Romantic Circles.

William Wordsworth. William Wordsworth. Discussing prose written by poets, Joseph Brodsky has remarked, “the tradition of dividing literature into poetry and prose dates from the beginnings of prose, since it was only in prose that such a distinction could be made.” 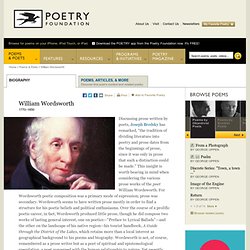 This insight is worth bearing in mind when considering the various prose works of the poet William Wordsworth. For Wordsworth poetic composition was a primary mode of expression; prose was secondary. Wordsworth seems to have written prose mostly in order to find a structure for his poetic beliefs and political enthusiasms. Kirjasto.sci.fi/wordswor.htm. British poet, who spent his life in the Lake District of Northern England. 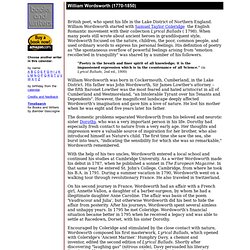 William Wordsworth started with Samuel Taylor Coleridge the English Romantic movement with their collection Lyrical Ballads ( 1798). When many poets still wrote about ancient heroes in grandiloquent style, Wordsworth focused on the nature, children, the poor, common people, and used ordinary words to express his personal feelings. 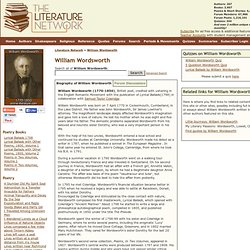 William Wordsworth was born on 7 April 1770 in Cockermouth, Cumberland, in the Lake District. His father was John Wordsworth, Sir James Lowther's attorney. The magnificent landscape deeply affected Wordsworth's imagination and gave him a love of nature. He lost his mother when he was eight and five years later his father. The domestic problems separated Wordsworth from his beloved and neurotic sister Dorothy, who was a very important person in his life.

With the help of his two uncles, Wordsworth entered a local school and continued his studies at Cambridge University. During a summer vacation in 1790 Wordsworth went on a walking tour through revolutionary France and also traveled in Switzerland. In 1795 he met Coleridge. William Wordsworth.