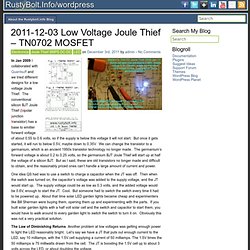 The conventional silicon BJT Joule Thief (bipolar junction transistor) has a base to emitter forward voltage of about 0.55 to 0.6 volts, so if the supply is below this voltage it will not start. But once it gets started, it will run to below 0.5V, maybe down to 0.35V. We can change the transistor to a germanium, which is an ancient 1950s transistor technology no longer made. The germanium’s forward voltage is about 0.2 to 0.25 volts, so the germanium BJT Joule Thief will start up at half the voltage of a silicon BJT. But as I said, these are old transistors no longer made and difficult to obtain, and the reasonably priced ones can’t handle a large amount of current and power. 2011-11-26 MOSFET Joule Thiefs. A few years ago, 2007, I believe, I blogged a few Joule Thief circuits on which I experimented. 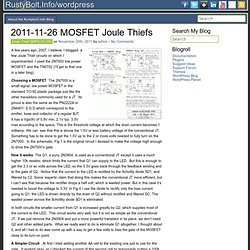 I used the 2N7000 low power MOSFET and the TN0702 (I’ll get to that one in a later blog). Choosing a MOSFET The 2N7000 is a small signal, low power MOSFET in the standard TO-92 plastic package just like the other transistors commonly used for a JT. Its pinout is also the same as the PN2222A or 2N4401: S G D which correspond to the emitter, base and collector of a regular BJT. It has a Vgs(th) of 0.8V min, 2.1V typ, 3.0V max according to the specs. This is the threshold voltage at which the drain current becomes 1 milliamp. How it works The Q1, a puny 2N3904, is used as a conventional JT except it uses a much higher 10k resistor, which limits the current that Q1 can supply to the LED.

In both circuits the smaller current from Q1 is increased greatly by Q2, which supplies most of the current to the LED. Other components The LED I’ve used both white and blue LEDs for most of my JTs. TALKING ELECTRONICS LED Torch. A LED torch is one of the simplest projects you can build and it's very interesting as it uses a super-bright white LED. 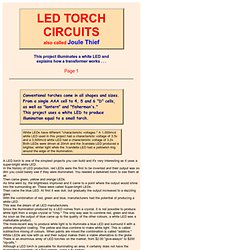 In the history of LED production, red LEDs were the first to be invented and their output was so dim you could barely see if they were illuminated. You needed a darkened room to see them at all. Then came green, yellow and orange LEDs. As time went by, the brightness improved and it came to a point where the output would shine into the surrounding air.

These were called Super-bright LEDs. 2011-12-04 Joule Thief Conventional & Supercharged. Clarification: People have asked if the three windings explained in the schematic are in series or parallel. 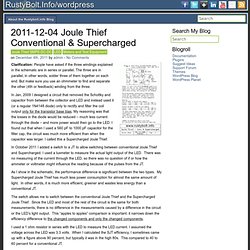 The three are in parallel, in other words, solder three of them together on each end. But make sure you use an ohmmeter to find and separate the other (4th or feedback) winding from the three. In Jan, 2009 I designed a circuit that removed the Schottky and capacitor from between the collector and LED and instead used it (or a regular 1N4148 diode) only to rectify and filter the coil output only for the transistor base bias. My reasoning was that the losses in the diode would be reduced – much less current through the diode – and more power would then go to the LED.

I found out that when I used a 560 pF to 1000 pF capacitor for the filter cap, the circuit was much more efficient than when the capacitor was larger. In October 2011 I added a switch to a JT to allow switching between conventional Joule Thief and Supercharged. I have to go by my memory (my blog is now gone). 2012-07-09 Supercharged Joule Thief – Reduced Brightness.

Peter is experimenting with my Supercharged Joule thief circuit. 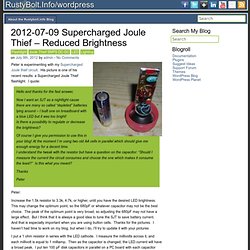 His picture is one of his recent results: a Supercharged Joule Thief flashlight. I quote: Hello and thanks for the fast answer,Now I want an SJT as a nightlight cause there are many so called “depleted” batteries lying around – I built one on breadboard with a blue LED but it was too bright! Is there a possibility to regulate or decrease the brightness? Of course I give you permission to use this in your blog! Peter: Increase the 1.5k resistor to 3.3k, 4.7k, or higher, until you have the desired LED brightness. 01047a.pdf (application/pdf Object) Big Joule Theif.