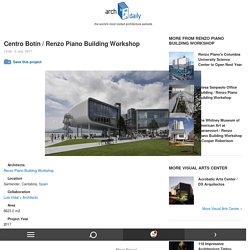 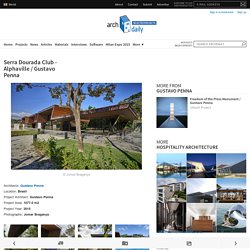 The proposed intervention in Alphaville Country Farm sets a respectful relationship with many original features of the property and gives a unique character to the place. It seeks to insert the new buildings, minimizing interventions in topography and preserving as much existing vegetation. The club is located on the existing plateau, which was formerly the barn. 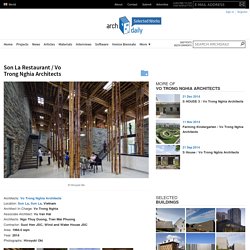 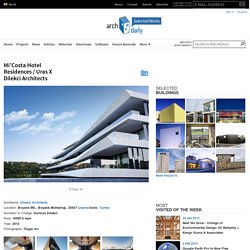 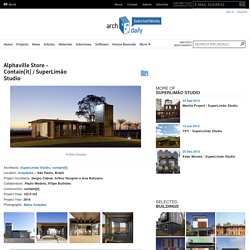 The contain[it] is developed together with an Alphaville, a sales booth that intends to innovate and break with the use of temporary structures for the sale of real estate projects in the Brazilian market. What is seen in the market today are structures that are very attractive for the public, or structures that are significantly reusable. The idea of the project was to address both aims. Since this is a development that operates with subdivisions that are often built in stages, situations occur in which a sales booth is built, demolished shortly afterwards, and a new booth is built in an area very close by. Hicks Orthodontics / BarberMcMurry architects. Architects: BarberMcMurry architects Location: Lenoir City, TN, USA Area: 6800.0 ft2 Year: 2014 Photographs: Denise Retallack Contractor: Hickory Construction Client: Hicks Orthodontics From the architect. 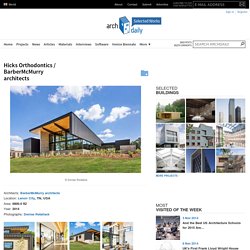 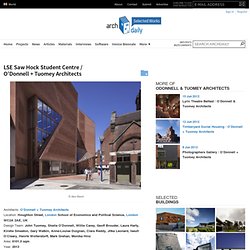 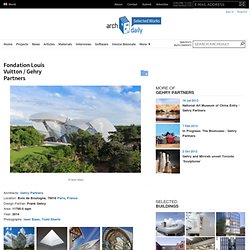 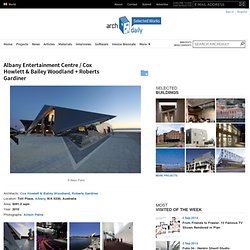 “A waterfront icon seated in the natural beauty of the harbour and its surrounds” The Albany Entertainment Centre is a significant project for the local community and the broader South West region. This building provides International standard entertainment, performance and convention facilities for the region and a catalyst for community interaction along with a re-energised waterfront. Albany holds a rich history where land and water come together to be one of the great natural harbours of the world. The Albany Entertainment Centre forms a jewel placed in the heart of the harbour, a piece of waterside sculpture whose form is bred out of the crystalline molecular structures of the earth like a cut diamond which changes and reflects light as you move around it. 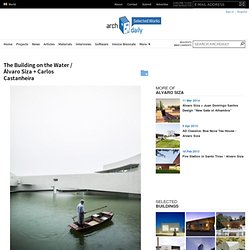 Project Area: 11000 sqm Project Year: 2014 Photographs: Fernando Guerra | FG + SG From the architect. The inauguration of “The Building On the Water” of the Shihlien Chemical plant in Huai’An City, Jiangsu Province, will be held on August 30, 2014. This will be the first work unveiled in China by celebrated architect and 1992 Pritzker Prize winner Álvaro Siza. Located in the New Salt Industrial Park of Huai’An City, Jiangsu Province, Shihlien Chemical Industrial Jiangsu Co. is one of the world’s largest combined soda ash and ammonium chloride production plants.

Over-water construction was an entirely new venture for Álvaro Siza. The Lotus Building and People’s Park / studio505. Architects: studio505 Location: Wujin, Changzhou, Jiangsu, China Year: 2013 Photographs: John Gollings Cost: AUD $12million From the architect. Located in the heart of Wujin, the burgeoning southern district of Changzhou, Jiangsu PRC, the Lotus Building and the 3.5 hectare People’s Park has been designed to act as a cultural anchor and civic landmark – establishing a symbolic commitment of the local government’s ambitions and future aspirations.

The cultural centre, which rises from the landscape in the Azerbaijani capital, is also the first architecture project to be lauded. "We're absolutely delighted to receive the Design of the Year Award," said Hadid. "The surface of the Heydar Aliyev Centre's external plaza rises and folds to define a sequence of public event spaces within; welcoming, embracing and directing visitors throughout the building. " "It's an architectural landscape where concepts of seamless spatial flow are made real – creating a whole new kind of civic space for the city," she added.

Rocco Designs New Campus for Chu Hai College of Higher Education. Modeled after its dense urban surroundings, Chu Hai College of Higher Education’s new campus in Hong Kong meets a complex program while giving students a fantastic view of the ocean. Designed by Rocco Design Architects Limited, the building’s geometry stacks different programmatic uses on top of each other and connects them with a vertical boulevard. The result is a sculptural entity, partially inspired by Chinese calligraphy, that seeks a balance between solid and void. In keeping with the idea of calligraphy, the architects state that “The erection of the new campus in essence alludes to the creation of a new character: a new rudiment that would form the root of new knowledge for the generations to come.”

The university building uses the existing foundations on the site to constrain the first story “podium” that holds communal spaces like a gymnasium. Rooms such as classrooms, which require more space than the building footprint allows, are delegated to the upper stories. Valencia to sue Santiago Calatrava over at City of Arts and Sciences. News: architect Santiago Calatrava is facing legal action from his home city of Valencia because parts of the opera house roof at his City of Arts and Sciences complex are falling off just eight years after completion.

Sections of the swooping mosaic roof of the Palau de les Arts Reina Sofia opera house at the Ciudad de las Artes y las Ciencias de Valencia came away in high winds on Friday, forcing authorities to cancel performances and close the building to the public. Regional government spokesman Maximo Buch announced on Friday that Valencia would sue Calatrava and his architectural firm for the cost of repairs, and said that the building will remain closed until it can be made safe again. A technical report on the state of the building is due next week. Lazika Municipality for Georgia by Architects of Invention. London and Tbilisi firm Architects of Invention has completed a public services building on stilts for a city that doesn't exist yet in Georgia. Fuel Station + McDonalds by Giorgi Khmaladze. A McDonald's restaurant and a petrol station are concealed within this faceted glass shell in Georgia, designed by architect Giorgi Khmaladze (+ slideshow). "The city officials wanted to avoid having a regular gas station in the middle of the area, which right now is undergoing major renewal," Giorgi Khmaladze told Dezeen.

Ninotsminda Border Checkpoint by Luka Machablishvili. The latest in a string of infrastructure projects in Georgia is a twisted cascade of concrete forming a checkpoint at the border with Armenia by architect Luka Machablishvili. Construction is already underway in Ninotsminda on the structure, which will be over 100 metres wide and will divide traffic from both directions into a total of eight lanes. National Olympic Committee House by Architects of Invention. This maple-veneered staircase twists and turns between the floors of an Olympic Museum in Georgia refurbished by UK and Georgia firm Architects of Invention. The architects created openings in the interior walls of the four-storey building to connect the new staircase with exhibitions and other rooms on the upper levels.

A new reception desk was also added as part of the renovation, which features a large fissure that makes it look like it’s been sawn in two. Other projects we've featured in Georgia include a knobbly observation tower and a new international airport. You can also see more stories about staircases here. Photography is by Nakanimamasakhlisi Photo Lab, Nika Mdivani and I. Wuzhen Theatre by Artech Architects. Ornate wooden screens shroud one side of this theatre in Wuzhen, China, while the other side is shielded behind angular brickwork fins (+ slideshow). Rest Stops in Georgia by J. Mayer H. German architects J. Mayer H. have completed the first two of 20 roadside service stations for a new highway running from Azerbaijan to Turkey, through Georgia.

The huge concrete structures shelter petrol filling stations and stretch around glass walls that enclose supermarkets, farmers' markets and exhibitions for arts and crafts. Construction is also now underway on a third. J. House of Justice and Police Station, Mestiaby J. Mayer H. The surrounding mountains were the inspiration behind the textured concrete forms of a civic centre and police station in Mestia, Georgia, by German firm J.