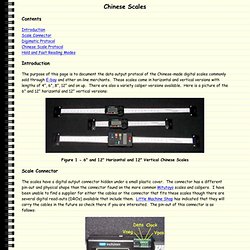 These scales come in horizontal and vertical versions with lengths of 4", 6", 8", 12" and on up. Robotroom: Digital Caliper Pinouts. Digital calipers are one of the most important tools for accurate machining of existing pieces, such as project boxes, switches, and custom parts. 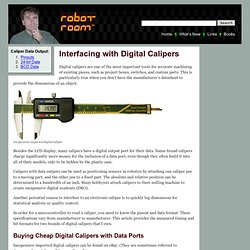 This is particularly true when you don’t have the manufacturer’s datasheet to provide the dimensions of an object. Inexpensive imported digital caliper Besides the LCD display, many calipers have a digital output port for their data. Name-brand calipers charge significantly more money for the inclusion of a data port, even though they often build it into all of their models, only to be hidden by the plastic case. Andy Harsley's official website. To get easy access to the capiler's serial port I need a suitable cable. 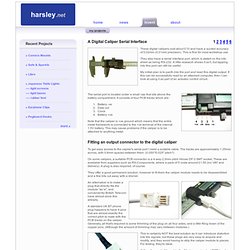 The tracks are approximately 1.25mm across, with 0.6mm spaces between them. (0.050"/0.025" pitch?) On some calipers, a suitable PCB connector is a 4-way 2.0mm pitch Hirose DF-3 SMT socket. These are available from suppliers such as RS-Components, where a pack of 5 costs around £1.50 (inc VAT and delivery). A plug is also required, of course. They offer a good permanent solution, however to fit them the caliper module needs to be disassembled and a few bits cut away with a dremel. An alternative is to make a plug that directly fits the module "as is", and conveniently British Telecom have almost done this already. A standard UK BT phone plug happens to have 4-pins that are almost exactly the correct pitch to mate with the PCB tracks on the caliper. 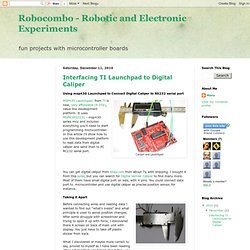 It uses MSP430G2231 - msp430 series mcu and includes everything you'll need to start programming microcontroller. In this article I'll show how to use this development platform to read data from digital caliper and send then to PC RC232 serial port. Yuriy's Toys: DRO Project Downloads. This page contains pre-compiled firmware and Android software used by the Android DRO project. 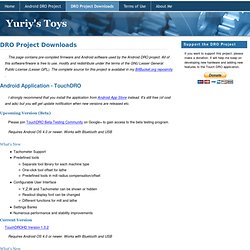 All of this software/firware is free to use, modify and redistribute under the terms of the GNU Lesser General Public License (Lesser GPL). The complete source for this project is availabel in my BitBucket.org reposiroty . Android Application - TouchDRO I strongly recommend that you install the application from Android App Store instead.

It's still free (of cost and ads) but you will get update notification when new versions are released etc. Upcoming Version (Beta) Please join TouchDRO Beta Testing Community on Google+ to gain access to the beta testing program. Requires Android OS 4.0 or newer. What's New Current Version. Reading Digital Callipers with an Arduino / USB. Reading digital calipers with an Arduino - Nut & Bolt. What do you use to measure sizes accurately? 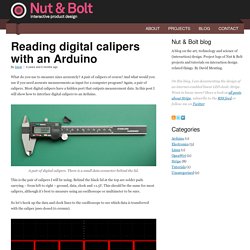 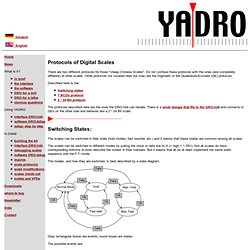 Do not confuse these protocols with the ones (and completely different) of other scales. Other protocols not covered here (for now) are the Digimatic or the Quadrature-Encoder (QE) protocols. Described here is the: The protocols described here are the ones the DRO:int4 can handle. Switching States: The scales can be switched in their state (hold modes, fast transfer, etc.) and it seems that these states are common among all scales.

Foro q contiene manual escaneado. My digital calipers are not bad at all as regards battery use.I don't buy the calipers - or any battery-operated tools - or the batteries from what seems the be our equivalent of Harbour Freight in the US.I only buy mine from suppliers that deal directly with and cater for "the Trade" and where "Handy-man" and the DIY crowd are not really catered for. 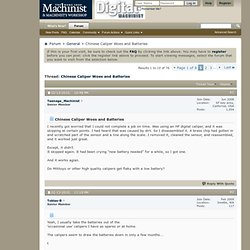 The "for cheap" crowd are wasting their time going there. In short, they cater to those who not only rely on those tools to make a living. Most of their business is "return" and "by referral". Most businesses will pay the premium for the better item, service and warranty as time and reliability and service are "money". Cheap chinese digital calipers and you.

Some time ago I bought a bunch of cheap Chinese digital calipers and I was surprised to find that there is a port on almost all of them out the top. 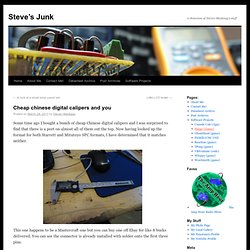 Now having looked up the format for both Starrett and Mitutoyo SPC formats, I have determined that it matches neither. This one happens to be a Mastercraft one but you can buy one off Ebay for like 8 bucks delivered. You can see the connector is already installed with solder onto the first three pins. the pinout is as follows, from left to right looking at the face: GroundDataClock+1.5v (or whatever the battery happens to be) Here’s a bit of a closeup: