Rafael Freyre uses local materials for House in Azpitia. Stones from surrounding mountains and bricks from a local kiln were used to build this house bordering a desert in Peru, so it appears "like a new layer on the landscape" (+ slideshow). 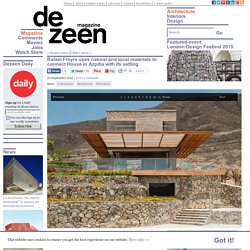 House in Azpitia was designed by Lima-based architect Rafael Freyre for a couple in their 50s, who wanted a summer home where they could entertain friends and family and feel closer to nature. It is in a valley near the village of Azpitia, 90 kilometres south of Lima, between a mountainous desert and a green, low-lying area of vineyards.

"You could say the owners were looking for a post-urban experience," Freyre told Dezeen. "The area is known for its vineyards and pre-Columbian ruins, and has become a kind of natural oasis for people escaping the big metropolis of Lima. " Freyre chose local and natural materials to make the house feel more connected to its setting, including bricks from a nearby kiln for the cladding, and stone from the surrounding mountains for the garden's retaining walls. Scenario lowers a ceiling to create a sunken roof terrace. By lowering the ceiling of this London home, Scenario Architecture has created a view between the living room and the roof terrace, allowing parents to keep an eye on their children when they play outside (+ slideshow). 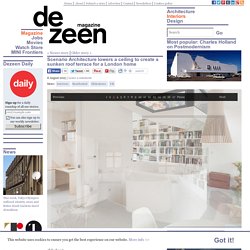 North London-based Scenario extended and remodelled the terrace house in Hackney for a young family, who wanted a view from the living space to the garden. "This is something they enjoyed in their previous home, but it seemed impossible to recreate here, given it's a terrace house with outdoor space on the roof," lead designer Ran Ankory told Dezeen. "Instead, we decided to pull a segment of the roof terrace down into the living space to create a relationship between the two," he continued. "Another welcome side effect was that it created a view of the sky from inside, and also brought more light into the living space, and to the floor below via the stairwell. " Large pine-framed windows were added to the first and second floors to bring in more light. Hampstead loft conversion has a hidden library door.

A bookshelf slides back to reveal a secret study inside this loft, renovated by architect Alexander Martin for an Arts and Crafts-style house in London's Hampstead. 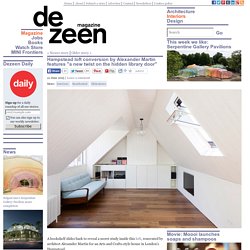 The formerly disused space now provides a guest room and study for the north-London home, which is owned by a couple who both work in the creative industries – one in photography, and the other in television. "The clients wanted it to function as an extension of the house, but there was also to be a feeling that you were going on holiday when you went upstairs," explained Martin. "They wanted it to be a study area, a living/sleeping area and a general hangout space for the family. " The space has a T-shaped plan, so it made sense to divide it into three rooms. The south-facing area is the widest of the three wings, so this became the living space.

To create an extra level of privacy for this third room, it was concealed behind a moving wall with an integrated bookshelf. Odessa-apartment_070615_24. Sands Point House by Ole Sondresen. Architect Ole Sondresen has designed the contemporary renovation and addition to a 19th century farmhouse on Long Island in New York. 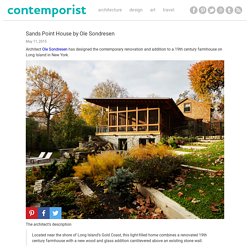 The architect’s description Located near the shore of Long Island’s Gold Coast, this light-filled home combines a renovated 19th century farmhouse with a new wood and glass addition cantilevered above an existing stone wall. This Small Apartment In New York Has A Moving TV Wall. MKCA have designed a 390 square foot apartment interior in New York, that features a movable wall. 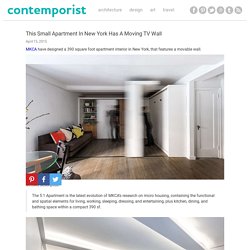 MKCA’s description The 5:1 Apartment is the latest evolution of MKCA’s research on micro housing, containing the functional and spatial elements for living, working, sleeping, dressing, and entertaining, plus kitchen, dining, and bathing space within a compact 390 sf. A motorized sliding storage element glides from one end of the room to the other, revealing and exchanging spaces between daytime and nighttime zones. As the moving volume pulls away from the wall, it reveals a dressing room zone with built-in dresser drawers and clothing storage. 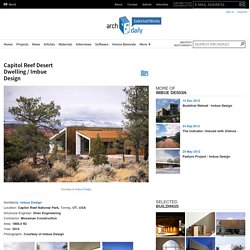 Tucked away in a remote desert location just outside of the U.S. Capitol Reef National Park is a plot of land with some of the most impressive rock formations in the world. The owners of the plot, two highly intelligent professionals with minimal design sensibilities and sharp wit, came to Imbue Design requesting the design of a small campus of structures to occupy the desert landscape. The solution came by way of multiple shed roof forms extruded along ‘L’ shaped paths. Reflecting the red rock megaliths that protrude out of the horizontal landscape, the sharp lines of the house rise above a shroud of vegetation to stand in contrast to ancient, twisted juniper trees. 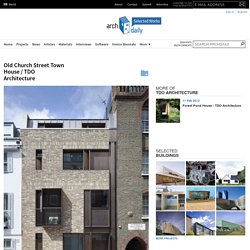 TDO Architecture were commissioned by residential developer Echlin to design an exceptional architectural addition to this historic street. TDO Architecture’s ambition was to address this narrow, mid terraced plot with eclectic adjacent buildings and the challenge of maximising natural daylight to the new proposed single aspect basement level. The resulting house has just been shortlisted for the RIBA London Awards 2015 and continues the street’s fine tradition of contemporary residential architecture, to which Walter Gropius, Maxwell Fry and Serge Chermayeff contribute. 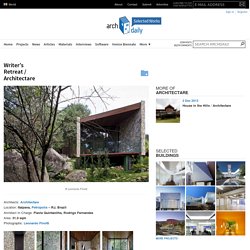 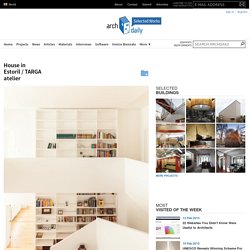 The House in Estoril refurbishment project has taken as starting point the pre-existing layout with some relevant spatial qualities deserving to be preserved and explored. Conversely, it was necessary to adapt the house to contemporary life, to become functional and in line with the expectable comfort requirements. Perforated brickwork used to renovate house in Vietnam. Perforated brick walls enclose the concrete structure of an old house in central Vietnam, which has been remodelled by architecture studio Tropical Space (+ slideshow). 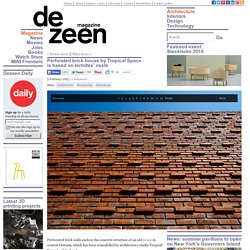 By carefully configuring the design and choosing the materials and colours, Engel Architecten has tried to blend in the building with its surroundings rich of pine trees and heath.This villa is designed for a lot in a newly developed residential area named Kerckebosch, east to the centre of Zeist . The surroundings are characterized by wooded areas adjacent to a newly created open moorland.

People dwell where the vertical and the horizontal intersect, awed by trees, fearing beasts and groping for their coordinates.” Shuntaro Tanikawa. Mazama House by Finne Architects. Finne Architects have designed the Mazama House, located in the Methow Valley of Washington State. Also designed by Finne Architects are some of the custom furniture pieces shown throughout the house. From the architect The Mazama house is located in the Methow Valley of Washington State, a secluded mountain valley on the eastern edge of the North Cascades, about 200 miles northeast of Seattle.The house has been carefully placed in a copse of trees at the easterly end of a large meadow. Two major building volumes indicate the house organization. A grounded 2-story bedroom wing anchors a raised living pavilion that is lifted off the ground by a series of exposed steel columns. House in Hampstead / Cullinan Studio. Architects: Cullinan Studio Location: Hampstead, London NW3, UK Project Architect: Kevin Goh Project Director: Carol Costello Area: 100.0 sqm Photographs: Paul Raftery Structural Engineer: John Romer Main Contractor: Cape Construction Services Engineer: Synergy Consulting Landscape Architect: DesignWild From the architect.

Much of the original integrity of this Grade II listed Georgian house had been lost through a series of clumsy interventions. The house was poorly planned – with no real central living space or easy flow from one part to another. We did not want to simply add on more living space but rather improve the upper and lower ground floors of the house in a way that worked with the existing building, both internally and externally. The Dune Road Residence by Stelle Architects.