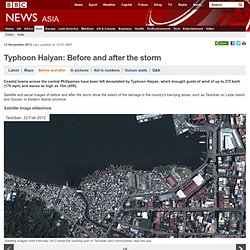 Satellite and aerial images of before and after the storm show the extent of the damage in the country's low-lying areas, such as Tacloban on Leyte Island and Guiuan, in Eastern Samar province. Satellite image slideshowContinue reading the main story Satellite images from February 2012 show the bustling port of Tacloban and communities near the sea. The latest images, taken just after the storm, show homes and buildings destroyed. A shot of the headland from 2012 shows pontoons and moorings for boats near people's homes. The storm surge that hit Tacloban seems to have washed away the pontoons and shoreside houses. Anibong, just along the coast from Tacloban, has a distinctive red-tiled warehouses (bottom left) next to a school. Typhoon Haiyan: Before and after the storm. Typhoon Haiyan: Philippines declares state of calamity. 11 November 2013Last updated at 20:48 ET Rupert Wingfield-Hayes reports from Tacloban where families have to bury their own dead Philippine President Benigno Aquino has declared a state of national calamity to speed relief efforts for victims of Typhoon Haiyan. 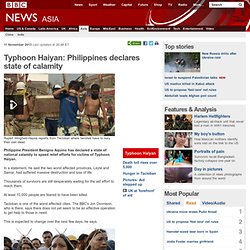 In a statement, he said the two worst affected provinces, Leyte and Samar, had suffered massive destruction and loss of life. Thousands of survivors are still desperately waiting for the aid effort to reach them. At least 10,000 people are feared to have been killed. Tacloban is one of the worst affected cities. This is expected to change over the next few days, he says. "One shirt. The BBC's George Alagiah reports from a makeshift distribution centre at Manila airport Hundreds of thousands more people have been displaced after the high winds and floodwaters destroyed their homes. The UN Secretary General Ban Ki-moon said the UN would launch a large-scale humanitarian plan on Tuesday. Struggle. Typhoon Haiyan: how does it compare to other tropical cyclones?

Image from Japan Meteorological Agency's MTSAT of Haiyan over the Leyte Gulf, Philippine Sea. Photograph: Zuma/rex Hitting the Philippines with winds of 195mph, typhoon Haiyan has been described as the strongest tropical cyclone to make landfall in recorded history. The category five storm - which has also been called Yolanda in the Philippines - is reported to have had speeds at landfall of 195mph and gusts of up to 235mph, meaning that it is believed to be stronger than the world's last strongest tropical cyclone, hurricane Camille, which was recorded as making landfall in Mississippi with 190 mph winds in 1969. The Guardian's south-east Asia correspondent, Kate Hodal, writes today:

Philippines calls for help as huge rescue operation begins after typhoon Haiyan. A huge rescue operation is under way in the Philippines to help the victims of typhoon Haiyan, which may have killed more than 10,000 people in the city of Tacloban alone.President Benigno Aquino, who landed in Tacloban on Sunday to get a firsthand look at the disaster, said the casualties "will be substantially more" than the official count of 151, but gave no figure or estimate. 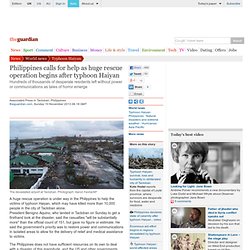 He said the government's priority was to restore power and communications in isolated areas to allow for the delivery of relief and medical assistance to victims. The Philippines does not have sufficient resources on its own to deal with a disaster of this magnitude, and the US and other governments and agencies were mounting a major relief effort, said Philippine Red Cross chairman Richard Gordon. 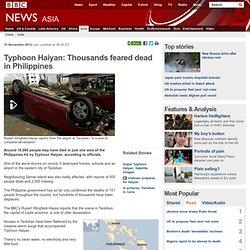 One of the worst storms on record, it destroyed homes, schools and an airport in the eastern city of Tacloban. Neighbouring Samar island was also badly affected, with reports of 300 people dead and 2,000 missing. Typhoon Haiyan: 'There are many, many dead bodies' - Philippines Red Cross. Typhoon Haiyan: Hundreds feared dead in Philippines. 9 November 2013Last updated at 15:54 ET Richard Gordon, chairman, Red Cross Philippines: "There are many, many dead bodies" 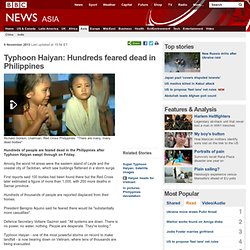 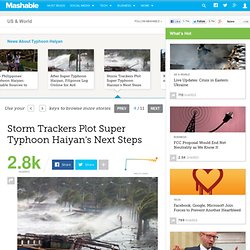 Haiyan is now making its way toward Vietnam, where it is expected to make landfall this weekend. Esri's interactive map below tracks the storm's most current position. Select points in its path to expand pullouts of data provided by the National Hurricane Center and the Joint Typhoon Warning Center: On Friday afternoon Eastern time, Haiyan's wind speeds have slowed down to 130 miles per hour and will gradually weaken as it approaches Vietnam's eastern coast on Saturday. While the typhoon bypassed the Philippine capital city of Manila, it pummeled the Eastern Visayas region. Many Filipinos who still had power and Internet access, including government agencies, logged online to disseminate information, find family members and provide sources for disaster relief. Image: Charism SAYAT/AFP/Getty Images. Typhoon Haiyan compounds Philippines earthquake devastation.

More than 100 killed in one Philippine city by Super Typhoon Haiyan. NEW: Philippine cabinet secretary fears death toll will grow in eastern area"It looks as though a tsunami swept through here," CNN journalist says of TaclobanThere are more 100 bodies on the streets of Tacloban, an official saysMajor coastal city of Tacloban took brunt of storm with water rising 40 to 50 feet Are you in the affected area? 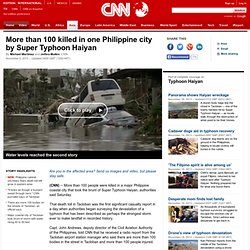 Send us images and video, but please stay safe. Haiyan Leaves At Least 100 Dead in Philippines. By Eric Leister, Meteorologist November 13, 2013; 8:45 PM Weather across Asia is detailed in the above AccuWeather.com video. 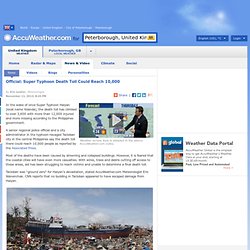 In the wake of once-Super Typhoon Haiyan (local name Yolanda), the death toll has climbed to over 3,600 with more than 12,000 injured and more missing according to the Philippines government. Typhoon Haiyan the biggest yet as world's tropical storms gather force. When typhoon Haiyan - known in the Philippines as Yolanda - pounded into the islands of Samar and Leyte at 4.40am after picking up speed on a 900-mile track across the Pacific, the US navy's warning centre, JTWC, in Honolulu, calculated its winds to be gusting at up to 235mph (380kph). 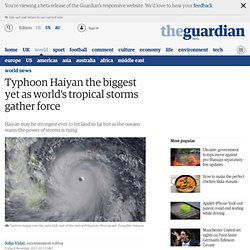 This would make it the fourth most intense tropical cyclone ever recorded and possibly the strongest to have ever hit land. By comparison, St Jude, the storm that hit in southern England last month, had winds gusting to 99mph. As Filipino communities calculated the flood and wind damage done in the 25-mile-wide path of the storm, meteorologists questioned claims that Haiyan was the strongest ever to make landfall. "All we can say at this stage is maybe. The estimates of wind strength and central pressure are just that – estimates – albeit from well-attested satellite techniques developed over decades. Typhoon Haiyan brings destrution and displacement to Philippines - video. Typhoon Haiyan: how does it compare to other tropical cyclones? 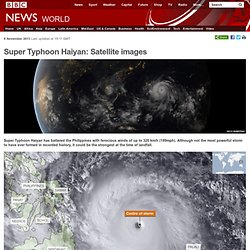 Although not the most powerful storm to have ever formed in recorded history, it could be the strongest at the time of landfall. Satellite images show the extent of the storm as it approached the Philippines on 7 November. At times it stretched 600km (372 miles) across. If the same storm was placed over a map of Europe it would stretch from London to Berlin.

How Super Typhoon Haiyan would stretch if placed over Northern Europe Super Typhoon Haiyan is the 25th tropical storm to enter Philippine territory this year and reports suggest there have been sustained winds of some 320 km/h (199mph) with gusts of up to 378 km/h (235mph). The "worst" storm is hard to define as such events differ in extremes of wind speeds or gusts, pressure, damage or loss of human life. As it happened: Typhoon Haiyan hits Philippines.